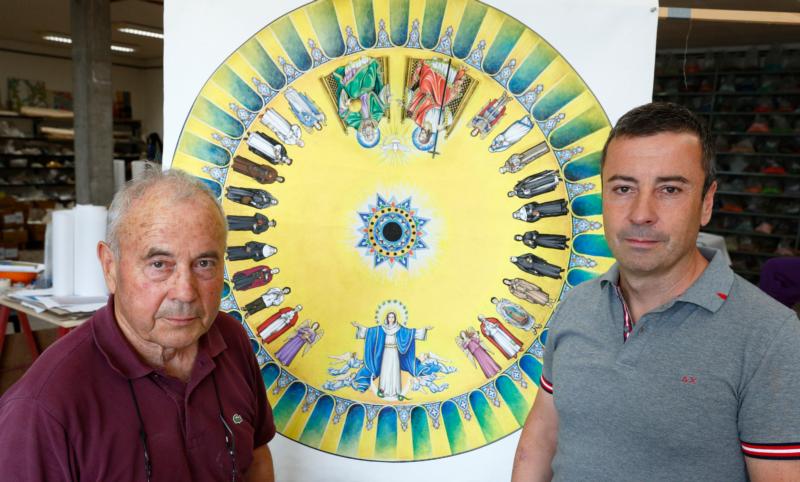 Giovanni Travisanutto, founder of Travisanutto Giovanni mosaic studio, and his son, Fabrizio, pose in 2016 at their shop in Spilimbergo, Italy. They stand next to an artistic rendering of the mosaic design for the central dome of the Basilica of the National Shrine of the Immaculate Conception in Washington. (CNS photo/Paul Haring)

WASHINGTON (CNS) — Giovanni Travisanutto’s mosaic career began when he was an 11-year-old boy standing on a step stool to reach the workbench at the mosaic school in Spilimbergo, Italy.

It ended with him once again reaching new heights as he stood atop scaffolding 150 feet up, installing the mosaic section that would complete both his career and the original plans for the Trinity Dome in the .

As he sat in the pews of the shrine’s Upper Church Dec. 7, looking up at the 18,300-square-foot mosaic, the founder of the Italian studio that completed the dome artwork recalled how he entered the mosaic craft because he had no other choice.

In the aftermath of World War II, Travisanutto’s hometown of Spilimbergo, northeast of Venice, was destroyed. The only school remaining was the Scuola di Mosaico, where people from around the world are trained in the mosaic craft. When Travisanutto completed elementary school, he began classes there.

Because of his short height, Travisanutto had to pull up a block on which to stand so he could work. At first, he was discouraged from doing the work and took a brief break from classes. He soon returned and eventually graduated, thanks to the help of “a special teacher” who “understood he had to do something to make me on the right track, and he did it,” Travisanutto said.

That teacher, now 107 years old, came in his wheelchair to the large warehouse where Travisanutto, his son Fabrizio and other workers were completing the mosaic. The father-son team had rented space separate from their studio because the mosaic was so large, with the image of Mary reaching more than 31 feet tall by 33 feet wide.

Travisanutto’s studio, Travisanutto Giovanni, which he founded in 1980, also completed the mosaics for the national shrine’s Knights of Columbus Incarnation Dome, Redemption Dome, and Italian and Hungarian chapels. Travisanutto said every time he visited he would look at the Trinity Dome and think it would be impossible to install a mosaic there.

“This one was just a dream,” he said. “We said this would never happen.”

When he received a call from Msgr. Walter Rossi, rector of the national shrine, in September 2015, telling him that they wanted his studio to make the Trinity Dome Mosaic, Travisanutto said he was happy at first, but that he soon thought, “Oh gee, what do we do now?”

His team had the same amount of time to work on the Trinity Dome as it did for the other two domes, but it was five times larger.

The Travisanuttos needed more than the usual 10 workers to complete such a large project in so little time, so mosaic workers from different workshops in Spilimbergo — known as “town of mosaics” — joined the effort. From March 2016 until April 2017 the team worked for 10 hours a day, six days a week.

“You are not allowed to be sick. And no vacation,” Travisanutto said. “Otherwise, we would never finish.”

Despite the grueling schedule, Travisanutto said everyone was excited to work on the project. Washington Cardinal Donald W. Wuerl visited the workshop at one point. He went around to each workbench, placing a stone in each section that was being worked on.

The mosaic process began with color drawings to scale, which the studio then blew up to the actual size that would be placed in the dome. After the designer approved the larger drawings, workers cut the paper into 30,000 sections, which were then numbered to correspond with thousands of color shades.

Each part of the mosaic has precise coloring. For example, the blue garment worn by St. Mark the Evangelist has at last 20 different shades of blue in it, and each person’s face has about 30 different shadings.

The entire mosaic is made up of more than 14 million pieces of Venetian glass, called “tesserae,” which the workers hand cut with a hammer to create the right size for the design. For shipping, the pieces filled 60 crates.

“When we decorate the church, you feel that you do something for your religion, for your people, for the future of your religion,” Travisanutto said.

On June 16, Travisanutto joined Cardinal Wuerl and Msgr. Rossi as the last section of the mosaic was set in place. With the project now completed, Travisanutto, who will turn 80 soon, said he will still stop by the mosaic studio at times to greet the workers, but he trusts his son, who now runs the company, to take over the work.

“For me, (learning we would make the mosaic) was the best news I had because I knew I would finish with this one,” he said. “This is a nice way to finish. … It is a dream that came true.”