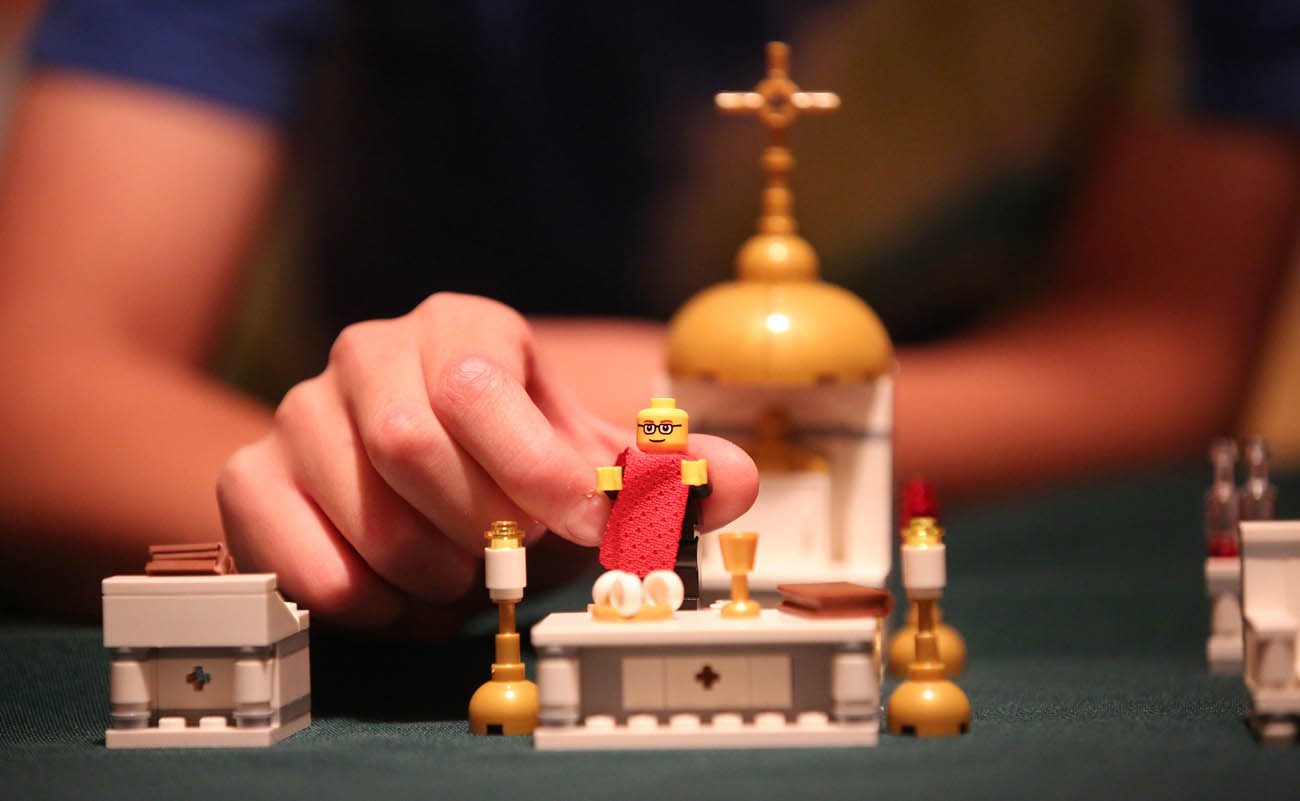 Leopold Maas places the vested priest figure into his Lego Mass scene in early September in the dining room of his home in St. Paul, Minn. His father, Stephen, created the Lego Mass kit and sells it to families who wish to have a Catholic-themed Lego set. (CNS photo/Dave Hrbacek, The Catholic Spirit)

ST. PAUL, Minn. (CNS) — Stephen and Jennifer Maas’ family business, Domestic Church Supply Co., carries one product: a Lego kit that brings the mystery of the Mass into the living rooms of families around the world.

“Father Leopold Celebrates Mass” began as a quirky passion project, but it has morphed into a popular and successful ministry for Stephen, 39, and Jennifer, 42, and their five home-schooled children. The oldest is 10-year-old Leopold, whom they call “Leo.”

It all began for these parishioners of Nativity of Our Lord in St. Paul during the search for Leo’s first Communion present. Among the standard rosaries, devotionals and holy cards, nothing seemed likely to excite their young son.

What they wanted was a Lego kit that Leo — an avid Lego fan — could use to act out the Mass. There was just one problem: It didn’t exist. “So,” said Stephen, “that got me thinking: How come there’s no priest in Legoland?”

That question launched a year-and-a-half-long process of “tinkering.” Stephen raided his son’s Lego bins and began fiddling with different brick combinations. Leo’s first Communion came and went as Stephen continued to test out miniature altars and ambos, going through eight or nine versions of a Lego tabernacle.

Wanting the set to be as complete as possible, Stephen found someone who could print a white collar onto a black-clothed Lego figurine and gold etching onto Lego “books” to create a lectionary and Roman Missal.

For the vestments, he began roaming through fabric stores searching for a lightweight material that would lie flat on the small figure. He finally settled on Nike athletic fabric, laser-cut for the purpose.

The whole family got involved, taking notes whenever they visited a new church. The kids and their friends acted as consultants, testing out an early version of the instruction manual.

The Maases knew that they wanted to share the product they were creating with others, so as they tinkered, they began asking a crucial question: Would it sell? They researched potential copyright issues and discovered that, according to the first-sales doctrine, once a product has been purchased, the original creators have no say in what happens to it.

They took the plunge.

Stephen ordered supplies from BrickLink, an online store where Lego enthusiasts can buy huge quantities of bricks in specific sizes, shapes and colors from collectors around the world. He and Jennifer got to work assembling the kits each night after the kids went to bed.

The product launched at the Minnesota Catholic Homeschool Conference in May 2015. Word spread on social media. Soon, Catholic bookstores across the United States and the United Kingdom, including the online store Holy Heroes, began requesting their product.

Laurie Murphy, a former employee of St. Patrick’s Guild in St. Paul, says it was one of their biggest sellers. Orders also are taken at the Maas’ website, DomesticChurchSupply.com.

“It’s really grown itself,” Stephen told The Catholic Spirit, newspaper of the of the Archdiocese of St. Paul and Minneapolis. He and Jennifer now hire an employee to assemble the kits in an outbuilding behind their house. Due to the cost of bricks and the time needed for assembly, the finished sets cost $49.99.

Stephen’s previous work as a graphic designer means that each finished kit looks entirely professional, down to a beautifully photographed box and glossy instruction manual, neither of which bear the Lego logo). The kits contain 174 genuine Lego bricks. They include three modified bricks, for the collar, lectionary and Roman Missal, plus four vestments — in green, white, purple and red.

But it’s the innovative details that make the product stand out.

That cross atop the tabernacle? In typical Lego sets, it serves as old-fashioned wheel spokes. Those graceful candlesticks? Made with tiny Lego telescopes. In addition to the tabernacle, altar, ambo, presider’s chair and credence table, there are cruets, a lavabo dish, a paten with hosts, a chalice, candles and a sanctuary lamp. A tiny “bone” serves as a saint’s relic inside the altar.

Stephen and Jennifer have one goal in mind for their little business: to normalize the faith for children.

“We intended this to be primarily evangelistic in nature,” Stephen said. “Our goal was to get boys to bring their Lego Batmen to (play) Mass.”

Father Leopold seeks to demystify the rituals of the faith, showing kids that the Mass and the priesthood are integral parts of everyday life.

The sets’ fans have more to look forward to. The Maases plan to launch a confessional set in the spring of 2018, and they also are expecting to design a line of saint, pope and bishop mini-figures sometime in the future.

One thing is clear: Legoland will never be the same.

Schmidt writes for The Catholic Spirit, newspaper of the Archdiocese of St. Paul and Minneapolis.