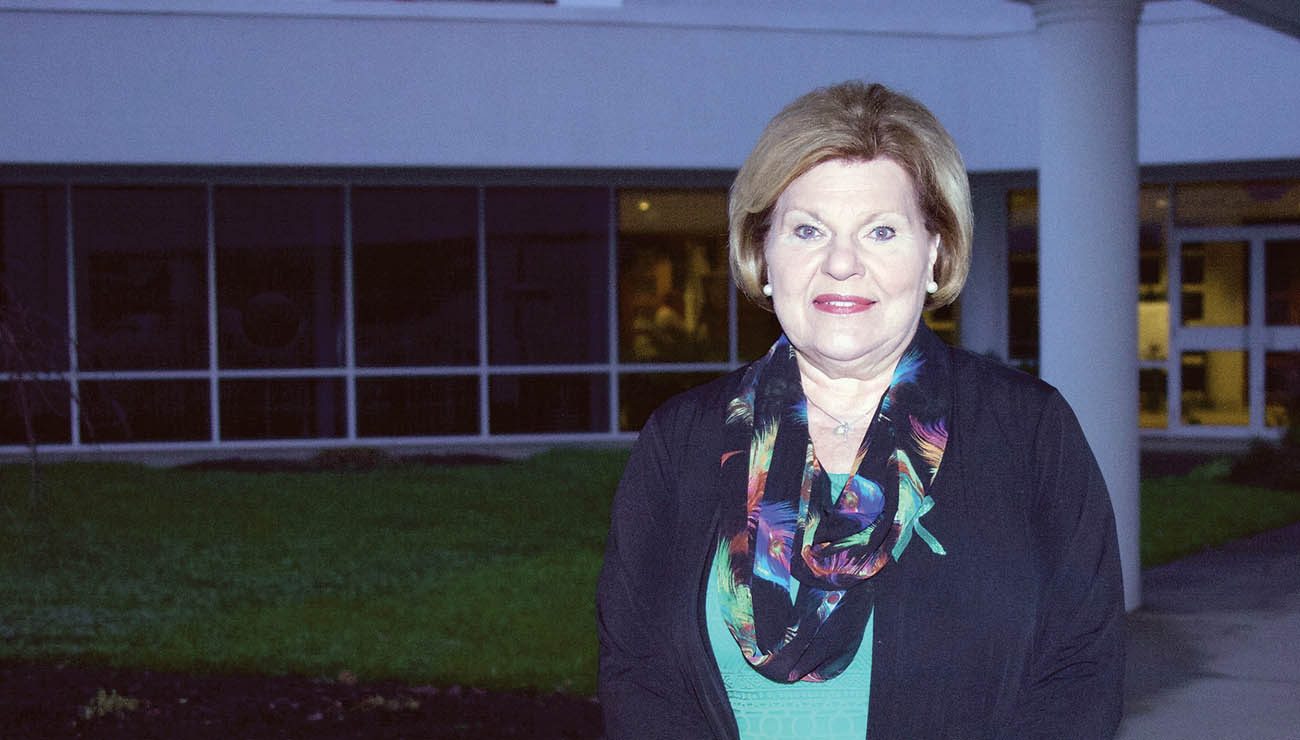 Ellen Condron, parish nurse at All Saints Parish in Bridgeport, W.Va., is pictured in front of the church Nov. 14 before the seventh installment of "Community Conversations on Substance Abuse," a program she spearheaded in response to the opioid crisis in West Virginia. (CNS photo/Colleen Rowan, The Catholic Spirit)

BRIDGEPORT, W.Va. (CNS) — Ellen Condron wanted to start a conversation about what is happening in her beloved state of West Virginia, where the opioid crisis claimed the lives of more than 880 people last year.

“It breaks my heart,” she said. “You see people in the newspaper every day, young people — ‘died at home.’ I feel like we’re losing a whole generation. … Grandparents are raising grandchildren because the parents can’t take care of them.”

A 40-year member of All Saints Parish in Bridgeport, where she also serves as the parish nurse, Condron felt driven to do something.

She felt especially compelled to do something after her nursing students relayed stories to her about children suffering because of their parents’ addictions, she told The Catholic Spirit, newspaper of the statewide Diocese of Wheeling-Charleston.

“They were coming to school hungry,” Condron said her students would tell her. So she asked them, what could they do about this. Their answer: Nothing can be done.

“That’s the wrong answer,” she said.

In Harrison County, which previously held the title of having the highest number of overdose cases in West Virginia, Condron spearheaded “Community Conversations on Substance Abuse” at her parish, gathering community leaders and residents to talk about the problem and possible solutions with the help of the parish’s Social Concerns Committee.

Initially planning this to be a one-time forum in April 2016, the program has garnered so much interest that it held its seventh conversation in November.

Throughout the Bridgeport area, green ribbons can be seen on the doors of businesses, organizations, churches and even homes indicating that community members are advocating for their neighbors suffering from drug addiction.

Condron had the ribbons made to raise awareness of the need for treatment for persons with addiction or mental illness.

“I feel they are the lost souls of our society, and we need to advocate for them,” she said of those suffering from addiction and why she wanted to start Community Conversations. “Addiction is not a choice. Addiction is a disease. … Treatment needs to be long term. It takes a long time for the brain to heal, but it can.”

Since its inception, Community Conversations has hosted speakers from state and local government, law enforcement, health care leaders and organizers of prevention and recovery groups.

At the most recent gathering Nov. 13, Jim Johnson, West Virginia’s drug control policy director, reported that the state had 882 overdose deaths last year. The crisis is wide reaching, Johnson said, and it is a problem that won’t be solved overnight.

It’s a crisis that knows no social or economic boundaries, said Dr. Angelo Georges, chief medical officer at Wheeling Hospital, which is operated by the Diocese of Wheeling-Charleston. Affecting people from every walk of life, he said, the crisis also includes a rise in heroine use.

“It’s really the worst scourge I have ever seen,” Georges said. “I have never seen anything take off so fast. To me, this is the greatest plague … eminent threat to breaking down of all levels — health, death, family structure, burdening hospitals, babies born addicted — it’s awful, it’s just awful.”

The crisis has brought a rise in patients coming into the hospital’s Emergency/Trauma Center, with overdoses coming in waves, Georges said.

Most heartbreaking are babies born addicted to drugs. The condition is called NAS, for neonatal abstinence syndrome, in which newborns suffer from withdrawal from the drugs they were exposed to in the womb.

Georges, who has been personally touched as a family member dealt with addiction, said that people need to talk about what is happening, because the scope of the crisis is all over the state.

“I don’t know one family that’s not been affected by this,” he told The Catholic Spirit.

Almost three years ago, Georges was asked to be part of a task force on opioids, heading the health care arm. The task force held a summit meeting and conference on the crisis at the hospital two years ago. For years, Wheeling Hospital has had pain treatment guidelines for its emergency room. The hospital also has an opioid pain management committee which meets monthly.

The state’s opioid epidemic also one of the top concerns of Catholic Charities West Virginia’s new CEO, Beth Zarate, who wants to give the agency a larger voice in the crisis. Efforts, she said, would focus on helping those recovering from addiction to transition back into the community.

“The depth of what we do is that long-term care,” she said, “building a relationship with a family and walking the journey with them.” Right now, Catholic Charities West Virginia is looking at ways it can help with long-term strategies as a response to the crisis.

Back in Bridgeport, Condron is currently working with others in her community on making a case for establishing an Office of Drug Control Policy for Harrison County.

As for the Community Conversations she started, Condron was not sure if an eighth installment will be held. What she hopes is that people come away with a better understanding of addiction and a resolve to seeing this crisis to an end.