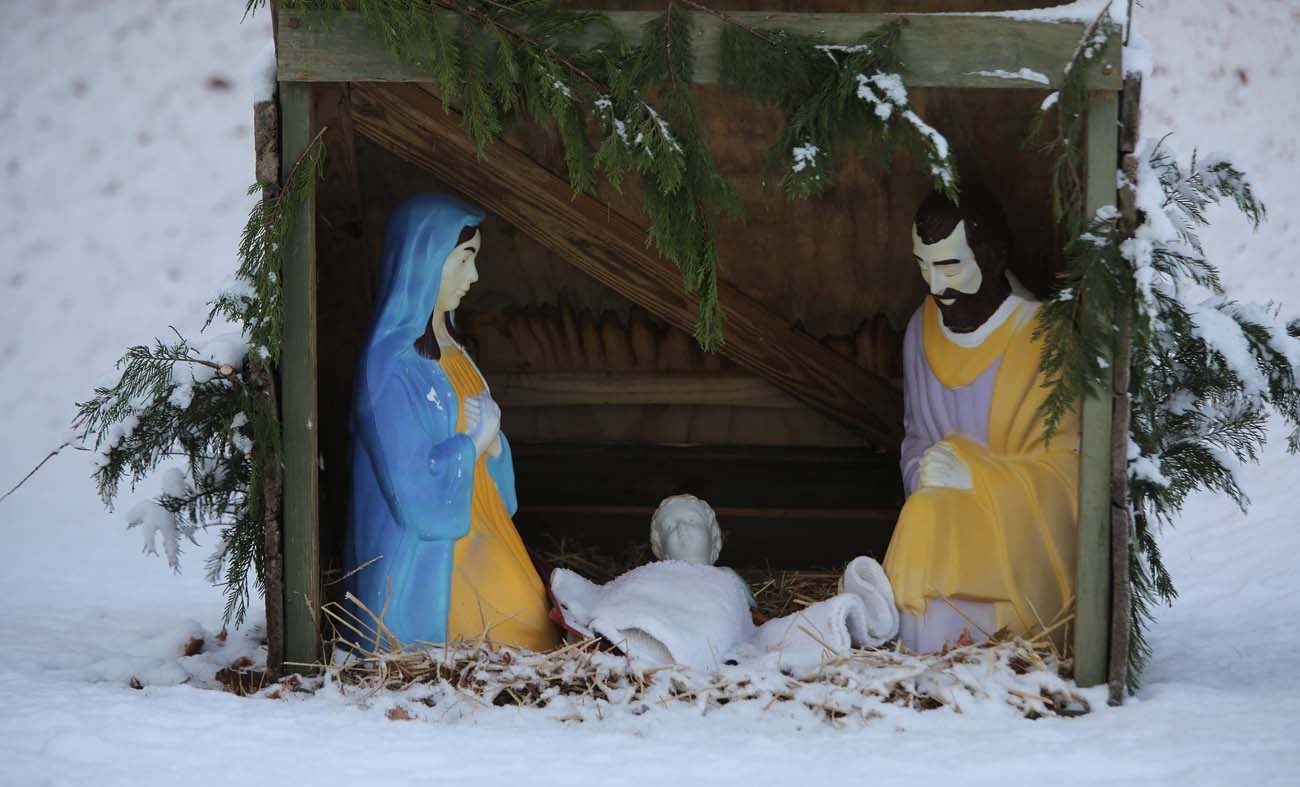 A Nativity scene is displayed in the front yard of a home Dec. 10 after a snowstorm in Chesapeake Beach, Md. (CNS photo/Bob Roller)

WASHINGTON (CNS) — The percentage of Americans who see Christmas as a religious holiday continues to slide across nearly all demographic lines.

In a telephone survey of 1,503 U.S. adults conducted Nov. 28-Dec. 4 for the Pew Research Center, 55 percent said they mark Christmas as a religious holiday. The figure in 2013, when Pew last asked this question, was 59 percent.

“Nine in 10 U.S. adults say they celebrate the holiday, which is nearly identical to the share who said this in 2013,” said the survey, whose results were released Dec. 12. “About eight in 10 will gather with family and friends. And half say they plan to attend church on Christmas Eve or Christmas Day,” it said. Those numbers, Pew added, are roughly the same as those of 2013.

“Most respondents in the new poll say they think religious aspects of Christmas are emphasized less in American society today than in the past. But relatively few Americans both perceive this trend and are bothered by it,” the Pew survey said.

“Overall, 31 percent of adults say they are bothered at least ‘some’ by the declining emphasis on religion in the way the U.S. commemorates Christmas, including 18 percent who say they are bothered ‘a lot’ by this. But the remaining two-thirds of the U.S. public either is not bothered by a perceived decline in religion in Christmas or does not believe that the emphasis on the religious elements of Christmas is waning,” it added.

One flashpoint is how Americans think store clerks should greet customers at this time of the year. “Merry Christmas” is the preferred choice of 32 percent, down from 43 percent in 2012, the last time Pew asked the question. The generic “Happy holidays” or “Season’s greetings,” went up from 12 percent to 15 percent, while 62 percent said it doesn’t matter, up from 45 percent in 2012.

“One of the most striking changes in recent years involves the share of Americans who say they believe the birth of Jesus occurred as depicted in the Bible,” the Pew survey said.

“Today, 66 percent say they believe Jesus was born to a virgin, down from 73 percent in 2014,” the last year this question was asked, it noted. “Likewise, 68 percent of U.S. adults now say they believe that the wise men were guided by a star and brought gifts for baby Jesus, down from 75 percent. And there are similar declines in the shares of Americans who believe that Jesus’ birth was heralded by an angel of the Lord, and that Jesus was laid in a manger as an infant.”

“Overall, 57 percent of Americans now believe in all four of these elements of the Christmas story, down from 65 percent in 2014,” the Pew survey added, including a decline from 81 percent to 76 percent among Christians. “This decline has been particularly pronounced among white mainline Protestants,” it said.

Millennials, including Christian millennials, also are less likely to believe in each of the four elements in the biblical account.

Regarding their Christmas observances, 65 percent of Catholics said they celebrate it as a religious holiday, down from 68 percent in a 2013 survey, and 51 percent see it as more religious than cultural, down from 59 percent. Eighty-nine percent said they would gather with family and friends, up from 85 percent, and 68 percent they would go to church, down from 76 percent.

Catholics are not immune from the decline in belief about the biblical account of Jesus’s birth. In 2017, 83 percent said they believe in the virgin birth (86 percent in 2014), 82 percent said an angel announced Jesus’ birth to shepherds (90 percent), 80 percent said wise men guided by a star brought Jesus gifts (84 percent) and 87 percent said Jesus was laid in a manger (92 percent).

In 2014, 76 percent said they believed all four elements happened; in 2017, 71 percent said that. Twenty-two percent today believe some elements but not others, compared to 20 percent in 2014.

PREVIOUS: Catholics urged to lay all fears, hopes ‘at feet’ of Virgin of Guadalupe

NEXT: Fundraising starts to aid victims of Southern California fires