As mentor and model, Msgr. Miller was ‘huge influence’ on Bishop Senior 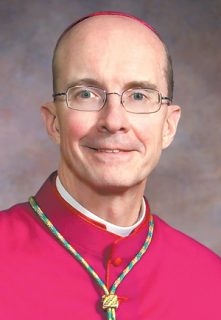 Bishop Timothy C. Senior, who is the rector of St. Charles Borromeo Seminary and the main celebrant for the funeral Mass for Msgr. John Miller on Dec. 6 at the seminary, knew him well from his own seminary days.

“He was dean of men when I was in the Theology (Division) and my formation adviser,” Bishop Senior said. “He was a great mentor to me and many other priests as well.”

“He was on the faculty for 18 years and that was the time of the implementation of the reforms of the Second Vatican Council,” he said. “There was a lot of change going on and Msgr. Miller spearheaded a lot of the implementation throughout the diocese. The seminary became a key place for liturgical formation.”

Bishop Senior recalls a rhetorical question Msgr. Miller would pose to the seminarians: “What is the difference between liturgy and life?”

The answer was, “There is none, because the liturgy flows out of life and also feeds our daily lives. The Eucharist is a reflection on who we are as Christians. It nourishes us, it teaches us, it patterns us, it forms us for leading a Christian life.” 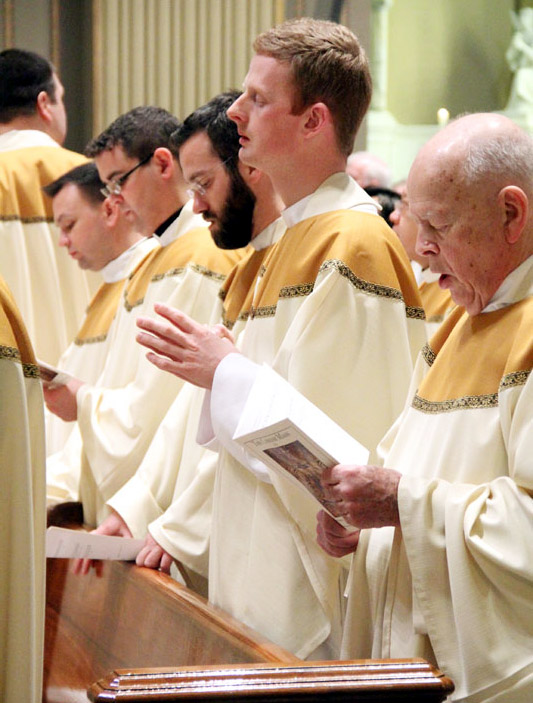 Msgr. John Miller, right, prays with his brother priests young and old during the 2015 Chrism Mass at the Cathedral Basilica of SS. Peter and Paul. Msgr. Miller’s funeral Mass will be celebrated Dec. 6.
(Photo by Sarah Webb)

An expert on liturgy, Msgr. Miller was the liturgist for the Eucharistic Congress in 1976 and the visit by St. Pope John Paul II in 1979, and remained active in that field until he was made pastor of St. Frances Cabrini Parish, Fairless Hills, in 1989.

Msgr. Miller, Bishop Senior reflected, was a man of very many interests and his work in liturgy led him into the arts. He was an opera aficionado and regular patron of the Metropolitan Opera. In the visual arts he supported the work of many artists in Philadelphia who were doing liturgical art, for example Helen Seigl and Bolton Morris.

Bishop Senior regarded Msgr. Miller as one of the true brilliant minds in the Philadelphia presbyterate.

“He was fluent in Italian and Latin and could speak Spanish, German and French,” Bishop Senior said. “He understood history and architecture; his knowledge of these things was encyclopedic.”

But first and foremost, Msgr. Miller was a priest to his core.

“He used to say the best thing we can offer our people is the sacraments well-celebrated,” Bishop Senior said. “He was a man of prayer and very much a priest in exemplary ways. Visiting the sick and being there for his people was an absolute priority. He was what Pope Francis would call someone who would go out on the margins, whether it was a homeless person or someone who was estranged.”

Summing it up, Bishop Senior said, “He was a huge influence on my life and I’m grateful for his priesthood.”