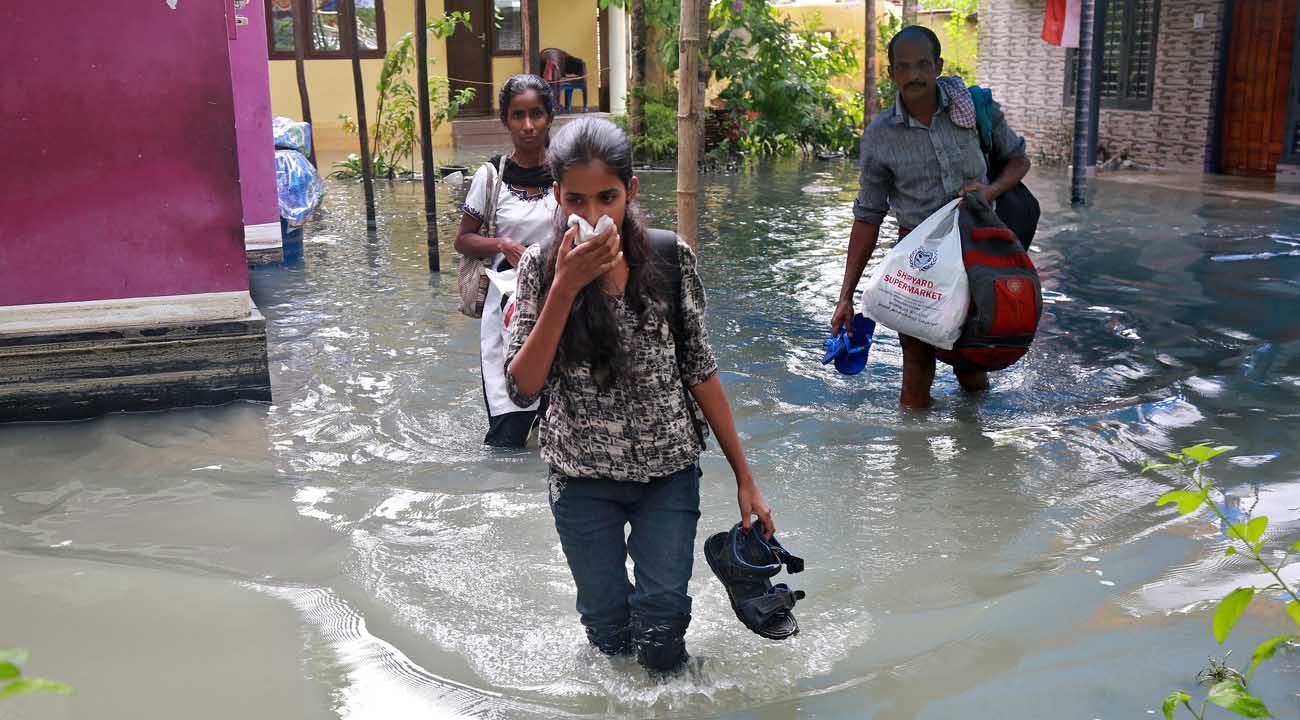 Residents carry their belongings as they evacuate their home Dec. 2 after flooding caused by Typhoon Ockhi in the coastal village of Chellanam in the southern state of Kerala, India. The storm claimed the lives of at least 32 poor Catholic fishermen who were at sea and 200 more were missing. (CNS/Sivaram V, Reuters)

THIRUVANANTHAPURAM, India (CNS) — A typhoon that rapidly developed on the southern Indian coast claimed the lives of at least 32 poor Catholic fishermen who were at sea and another 200 more were missing.

Thousands of other coastal residents had relocated to relief camps by Dec. 4, ucanews.com reported.

The confirmed deaths were in Kerala and Tamil Nadu states, according to government sources.

All the dead are Catholic men who had gone out to sea, said Father V. Wilfred, a priest of Vizhinjam parish, a fishing village near Kerala’s capital, Thiruvananthapuram.

Antony Silvaster, a Catholic fisherman in the fishing village of Vizhinjam, said there was no warning of the storm. He said that with 200 fishermen missing, the community expected the death toll to rise.

Worst affected was the coastal area near India’s southern tip, a Catholic stronghold.

Gusty winds and heavy rains began to lash the coast in southern India Nov. 30 after a depression near Sri Lanka rapidly developed into a typhoon, named Ockhi. The storm’s intensity declined by Dec. 4.

The Catholic Bishops’ Conference of India expressed solidarity with the fishing communities and offered prayers for the families affected by the storm.

“We offer our condolences to the families of all those who have lost their lives and we wish to comfort those who have been afflicted by pain and suffering caused by the devastating hurricane in the past few days,” Bishop Theodore Mascarenhas, conference secretary general, said in a statement Dec.

Archbishop Soosa Pakiam of Trivandrum and local priests traveled to the devastated area and began arranging for the delivery of relief supplies.

Father Justin Jude of Poonthura said people also lost boats and nets. He urged the government to provide adequate compensation so that fishing families could return to work as soon as possible.

Typhoons are rare on India’s west coast. The last major typhoon on the Kerala coast occurred in 1941, killing 62 people and destroying about 50,000 homes.

NEXT: Innu women testify that Oblate missionary inappropriately touched them