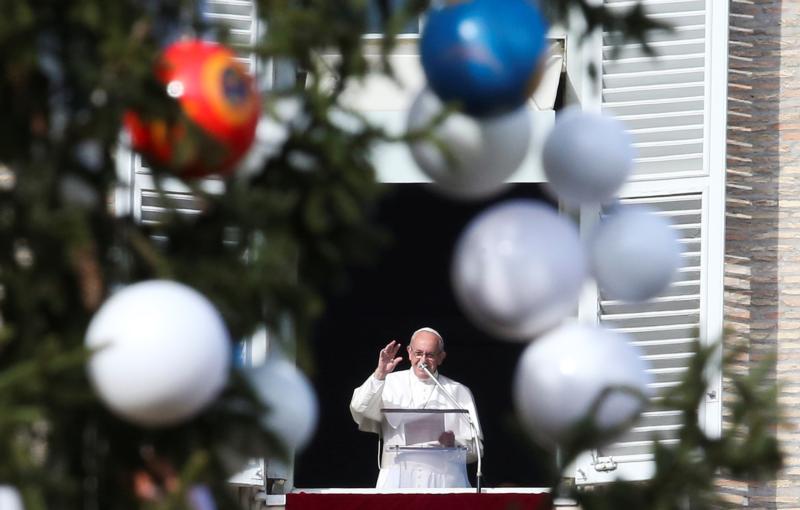 Pope Francis waves during his Angelus in St. Peter’s Square at the Vatican Dec. 3. Advent is a time to be watchful and alert to the ways one strays from God’s path, but also to signs of his presence in other people and in the beauty of the world, Pope Francis said. (CNS photo/Tony Gentile, Reuters)

VATICAN CITY (CNS) — Advent is a time to be watchful and alert to the ways one strays from God’s path, but also to signs of his presence in other people and in the beauty of the world, Pope Francis said.

Reciting the Angelus prayer Dec. 3, the first Sunday of Advent, Pope Francis told people gathered in St. Peter’s Square, “Being watchful and alert are the prerequisites for not continuing ‘to wander far from the Lord’s path,’ lost in our sins and infidelities; being watchful and alert are the conditions for allowing God to break into our existence, to give it meaning and value with his presence full of goodness and tenderness.”

Like the ancient Israelites who wandered in the desert, the pope said, “we, too, often find ourselves in a situation of infidelity to the Lord’s call; he indicates the right path, the path of faith, the path of love, but we look for happiness elsewhere.”

Advent gives people time to review the paths they have taken and to turn back to the ways of God, he said.

It is a time for paying attention to the needs of others, “trying to counter the indifference and cruelty” present in the world, the pope said. But it is also a time to “rejoice in the treasures of beauty that also exist and should be protected.”

“It is a matter of having an understanding gaze to recognize both the misery and poverty of individuals and societies, but also to recognize the riches hidden in the little things of daily life precisely where God has put them,” he said.

Pope Francis, who had returned to the Vatican late the night before after a six-day trip to Myanmar and Bangladesh, also used his midday address as an opportunity to thank everyone who had prayed for the trip’s success and everyone who had a hand in organizing it.

The pope said he carried with him “the memory of so many faces tried by life, but still noble and smiling. I carry them in my heart and in my prayers.”

PREVIOUS: Political power comes from serving, not lording over others, pope says

NEXT: In Myanmar and Bangladesh, pope calls for dialogue and respect for all