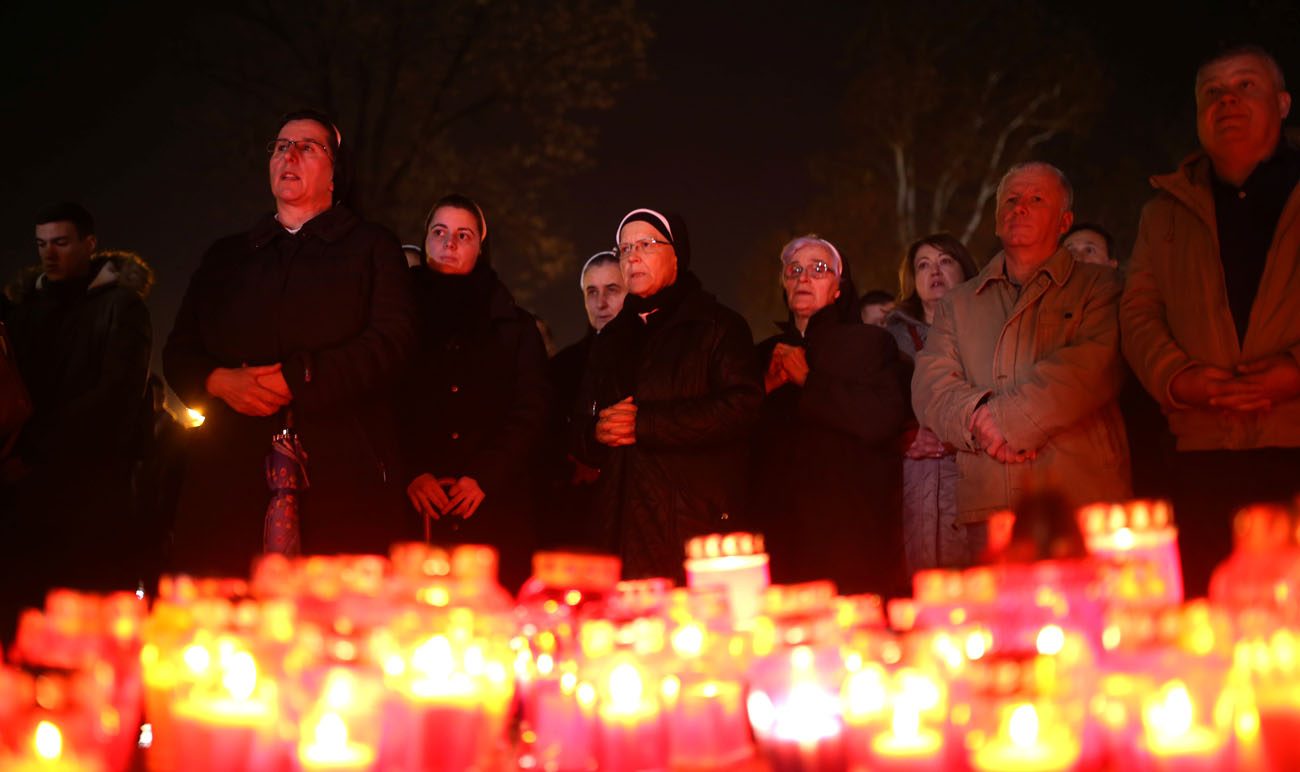 Bosnian nuns and others pray for former Bosnian Croat military chief Slobodan Praljak, who committed suicide Nov. 29, seconds after the verdict in the U.N. war crimes tribunal in Mostar, Bosnia-Herzegovina. Praljak, a former assistant defense minister of Croatia and commander of the Croatian Defense Council, was appealing a prison term of 20 years. (CNS photo/Dado Ruvic, Reuters)

“We have to live well with each other and cooperate, but we can’t build a future when lies are told about our history,” said Archbishop Zelimir Puljic of Zadar, Croatia.

“Unfortunately, this tribunal has acted from political motives and followed political goals in attempting to show everyone is equally guilty and responsible,” he said following the Nov. 29 suicide of Bosnian Croat military chief Slobodan Praljak, who died of heart failure after drinking potassium cyanide during a hearing with five other Croatian-Bosnian military leaders in The Hague.

In a Dec. 1 Croatian Radio interview, Archbishop Puljic said he believed the International Criminal Tribunal for the former Yugoslavia had not “taken account of historical facts” in accusing the officers of a “joint criminal enterprise,” and would not “contribute to reconciliation” with its “unjust verdicts.”

He added that he regretted Praljak’s action, but believed his claim to be “giving his life for the truth” had “positive connotations.” He said the tribunal judge had “reacted indecisively and coldly,” without “elementary human solidarity and compassion.”

“(Praljak’s) final act cannot be approved, because nobody can take a life. But the circumstances need to be taken into account, as well as his disappointment in seeing this as the only way out,” the archbishop said.

Ninety political and military officials, two-thirds of them ethnic Serbs, have been convicted and sentenced by the tribunal for war crimes during the 1992-1995 Bosnian war. The conflict ended with the formation of separate Serb- and Muslim-dominated territories in a single state after leaving 100,000 people dead and 2.2 million displaced.

Praljak’s appeal of a 20-year prison sentence was the last to be heard by the tribunal, which was to close Dec. 31. He denied being a war criminal and said he rejected the verdict “with contempt,” before drinking the poison.

In his interview, Archbishop Puljic said the international community had helped end the war under the 1995 U.S.-brokered Dayton Peace Accords, but had also “done a terrible injustice” to Croats by denying them rights in the new state.

He said the tribunal unjustly placed Croats “on the same pillar as Serbs,” ignoring that they were “victims of aggression” and had merely “defended themselves.”

Meanwhile, the bishops’ conference of Bosnia-Herzegovina said silence was “the most appropriate expression of feelings” after Praljak’s death, but added that it also believed Croats were victims of injustice.

“We reiterate what we repeated throughout this war, that we oppose and condemn every crime, and we are most pained by crimes perpetrated by those washed in the baptismal water of the Catholic Church,” the bishops said in a Nov. 30 statement signed by Cardinal Vinko Puljic of Sarajevo, Bosnia-Herzegovina.

“Nevertheless, we cannot and must not close our eyes before the obvious fact that, since the peace agreements, members of the domiciled Croatian nation have continued to be sent messages that Bosnia-Herzegovina is not their homeland and has no place for them. We consider this immoral, dangerous and unacceptable for the future,” the statement said.