German churches act as buffer for refugees with sanctuary program 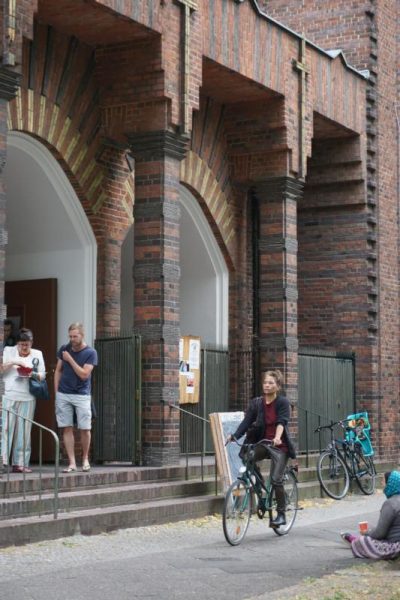 An Afghan refugee woman begs for coins near St. Christopher Catholic Church in early September in Berlin. The church has continuously provided sanctuary to refugees fearing deportation while their asylum claims are considered by German authorities. (CNS photo/Dale Gavlak)

BERLIN (CNS) — Sitting on the bare pavement outside a Catholic church, an Afghan refugee woman, dressed in a bright floral headscarf, calls out plaintively to passersby, begging for coins.

It’s a scene repeatedly played out in the German capital overwhelmed by refugees fleeing war, persecution and economic deprivation in the Middle East and Africa.

But at Christmastime and beyond, Catholic and Protestant churches are doing what they can to help those struggling and in need.

For the past quarter of a century, the nearby St. Christopher Catholic Church has continuously provided sanctuary to refugees fearing deportation while their asylum claims are considered by German authorities. The most recent people it housed escaped conflict in Syria, Ethiopia and Sri Lanka.

Such sanctuary, known as church asylum in Germany, is providing temporary protection for some 600 refugees currently who do not have a legal residence, in effect placing the church between the refugees and the public authorities and safeguarding them until their legal cases can be heard and considered.

While most German church members say they support providing sanctuary to refugees, Michael Haas, coordinator of refugee work in the Catholic Archdiocese of Berlin, told Catholic News Service that some parishes are fearful of the practice because it falls into a kind of grey area of the law. It also requires financial resources and manpower to provide the care.

Still, he said, the “church, bishops, congregations and the government in Germany have agreed that there might be a mutual trust and that the church will not abuse the system of church asylum.”

Churches, he said, have agreed to use sanctuary in “very few and particular cases after a thorough legal check,” while there appears to be a tacit agreement that the government “would not deport such cases without first having a second look at the application.”

“A family arrived with three small children in the dead of winter. They had been living on the streets of Berlin because no one could provide anything. It was terrible,” she said. Her church was too small, “But it was four weeks before Christmas. So, we said this is our ‘holy family’ this year!”

Rev. Neubert asked an Afghan Muslim receiving church asylum from her parish to read out the story of the birth of Christ as recorded in the Quran during the Gospel reading last Christmas.

“He didn’t feel so comfortable reading it in German, so I read it. I think the congregation understood better something of their own faith, while admiring something in the Islamic tradition,” she said.

The Afghan man sheltering in Rev. Neubert’s church told CNS he sought asylum because Germany wanted to deport him to Sweden, the first country he entered in Europe. However, he said he cannot return to Sweden because it, too, wants to deport him back home, where he faces certain death from militants.

“I escaped with my life from Afghanistan after receiving a threatening letter from the Taliban, because me and my brother worked with the Americans on reconstruction and security,” said the man.

Some 1.2 million people sought asylum in Germany in 2015, with around half from conflict-torn Syria, Iraq and Afghanistan. At that time, Bernhard Kellner, spokesman for the German Archdiocese of Munich-Freising, said he thought “the whole refugee aid system here would collapse without the church’s engagement.”

The tragic image of a drowned Syrian toddler on a Turkish beach and scenes of desperate refugees escaping war in rickety boats prompted Chancellor Angela Merkel, in 2015, to open Germany’s doors to any Syrian who could make it there. Her policy effectively reversed a long-standing European Union regulation that refugees must claim asylum in the country of first arrival.

However, anti-migrant sentiment has been mounting in Germany and the rest of Europe since then.

Merkel’s own political party suffered heavy losses in September’s election to the anti-immigrant far right, which surged into parliament for the very first time, raising alarm for many Germans. Merkel still has not been able to form a coalition government.

“The policies on asylum and deportation in Germany have become stricter in the last year, and so that’s why more refugees ask for help in the churches,” Jan Drunkenmoelle of the German Ecumenical Committee on Church Asylum told CNS.

The Berlin-based organization works with Catholic and Protestant churches offering church asylum to those in great need. Currently, more than 350 churches in Germany provide sanctuary to some 600 asylum seekers.

Drunkenmoelle explained that “church communities play a big role in supporting refugees. If the person seeking asylum gets a deportation letter, of course, people who know each other try to help, and this leads to more church asylums.”

“Most people get rejected not because of the persecution they experienced in their home country, but because they didn’t pursue the right legal format,” Drunkenmoelle said.

The close friendship formed between the congregation and the asylum seeker make church asylum an excellent platform for newcomers to achieve integration into German society, a key concern of the government, he added.

NEXT: Look inward, not at a mirror, pope tells Japanese university students