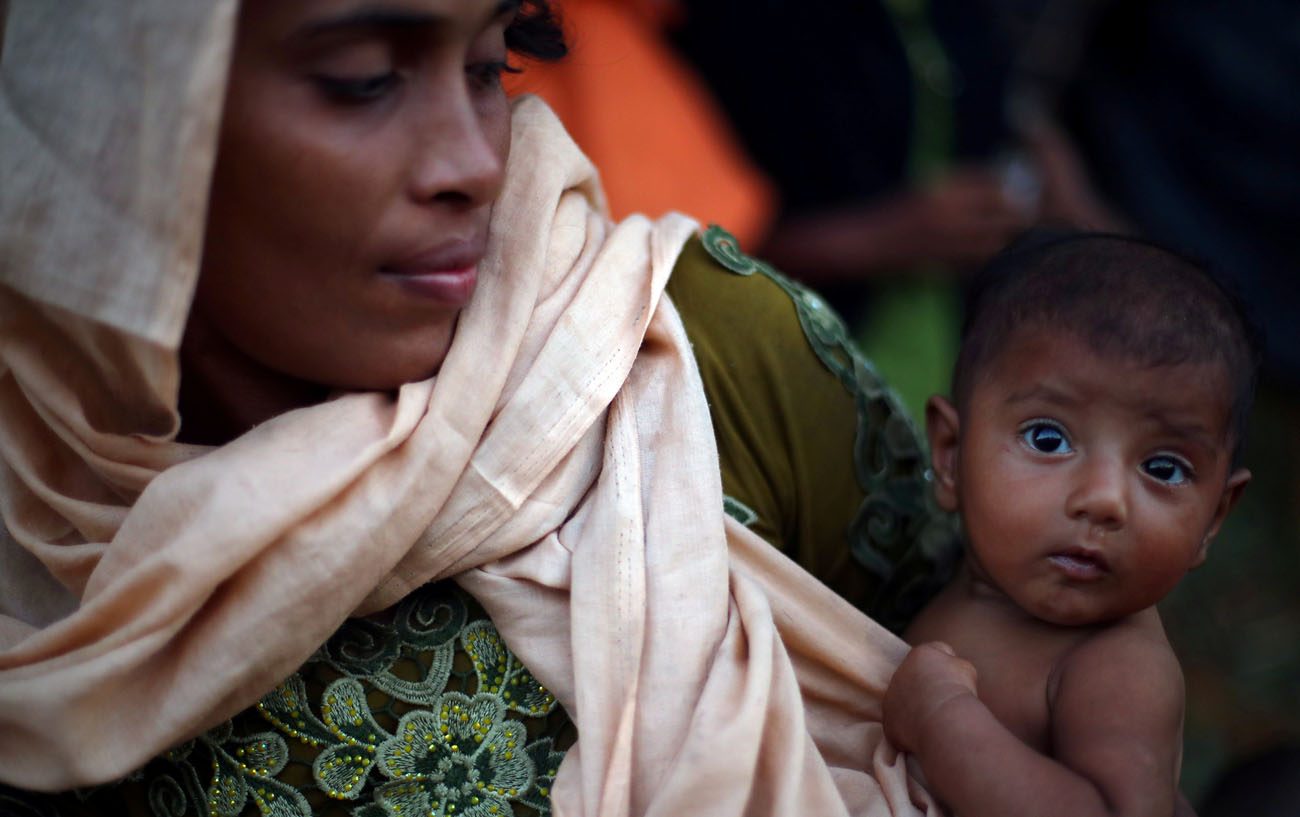 A mother and daughter are seen at a refugee camp near Cox's Bazar, Bangladesh Oct. 22. (CNS photo/Hannah McKay, Reuters)

ROME (CNS) — With so much suffering, poverty and exploitation in the world, missionary work must also include reaching out to people whose hearts are closed to receiving immigrants and refugees, Pope Francis told Jesuits in Myanmar.

“Unfortunately, in Europe there are countries that have chosen to close their borders. The most painful thing is that to take such a decision they had to close their hearts,” he said during a private audience Nov. 29 in the chapel of the archbishop’s house in Yangon.

“Our missionary work must also reach those hearts that are closed to the reception of others,” he told 31 Jesuits from different parts of Asia and Australia, who are based in Myanmar.

The Rome-based Jesuit-run journal, La Civilta Cattolica, published a transcript Dec. 14 from the private meeting in Myanmar and the pope’s private meeting Dec. 1 at the apostolic nunciature in Dhaka with Jesuits based in Bangladesh.

In both meetings, the pope listened to and answered their comments, concerns and questions, and the journal provided an English translation of the original Spanish remarks.

A Jesuit’s mission is to be close to the people, especially those who are suffering and forgotten because “to see them is to see Christ suffering and crucified,” he said in his meeting in Myanmar.

His approach, he said, is to try to visit these places and to “speak clearly, especially with countries that have closed their borders.”

“It is a serious issue,” he said, commenting on how that evening, they all would be sitting down to a full meal, including dessert, while many refugees will “have a piece of bread for dinner.”

He recalled visiting the refugees in Lesbos, Greece, and how the children he was greeting were torn between shaking his hand and reaching for candy that Ecumenical Patriarch Bartholomew of Constantinople was pulling out of his pockets.

“With one hand, they greeted me with the other, they grabbed the candy. I thought maybe it was the only sweet they had eaten for days.”

The situation of many of the refugees and stories they have told him have “helped me to cry a lot before God,” he said, particularly when a Muslim man recounted how terrorists slit the throat of his Christian wife right before his eyes when she refused to take off the cross she wore.

“These things must be seen and must be told,” he said, because news of what is happening does not reach most people, and “we are obliged to report and make public these human tragedies that some try to silence.”

The Jesuits he met in Bangladesh thanked him for talking about the Rohingya people, a Muslim minority being pushed from Myanmar’s Rakhine state and seeking refuge in Bangladesh.

“Jesus Christ today is called Rohingya,” as these people are their brothers and sisters, the pope told the Jesuits.

“Today, there is much discussion about how to save the banks. The problem is the salvation of the banks. But who saves the dignity of men and women today?”

“Nobody cares about people in ruins any longer. The devil manages to do this in today’s world. If we had a little sense of reality, this should scandalize us.”

“The impudence of our world is such that the only solution is to pray and ask for the grace of tears,” he said.

Meeting the Rohingya refugees that same day at the archbishop’s residence in Dhaka, he added, made him feel ashamed. “I felt ashamed of myself, for the whole world!”

When asked “why such attention” for the small Catholic community in Bangladesh when he elevated their archbishop in Dhaka to the rank of cardinal, Pope Francis said that in naming cardinals, he looks to the “small churches, those that grow in the peripheries, at the edges.”

It’s not meant to give them “consolation,” but is “to launch a clear message: the small churches that grow in the periphery and are without ancient Catholic traditions today must speak to the universal church, to the whole church. I clearly feel that they have something to teach us.”

NEXT: Bishops condemn selling of Nigerians into slavery in Libya