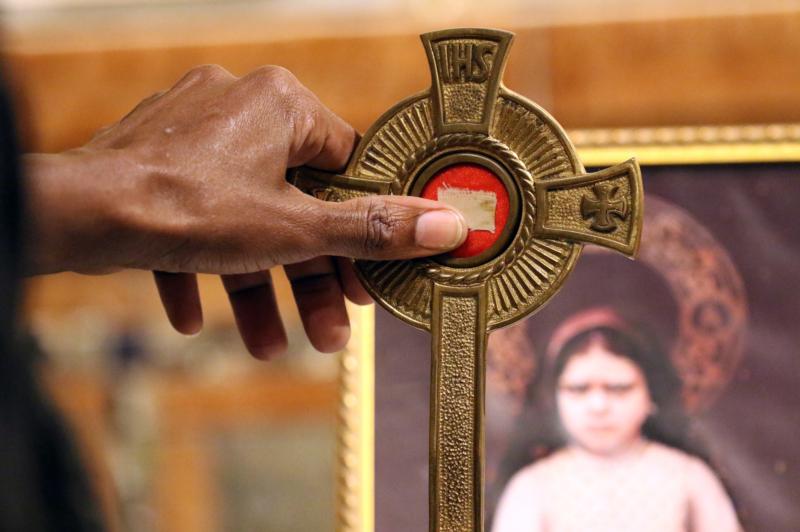 A woman venerates a relic of St. Jacinta Marto prior to a vigil Mass Oct. 12 celebrated in honor of Our Lady of Fatima at St. Vincent Ferrer Church in New York City. St. Jacinta was one of the three children to whom Mary appeared in Fatima, Portugal, in 1917. Oct. 13 marked the 100th anniversary of the sixth and final Marian apparition in Fatima. (CNS photo/Gregory A. Shemitz)

VATICAN CITY (CNS) — Only relics that have been certified as authentic can be exposed for veneration by the faithful, said a new Vatican instruction.

Published Dec. 16 in Italian by the Congregation for Saints’ Causes, the instruction clarifies and details the canonical procedures to be followed by local bishops in an effort to verify the authenticity of relics and the mortal remains of saints and blesseds, as well as better guarantee a relic’s preservation, approve and track its movements, and promote its veneration.

The instruction replaces the appendix, “Canonical Recognition of the Mortal Remains of the Servant of God,” included with “Sanctorum Mater,” the congregation’s “Instruction for Conducting Diocesan or Eparchal Inquiries in the Causes of Saints,” released in 2007.

The new instruction outlined the specific procedures and personnel necessary for the canonical recognition of the authenticity of the relics or remains of a saint or anyone on the path to sainthood. It also specified that any action taken regarding the relics or remains must also conform with local government laws and have the consent of the saints’ congregation and the person recognized as the deceased’s “heir.”

In the case of an upcoming canonization or beatification, some small pieces or fragments already separated from the body can be removed and later given to the postulator or vice postulator for placement in a properly sealed reliquary, the instruction said.

But “the dismemberment of the body is not allowed” unless the bishop has obtained permission from the saints’ congregation, it said.

The sale or trade of relics remains “absolutely prohibited” as well as exposing them in “profane” or unauthorized locations, it said.

Some of the rules also include:

— Rigorously avoiding any sign of veneration for the remains of a servant of God or venerable before beatification.

— Obtaining written consent from the congregation and every bishop or proprietor that would be involved in the moving of, in transferring the ownership of, or in the pilgrimage of any relics and mortal remains of the saints and blesseds.

— Getting the consent of the saints’ congregation, the relevant patriarch and his permanent synod for the alienation or transfer of ownership of relics and precious icons of the Eastern churches.

NEXT: Pope puts founder of Rosary Crusade one step closer toward sainthood