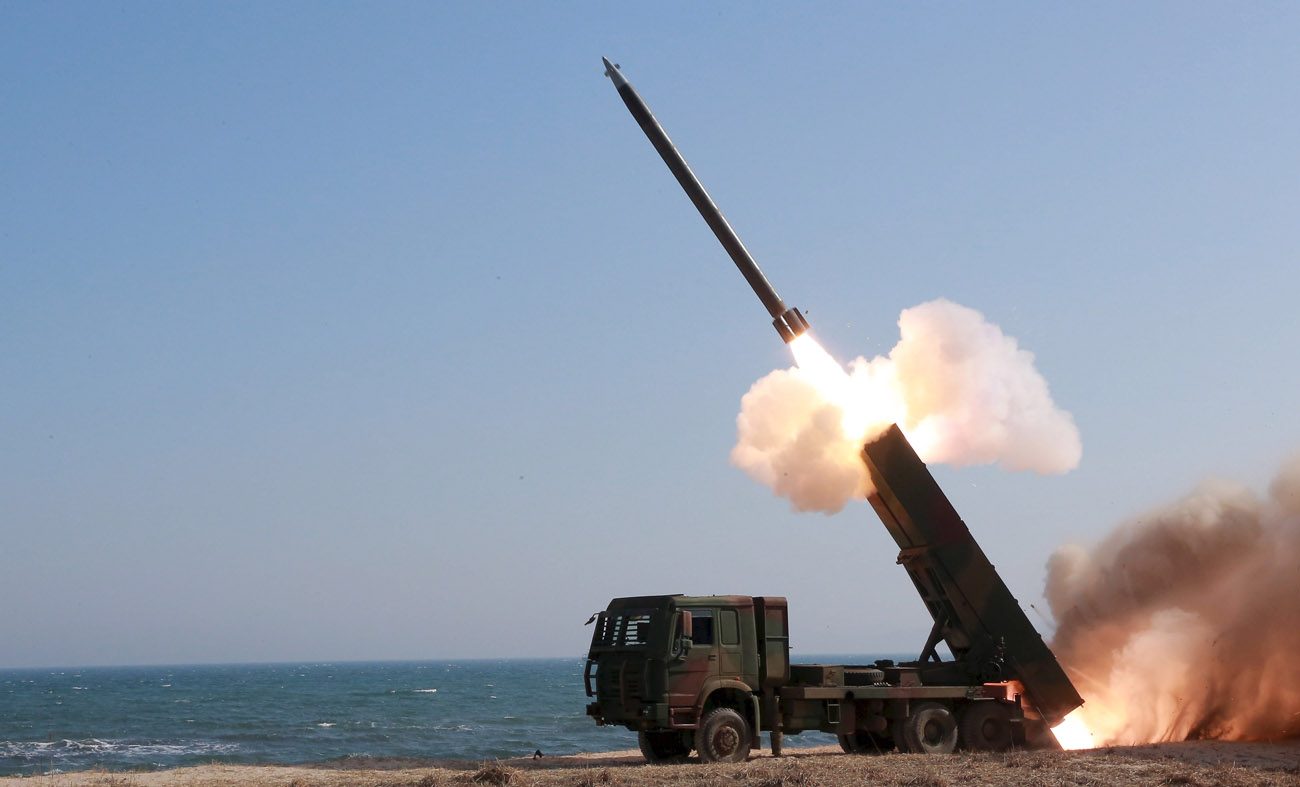 A rocket is launched during a demonstration of a new large-caliber multiple rocket launching system in this undated file photo released by North Korea's Korean Central News Agency. (CNS photo/KCNA via Reuters)

WASHINGTON (CNS) — The ratcheting up of North Korea’s missile testing, and fears that it also is advancing in its quest to launch a nuclear weapon, has gotten the attention of virtually everyone within range of any North Korean-fired missile and leaders worldwide, including Pope Francis.

On the Dec. 2 flight from Bangladesh to Rome following his visit to Myanmar and Bangladesh, Pope Francis said St. John Paul II’s U.N. address from 1982 may be out of date.

St. John Paul had told the U.N. general assembly that deterrence could be judged morally acceptable as a way of ridding the world of nuclear weapons. At that time, the Cold War still raged, and deterrence was the norm.

“What has changed?” Pope Francis asked on the flight. “The irrationality has changed.”

The pope added his position is open to debate, but “I’m convinced that we are at the limit of licitly having and using nuclear weapons.”

At a Vatican conference in early November, Pope Francis said today with nuclear weapons, “the threat of their use as well as their very possession is to be firmly condemned.” He later explained to journalists that the increased sophistication of the weapons means “you risk the destruction of humanity, or a great part of humanity.”

Pope Francis urged religious leaders from South Korea to dedicate their words and actions to building peace and harmony.

“We are called to be heralds of peace, proclaiming and embodying a nonviolent style, a style of peace, with words clearly different from the narrative of fear and with gestures opposed to the rhetoric of hatred,” the pope said Sept. 2, the day before North Korea detonated what it said was a hydrogen bomb. By mid-December, North Korea had conducted six nuclear tests underground. Since February, it has fired off 23 missiles.

The pope told South Korean faith leaders that progress on the path to peace is made “not just by raising our voices but by rolling up our sleeves, to sow the hope of a future in which humanity becomes more human, a future which heeds the cry of so many who reject war and implore greater harmony between individuals and communities, between peoples and states.”

Pope Francis’ view has been echoed by others at the Vatican.

Continuing education by the church about the danger nuclear weapons pose is needed if the goal of total nuclear disarmament is to be achieved, Archbishop Silvano Tomasi, an official in the Vatican’s Dicastery for Promoting Integral Human Development, said Sept. 26 at Georgetown University.

Average people, including Catholics in the pew, hold the key to eventual disarmament, Archbishop Tomasi added. He said it is vital for people to learn about the issues surrounding nuclear weapons and press their governments about the threats to security such armaments pose and how their possession and upkeep redirects billions of dollars in funding away from human needs.

The Vatican City-State was one of 50 nations to sign the U.N. Treaty on the Prohibition of Nuclear Weapons, but one of only three to ratify it. Fifty countries must both sign and ratify it before the treaty would take effect 90 days later.

The treaty bans efforts to develop, produce, test, manufacture, acquire, possess or stockpile nuclear weapons or other nuclear explosive devices. None of the signatories were countries already in possession of nuclear weapons, including the United States.

North Korea is listed in President Donald Trump’s travel ban restricting entry into the U.S. by nationals from some countries. It is the only non-majority-Muslim country in the ban that now would affect eight countries. The ban, now in its third iteration, was given the go-ahead to be implemented in early December by the Supreme Court, at least on a temporary basis, while appellate courts in Hawaii and Maryland hear arguments from those backing and opposing the ban.

Global Zero, the organization that maintains the “doomsday clock,” had it set in 2016 at three minutes to midnight. It was reset in 2017 to two minutes and thirty seconds before midnight — and that was Jan. 26, well before North Korea’s new missile tests and the war of words between Trump and North Korean leader Kim Jong Un.

More than 750 Catholics called on Trump and Congress in October to seek diplomatic solutions to defuse rising tensions between the United States and North Korea and to assure that the U.S. remains a party to the Iran nuclear deal.

The leaders of dozens of religious congregations, officials at Catholic organizations and individual parishioners said they were concerned by Trump’s threats to “totally destroy” North Korea and to withdraw the U.S. from the Iran accord because both actions would bring the world “to the brink of nuclear catastrophe.” Trump ultimately refused to recertify Iran’s compliance with the deal, but neither did he scuttle the agreement.

Dialogue is the way to reduce tensions in the “hair-trigger” nuclear crisis between the United States and North Korea, said Chuck Hagel, a former U.S. defense secretary, Republican senator from Nebraska and Vietnam War veteran during a Nov. 2 Georgetown University forum on the issue.

“If you keep it at a confrontational level, United States vs. North Korea, and keep the rhetoric hot, you know where that’s going to go,” Hagel said. “If you bring in others, that insulates the heat,” he added. “The most successful agreements that have been reached since World war II are multiparty agreements.” Hagel called for “diplomacy at the most basic level, of coming down and saying, ‘What do you want?’

“The threat of violence from the North Korean regime cannot be ignored, but the prospect of catastrophic death and destruction from military action must prompt the United States to work with others in the international community for a diplomatic solution based on dialogue,” Bishop Oscar Cantu of Las Cruces, New Mexico, said in an October letter to Secretary of State Rex Tillerson.

“The agreement with Iran is critical for progress in nuclear nonproliferation and has implications for the deeply troubling prospect of a nuclear-armed North Korea,” Bishop Cantu wrote.

On Dec. 12, Tillerson issued a statement saying the U.S. was willing to hold talks with North Korea “without preconditions,” but a day later Trump’s press secretary said the White House’s position is that talks would be pointless if North Korea continues to threaten other countries.

In the midst of it all, the 2017 Nobel Peace Prize was awarded to the International Campaign to Abolish Nuclear Weapons. It was commended for its work in drawing attention “to the catastrophic humanitarian consequences of any use of nuclear weapons,” the Nobel committee said.

“It is the firm conviction of the Norwegian Nobel committee that ICAN, more than anyone else, has in the past year given the efforts to achieve a world without nuclear weapons a new direction and new vigor,” it said.

PREVIOUS: Pope wants church to be voice of the poor in Amazon