Raffish designer gets his comeuppance in ‘Phantom Thread’ 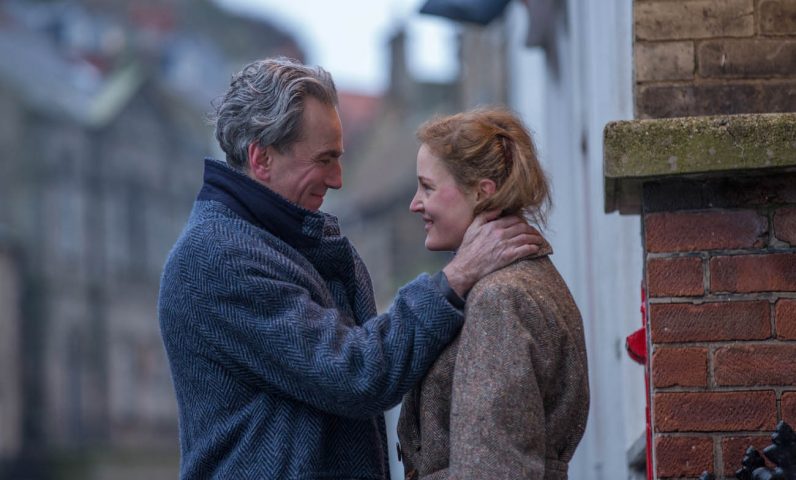 Daniel Day-Lewis and Vicky Krieps star in a scene from the movie”Phantom Thread.” (CNS photo/Focus Features)

NEW YORK (CNS) — All rustling silk, organza, lace and tulle in the first half and a bizarre portrayal of marriage in the second half, “Phantom Thread” (Focus) is a bumpy trip through high fashion and passive-aggressive sniping in 1950s London.

Director-writer Paul Thomas Anderson may be trying to make a statement about necessary sacrifices to make the man-woman dynamic function property, but despite the lush, appealing visuals, he’s come up with an ugly denouement straight out of a cheap horror film.

His sister, Cyril (Leslie Manville), runs the business, leaving the temperamental Woodcock free to sketch designs and pursue romances — at least that’s what obliquely implied — with a string of live-in women. He uses the devoted, priggish Cyril to cast them aside when he grows tired of their emotional neediness.

One day on a country drive and a stop at a hotel restaurant, Woodcock encounters waitress Alma (Vicky Krieps), a slim young expatriate with a nonspecific European accent. After a bit of flirting, he knows he’s found himself his next muse and model.

He accepts affection, but only on his own terms. His way of showing it, such as he’s capable, consists of doing fittings so his designs will be realized. It’s not a balanced partnership by any means.

Woodcock has a devoted staff of seamstresses and no shortage of clients attending his fashion shows, but muses are difficult to fit into his existence. Affection and sex don’t mean as much to him as the power he exerts on others.

He shortly finds Alma annoying, particularly for her habit of making too much noise at breakfast, and is perpetually on some sort of slow burn over slights real and imagined. Alma, who accepts this soul-deadening arrangement and eventually marries Woodcock, nonetheless develops a long-term plan to keep him for herself in spite of all the snippy abuse.

This is where the story takes a disturbing turn. Alma, who likes to cook and prepare drinks, figures out a way to add poisonous mushrooms to her cuisine. Not enough to kill, but enough to inflict severe illness, which creates Woodcock’s instant dependency.

Does anyone get suspicious in the least? Nope. There’s an ineffectual doctor, but anyone waiting for a police inspector to turn up is waiting in vain.

Anderson suggests that the solution to a toxic relationship is real toxins. It’s a problematic, immoral turn without any indication of justice, restricting the film’s audience to adults capable of mature discernment. There are no stitches in time here.

NEXT: Complex, conflicted ‘I, Tonya’ has no moral uplift but is fascinating