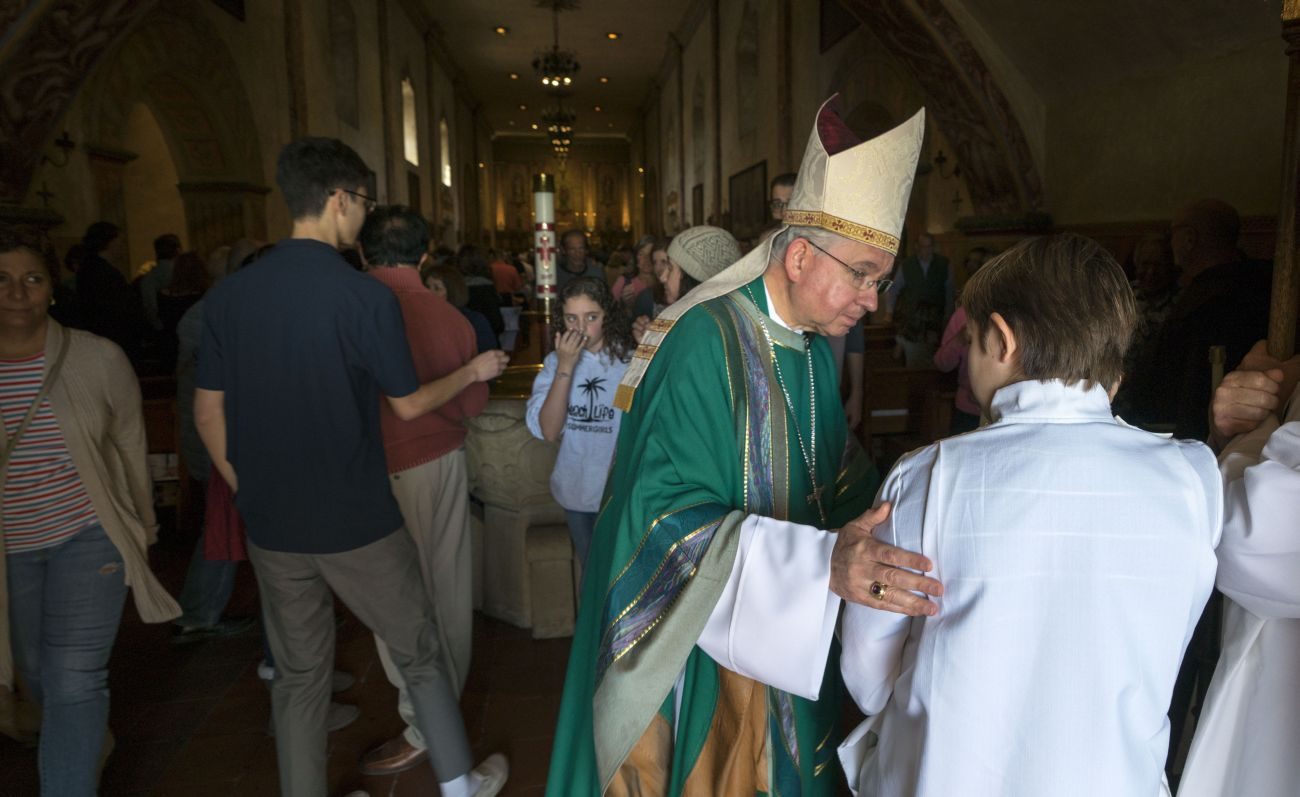 Archbishop Jose H. Gomez of Los Angeles greets an altar server after celebrating Mass Jan. 14 at Santa Barbara Mission in California. The archbishop traveled by helicopter to the mission for the Mass and to bring the "consolation of God's love" to victims of devastating mudslides. (CNS photo/John Rueda, Angelus News)

SANTA BARBARA, Calif. (CNS) — Amid tragedies such as the devastating mudslides in Southern California and the horrific wildfires that preceded them, “we want to know why” they happen, Los Angeles Archbishop Jose H. Gomez said Jan. 14.

“It is not easy. One of the hardest things in the world is to keep believing in God’s love when we see tragedy,” he said in his homily during a Mass with victims of the mudslides at Santa Barbara Mission.

“Why does God allow mudslides and fires and earthquakes and hurricanes and wars and famines? I do not know. Nobody knows!” he said. “But we all know one thing: God did not make us to see us get hurt. He made us out of love. We are his sons and daughters and he wants only the best for every one of his children. Every person! No exceptions!”

He added, “The only thing for certain in our lives is that God loves us. And how do we know that? One word: Jesus.”

Early Jan. 9, the mudslides hit Montecito, a coastal enclave of about 9,000 people northwest of Los Angeles, leaving at least 20 people dead. Three people were still missing as of Jan. 17.

Heavy rains had triggered the slides in an area ravaged a month before by wildfires. The Associated Press described a “torrent of mud, trees and boulders that flowed down a fire-scarred mountain and slammed” into Montecito in Santa Barbara County. About 100 homes were destroyed and hundreds of others were severely damaged.

One of the fatalities was Roy Rohter, the founder of St. Augustine Academy, a Catholic school in Ventura. The mudslides swept him and his wife, Theresa, from their home in Montecito. Theresa survived.

The news website of the Los Angeles Archdiocese, Angelus, reported that Archbishop Gomez traveled by helicopter to Santa Barbara Mission to celebrate Mass.

“It is a special blessing for me to be here,” he told the congregation in his homily. “I am grateful for this chance to be close to you and hopefully, to bring you the consolation of God’s love and his tenderness — in this time when so many of our brothers and sisters are in pain.”

He recognized in particular the parishioners from Our Lady of Mount Carmel in Montecito in attendance and said that everyone at the Mass was “especially praying for the ones who died this past week and for all the victims and their families.”

“We gather this morning in this Eucharist to worship God and to talk to him, to pray and to tell him our frustrations, our sorrows. We come especially today — to look for answers to our questions,” Archbishop Gomez said.

He described an Angelus story about a couple in their 70s. “They were evacuated during the Thomas Fire (one of the wildfires) and it was only days later that they were able to return,” he explained. “And the place where their house was — there is nothing left. Just ashes and dirt.

“These are good Catholic people, good neighbors. You know these stories,” he continued. “There are hundreds more like them. You are living these stories.”

Such stories “tell us that life is precious, but it is also uncertain and fragile,” he said. “These stories tell us that we should live for God every day and cherish our time — and we should not anything in our lives for granted.”

In coming to Jesus at the Mass to look “for answers,” he said, the Lord “does not give us the answers” but tells us instead “that he is the answer.”

NEXT: President Trump to address March for Life crowd live via satellite