Bishop Bambera: Christians can be models of unity in divisive time 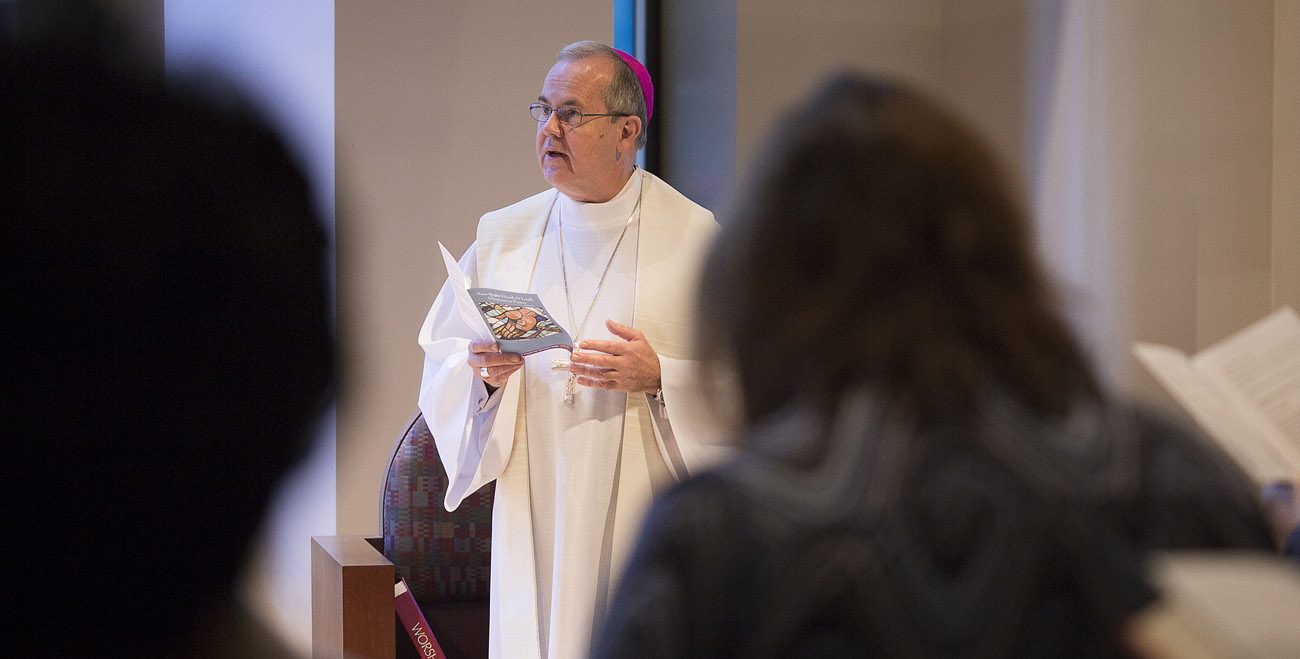 Bishop Joseph C. Bambera of Scranton, Pa., who is chairman of the U.S. bishops' Committee for Ecumenical and Interreligious Affairs, celebrates Mass Jan. 18 in the chapel at the U.S. Conference of Catholic Bishops' headquarters in Washington. The Mass was said on the first day of the annual Week of Prayer for Christian Unity. (CNS photo/Tyler Orsburn)

WASHINGTON (CNS) — Christians of different faith traditions gathering to pray, to work together for a better world and to express love for others despite differences can provide a powerful witness and example in a divisive world, said a U.S. bishop who specializes in relations between Christians and interfaith groups.

Bishop Joseph C. Bambera, chairman of the U.S. Conference of Catholic Bishops’ Committee on Ecumenical and Interreligious Affairs, said during a Jan. 18 interview with Catholic News Service that unity among all people is “at the heart of the mission of the church.” He attended various events in Washington in mid-January to put actions behind the intentions of the Week of Prayer for Christian Unity, an international Christian ecumenical observance.

Jesus’ prayer was that “all might be one,” as the Gospel tells us, said Bishop Bambera, head of the Diocese of Scranton, Pennsylvania. “He doesn’t simply do that to fill a void in a conversation.”

“As leaders in the church, and our people, (we) as members of religious traditions, need to profess, proclaim and live a spirit of unity,” he said. “We have to give witness to what we say is so wrong when we see hatred, when Christians and Muslims are being slaughtered simply for what they believe.

“We need to give a voice when we see people being turned away at our doors when all they are doing is seeking a better life, and we need to give voice and example and witness to our faith, when we see the poorest among us.”

Christian unity doesn’t mean uniformity, said Bishop Bambera, but it means praying “as brothers and sisters from different Christian traditions together, to let our voices blend together in harmony and then we are called to embrace whatever we can to give witness to our unity,” and “not just to be an empty voice but to give a life to what we pray (for), to serve our brothers and sisters. ”

That may mean bringing unified prayer to action by working together in shelters to help the poor, homeless and hungry, advocating together for common social causes, and a variety of other activities to work for the common good, Bishop Bambera said.

“There will still be divisions among our churches after this week of prayer,” he said. “But wouldn’t it be a wonderful thing if we could join in for basic beliefs that go across denominations and even faith traditions, proclaiming respect for human life?

“If we could work in harmony to put in place policies for immigration that are just so much more welcoming and nurturing to our people and to our land, to those who come to us looking for a safe haven to live? Wouldn’t it be wonderful if we could join our voices to bring an end to racism and hatred?” he continued. “Wouldn’t it be wonderful if we could work together in a much much more harmonious way to feed the poor and to care for them?”

To kick off the week, celebrated Jan. 18-25, Bishop Bambera participated Jan. 17 in an “Evening Prayer Service for Christian Unity” at Washington’s Franciscan Monastery of the Holy Land. It included a joint ceremony with James Winkler, president and general secretary of the National Council of Churches, which represents congregations from Protestant, Anglican, Orthodox, evangelical, historic African-American and Living Peace traditions.

Winkler mentioned how across the years, faith leaders have faced down evil, including war and Nazism, and joined together to support the country’s civil rights movement. More recently, faith leaders have expressed concerns for church leaders and their members in Cuba, Korea and Palestine so that American Christians will mobilize and “change our nation’s policies away from cruelty and confrontation and toward justice and peace,” Winkler said.

He added that later this year many people of faith will gather in Washington for a march to end racism, which will include many Catholic groups, such as the Franciscan Action Network and in which members of the Catholic bishops’ conference also have expressed interest in participating, he said.

“If we can have black churches and white churches, Jews and gentiles, Catholics and Protestants standing on the National Mall in an effort to end racism, we’ve begun to move forward,” Winkler said. “The ecumenical movement embodied in the Week of Prayer for Christian Unity has helped us get to this point and I thank God for that.”

Father James Gardiner, of the Franciscan Friars of the Atonement, who organized the evening prayer service in Washington, said although the Week of Prayer for Christian Unity doesn’t draw the large numbers it did in the past, “it echoes the high priestly prayer of Jesus at the Last Supper, ‘that all may be one.'”