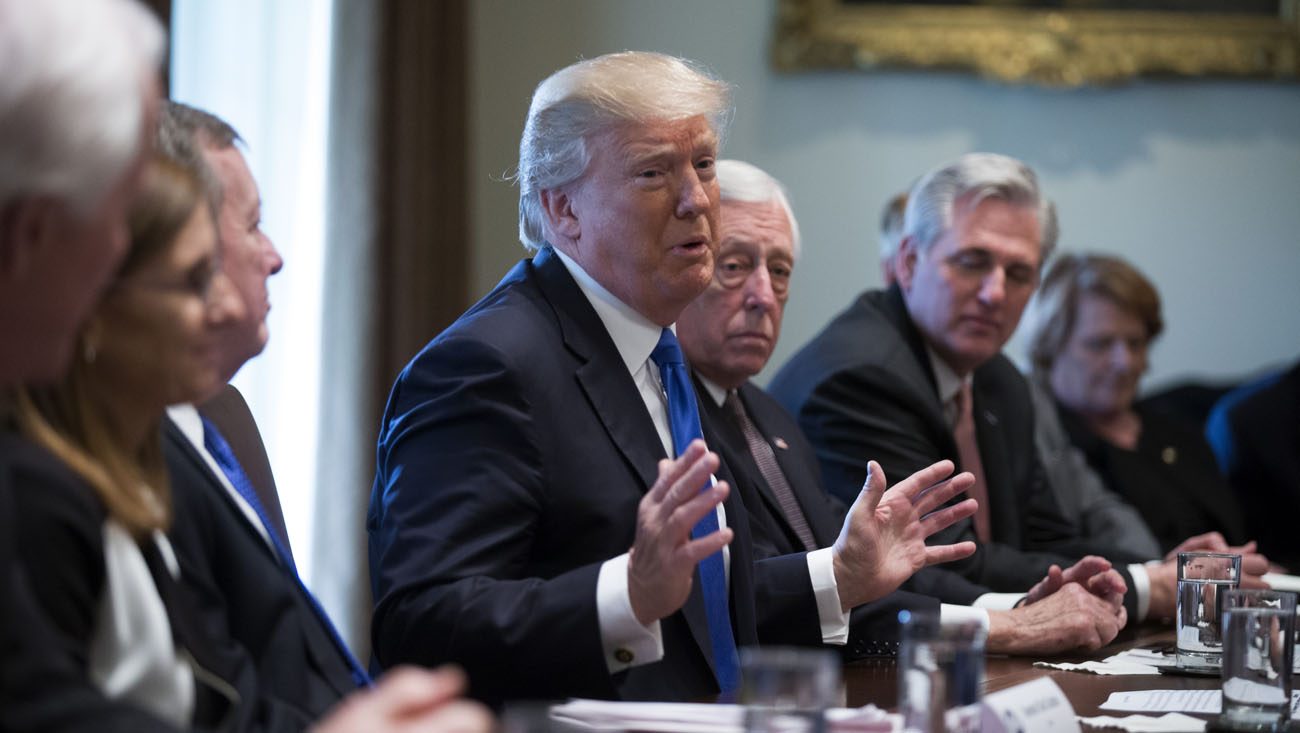 U.S. President Donald Trump gestures during a meeting on immigration with a bipartisan group of House and Senate members at the White House Jan. 9. The U.S. Catholic bishops "are encouraged by the consensus" that emerged from the meeting that a legislative solution for the Deferred Action for Childhood Arrivals program is "urgently needed," said the chairman of the bishops' Committee on Migration. (CNS photo/Shawn Thew, EPA)

WASHINGTON (CNS) — The U.S. Catholic bishops “are encouraged by the consensus” that emerged from a White House meeting that a legislative solution for DACA is “urgently needed,” said the chairman of the bishops’ Committee on Migration.

The bishops also “are pleased to see the mutual understanding that ensuring protection for these young people should be the first step in the systematic reform of our outdated immigration laws,” said Bishop Joe S. Vasquez of Austin, Texas, referring to those currently protected by the Deferred Action for Childhood Arrivals program.

The committee chairman said the Catholic leaders are ready to work with Congress and the White House to find a solution, but he also cautioned against including “unrelated, unnecessary or controversial elements of immigration policy” in a fix for DACA.

Bishop Vasquez made the comments in a statement released late Jan. 10 by the U.S. Conference of Catholic Bishops.

President Donald Trump and a bipartisan group from Congress met Jan. 9 at the White House to discuss a measure to keep DACA and include Trump’s demands for a border wall and other security measures.

“As a nation, we have a moral and humanitarian obligation to ‘Dreamers,'” Bishop Vasquez said. “These young people have steadfastly worked to improve themselves and our country and attempted in good faith to comply with the law as it stood. Their futures hang in the balance.”

In September, Trump announced that he would end DACA, which President Barack Obama created by executive order in 2012. At the same time, Trump called on Congress to come up with a legislative solution to keep the program in place.

“For years, these young people have been living in and enriching the United States in many ways,” Bishop Vasquez said in his statement. “They are contributors to our economy, veterans of our military, academic standouts in our universities, and leaders in our parishes and communities. They and their families deserve certainty, compassion, generosity and justice.”

He said the U.S. bishops “believe in measures that improve the security of our nation. Our teaching acknowledges and respects the right of sovereign nations to control their borders.”

“Such measures should be financially sound, effective and should not harm the vulnerable,” the bishop added.

“However, we caution against introducing unrelated, unnecessary, or controversial elements of immigration policy — especially those that jeopardize the sanctity of families or unaccompanied children — into the bipartisan search for a just and humane solution for the ‘Dreamers,'” he said.

Bishop Vasquez said the bishops “stand ready to work” with Trump and Congress “in the coming days to help fashion a just solution that meets their needs, ensures our nation’s safety and security, and sets the stage for the larger debate on immigration reform that is so urgently and desperately needed.”

The day of the White House meeting, a U.S. District Court judge in San Francisco temporarily blocked Trump’s decision to rescind DACA, saying the U.S. government must start accepting renewal applications again from current beneficiaries of the program. The ruling, which is certain to be appealed, also said the government does not have to accept applications from those not currently covered by DACA.