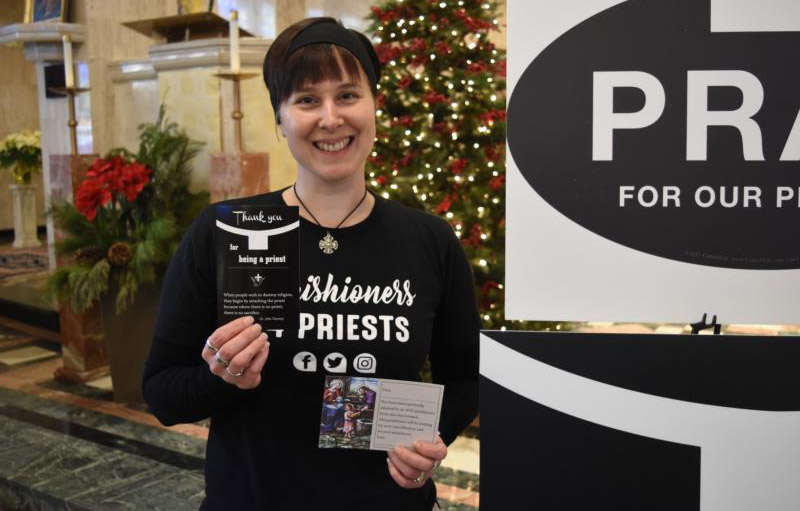 Mindy DeWitt, a parishioner of Divine Child Parish in Dearborn, Mich., poses Jan. 4 with some of the cards and posters she created for “Parishioners for Priests,” a grass-roots movement that seeks to assign every priest in the Archdiocese of Detroit a dedicated anonymous prayer warrior. (CNS photo/Dan Meloy, The Michigan Catholic)

That’s the spirit behind Parishioners for Priests, a grass-roots movement that encourages Catholics to give local priests the one thing they need most: prayers.

The movement began on Palm Sunday 2017 and since has grown to 559 followers on Facebook.

Each day, one of the active priests of the Archdiocese of Detroit is selected as the “priest of the day,” and the followers of the page take time to say a prayer for that priest.

The simple but effective way to pray from priests was started by Mindy DeWitt, a parishioner at the Church of the Divine Child in Dearborn.

“I felt priests really need to be prayed for,” DeWitt told The Michigan Catholic, the archdiocesan newspaper. “I saw a Vatican document ‘Eucharistic Adoration for the Sanctification of Priests and Spiritual Maternity,’ on the (U.S. Conference of Catholic Bishops) website. It was about having Holy Hours for praying for priests and spiritually adopting a priest.

“I read the document, emailed it to Father John Kopson (associate pastor of Divine Child), and asked if he wanted to talk about it.”

Those discussions spurred DeWitt to action.

In addition to praying for the “priest of the day,” those interested can spiritually adopt a priest for whom they’ll be responsible for praying. DeWitt uses an app on her iPad that randomly selects the name of a priest in the Detroit Archdiocese who hasn’t been adopted yet.

The parishioner then receives a confirmation email and a card with the name of the archdiocesan priest on it, instructing the person to pray daily for the priest’s sanctification.

To date, 105 priests have been adopted, but more than 200 active priests in the archdiocese await adoption.

Parishioners can’t select which priest they are going to adopt, and the adoptions are done anonymously — a system DeWitt thinks works well.

“I think it’s better anonymous; the priest doesn’t feel an obligation to do anything in return,” DeWitt said. “I have a P.O. Box address. One time a priest adopted sent a thank-you card to the P.O. Box, so I sent the card to the person who had adopted them. Then I sent a letter to the priest saying the message was passed along.”

When a person adopts a priest, they have the option to send him a “spiritual bouquet,” a postcard the parishioner can fill out detailing what they are doing for the priest.

“There are different levels of participation,” DeWitt said. “We have a prayer card for people who don’t have a lot of time, but can say a prayer for all the priests or the priest of the day. We just encourage everyone to pray what they can.”

Each of the cards, and the spiritual bouquet, include a quote from St. John Vianney, patron saint of parish priests: “When people wish to destroy religion, they begin by attacking the priest because where there is no priest, there is no sacrifice.”

“Without our priests, we don’t have a church; it’s that simple,” DeWitt said. “We hear all the time, ‘Pray for priests.’ But sometimes that’s too general or impersonal. When people have a specific priest, or a priest for a day, that makes it more personal, something people can better comprehend who they are praying for.”

DeWitt hopes that soon enough, every priest in the archdiocese will be adopted, and every parish will have some sort of Holy Hour dedicated to praying for priests.

“Judging by the comments I receive on Facebook and through email, people really appreciate their priests and want to have a public place to say that,” DeWitt said. “At Divine Child, we have a monthly Holy Hour to pray for priests, and I’m hoping more parishes will start having more dedicated times to do so.”