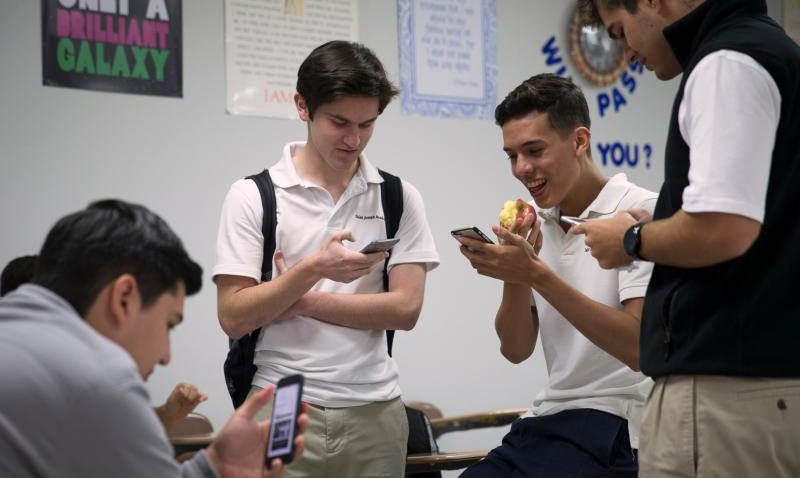 Students at St. Joseph Academy in Brownsville, Texas, check their smartphones during lunch in 2016. Dominican Sister Patricia Daly, retired executive director of the Tri-State Coalition for Responsible Investment, agreed to advise the investors as they press Apple to make software updates to its highly popular iPhone and to study the mental health impact of smartphone overuse. (CNS photo/Tyler Orsburn)

WASHINGTON (CNS) — As two major shareholders of Apple Inc. urge the company to take steps to help parents control and limit smartphone use by their children, a veteran of the corporate social responsibility movement is at their side.

Dominican Sister Patricia Daly, retired executive director of the Tri-State Coalition for Responsible Investment, agreed to advise the investors as they press Apple to make software updates to its highly popular iPhone and to study the mental health impact of smartphone overuse.

“It’s wonderful to see investment firms do this,” Sister Daly told Catholic News Service, regarding the effort led by Jana Partners LLC and the California State Teachers’ Retirement System, known as CalSTRS, which own about $2 billion in Apple stock.

Sister Daly has spent more than 40 years partnering with the Interfaith Center on Corporate Responsibility in challenging corporate officials to better respond to shareholder concerns about the environment, worker and human rights, equality for women and child labor.

Jana and CalSTRS are acting in response to growing evidence that long hours of smartphone use by children and teenagers have negative health effects on sleep, nutrition, attention and learning. Studies have revealed higher incidences of depression and obesity among young people who are on their phones for more than an hour or two a day.

A 2016 Common Sense Media study reported that 50 percent of teenagers said they were “addicted” to their smartphones, being connected for hours at a time. The average American teenager who uses a smartphone spends more than 4.5 hours a day on their device texting and talking.

In an excerpt published in the September 2017 issue of The Atlantic, Twenge contended that the arrival of the smartphone “radically changed every aspect of teenagers’ lives, from the nature of their social interactions to their mental health.”

The changes affect teens of all income levels, every ethnic background and in cities, suburbs and small towns, she wrote, explaining that “where there are cell towers, there are teens living their lives on their smartphone.”

The growing awareness of negative health impacts from hours of phone use by teens prompted Jana and CalSTRS to reach out to Apple. In a Jan. 6 letter to the tech company’s board of directors, the shareholders said they believed “there is a clear need for Apple to offer parents more choices and tools to help then ensure that young consumers are using your products in an optimal manner.”

By responding now, the letter said, Apple would be seen as being in the forefront in addressing the negative results of excessive smartphone use, enhancing “long-term value for all shareholders.”

What’s not directly said in the letter is that consumer backlash may arise if parents realize the company knew about the negative effects of excessive phone usage and did nothing about it.

The investors hold a small share of the $900 billion tech giant, but they have seen smaller investors have an impact on Apple’s corporate practices.

Today, the iPhone’s future looks bright. The most recent semi-annual consumer survey by the investment bank PiperJaffray released in October revealed that 82 percent of teenagers said they expect their next phone to be an iPhone. Of the 6,100 teens interviewed, 78 percent said they already own an iPhone. Their average age was 15.9 years.

In addition to Sister Daly, the advisers to Jana and CalSTRS are Robert G. Eccles, an expert on sustainable investing, and Sting and his wife, Trudie Styler. Sister Daly told CNS that she was eager to offer her expertise.

Most recently, she was among the most vocal of shareholder activists who doggedly worked to get Exxon Mobil Corp. to disclose its role in failing to address climate change despite years of internal correspondence that acknowledged the phenomenon.

“To be honest, it says more about the ICCR community that they would go to someone from ICCR. We’ve been at this and learned what works and doesn’t work … for nearly 50 years,” Sister Daly said.

“We are really seeing that this planet and people are not going to survive if profit is the bottom line,” she added. “We’ve got to be far more thoughtful about what is the impact of these investments. These investments have to be sustainable in themselves.”