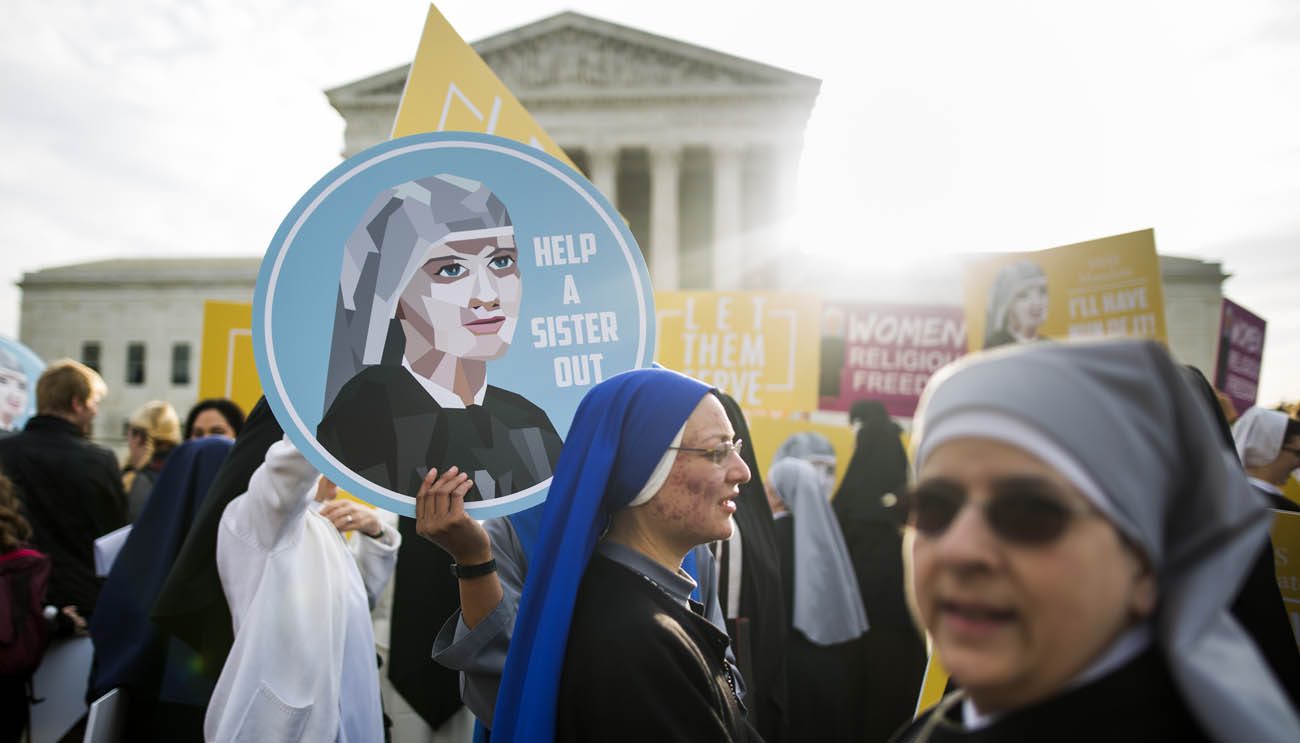 NOTRE DAME Ind. (CNS) — Some University of Notre Dame students, faculty and alumni are voicing strong public criticism over the university administration’s decision to continue employee insurance coverage for sterilizations, contraceptives and abortifacients after a federal mandate to do so was amended late last year.

On Oct. 6, President Donald Trump expanded the religious exemption for an Obama-era Health and Human Services directive requiring such coverage. The next day, the Notre Dame president, Holy Cross Father John Jenkins, joined other Catholic leaders in praising that action, and an Oct. 27 university email to employees stated that the previously mandated coverage would end Dec. 31.

A small campus protest ensued over that announcement, organized by the Notre Dame Graduate Workers Collective, an independent group of graduate students.

That same organization gathered about 500 signatures on a petition stating: “We demand that the officials who run Notre Dame’s affairs re-examine their consciences and respect our freedom to make reproductive, family, and religious choices without economic coercion.”

Among the signatories were students, “friends,” alumni, staff, relatives of employees and about 70 Notre Dame faculty. (Notre Dame has a student enrollment of about 12,500 and is the largest employer in St. Joseph County.)

The American Civil Liberties Union of Notre Dame and the Notre Dame Women’s Legal Forum executive board, both law student organizations, also objected in a letter published in The Observer, the student newspaper. “In light of the many religious differences that exist here,” they wrote, “we do not believe that students and employees should have limitations placed on their abilities to make health care decisions.”

It is not clear how much such reaction influenced the Notre Dame administration, but the university reversed course. It informed employees Nov. 7 that third-party health plan administrator Meritain Health and prescription benefit manager OptumRx would continue to provide those items free of charge. Students also were informed that their coverage would continue.

A statement from Paul Browne, Notre Dame vice president for public affairs and communications, said the reversal came after the university learned the insurers would continue the coverage at no cost, so the university opted not to “interfere.”

Some analysts believe Notre Dame simply chose not to claim the religious exemption that it previously had pursued in University of Notre Dame v. Burwell, a 2013 lawsuit against the U.S. Department of Health and Human Services, which issued the mandate that required the insurance coverage. (“Burwell” is then-HHS Secretary Sylvia Mathews Burwell.)

In that lawsuit, the university contended that the federal directive to provide insurance for morally objectionable items would harm the university’s Catholic character.

Dissatisfied by the lack of a substantial explanation from the university administration about its about-face on the coverage, some faculty, students and alumni wrote to university leaders, asking them to reverse their decision to leave in place the insurance for immoral items and procedures. Some of those letters have been made public.

The group’s board explained that Father Jenkins had met with them and other concerned faculty and staff in December and had listened to them “respectfully,” but the policy had not changed, so the board decided to publish the letter in the “Viewpoint” section of the Jan. 18 issue of The Observer.

“With the March for Life approaching,” it said, “we, the executive board of the Notre Dame Chapter of University Faculty for Life (UFL), want to make clear that there are many Notre Dame faculty, staff and students who oppose these policies that facilitate the destruction of human life, and who are committed to the holistic teachings of the church on the sanctity of all human life.”

The letter stated that “university communications have left much unsaid and caused manifest confusion.” It noted the university testified in court that “Notre Dame believes its participation in the U.S. government mandate would cause scandal and therefore Notre Dame cannot comply with the mandate consistent with its religious beliefs.”

The students wrote: “This reversal has left many dumbfounded — shocked that after a long and costly lawsuit in which Notre Dame asserted that it was against its Catholic values to play any part in providing contraceptives and abortifacients to employees and students, it would abruptly reverse course and willingly participate in such action.”

Among the Affleck-Graves affidavit statements the students cited was this: “It is Notre Dame’s sincerely held religious belief that it cannot become entangled with, or appear to facilitate, endorse, or accept, that which it believes to be contrary to Catholic faith.

“Notre Dame’s Catholic beliefs, therefore, prohibit it from paying for, facilitating access to, and/or becoming entangled in the provision of abortion-inducing products, contraception, sterilization or related counseling.”

A Dec. 16 letter was sent to Father Jenkins and signed by lawyers who are Notre Dame alumni. To date, it has garnered 71 signatures.

Referring to the Burwell suit, the lawyers warned that the university’s decision to retain the objectionable insurance coverage could appear to be “abuse by the university of the judicial process in its legal challenge to the Obamacare abortifacient/contraceptive mandate.”

The lawyers also cited the sworn testimony of Affleck-Graves, saying: “He described with considerable eloquence how the (HHS) mandate required actions contrary to the conscience of an authentically Catholic university (and) imposed a substantial burden on Notre Dame’s religious liberty.”

Notre Dame, they wrote, “is now doing voluntarily precisely what it said it could not do in good conscience and without giving scandal, particularly to its students.” And, they charged that “Notre Dame by all appearances took the time of the courts and the government with a pretend lawsuit.”

The lawyers urged Father Jenkins to provide an explanation that would “absolve the university from the charge of playing fast and loose with the courts or mitigate to some degree its blame,” if such an explanation exists. If there is no explanation, they wrote that the matter was serious enough to “demand action by the (Notre Dame) fellows or the board of trustees.”

“Remedial action should be taken, an accounting given to the Notre Dame community, and thoughtful consideration given to how amends might be made to the courts,” they said.

Browne, the university spokesman, told Catholic News Service that “Father Jenkins is currently reviewing Notre Dame policy on the issue and will have more to say on it soon.” He said the priest has been in discussion with, among others, Bishop Kevin C. Rhoades of Fort Wayne-South Bend.

Browne said the university originally sued HHS in 2011 because the mandate “violated the Religious Freedom Restoration Act and the First Amendment,” thus opening the door for further government interference in Catholic institutions.

“The successful resolution of our case,” Browne added, now allows the university “to fashion policies free from government interference that are based on Catholic principles, yet which seek to respect the plurality of religious traditions and convictions of over 5,000 employees that work at the university.”

In their Dec. 16 letter, the lawyers who are alumni said the “most obvious and effective” concrete measure to take “would be to exercise the right” the government gave the university to end the provision of abortifacients and contraceptives to students and employees, as you indicated initially you would do.

“This would rehabilitate the lawsuit insofar as is possible and would rescue Notre Dame and individuals in governance from being complicit with evil in the way so powerfully described by Dr. Affleck-Graves (in his 2013 affidavit),” they said. “As matters stand, it is because of Notre Dame that students and employees receive abortifacients and contraceptives.”

NEXT: DACA youth worry immigration deal for them will unleash fear for others