Since 2002, U.S. church has had strict protocols in place to address abuse 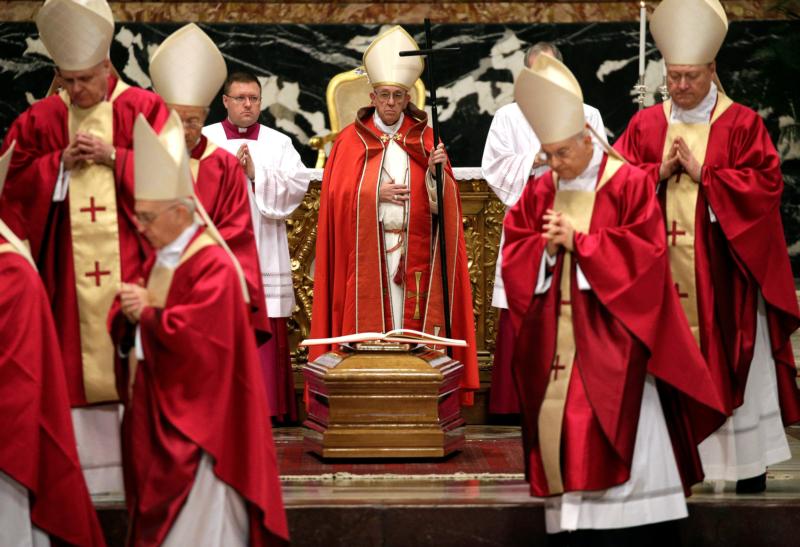 Pope Francis stands with his crosier as prelates pass the casket of Cardinal Bernard F. Law at the end of his funeral Mass Dec. 21 at the Altar of the Chair in St. Peter’s Basilica at the Vatican. Cardinal Law, who resigned as archbishop of Boston in 2002 when it became clear he had knowingly transferred priests accused of sexually abusing children, died Dec. 20 in Rome at age 86. (CNS photo/Max Rossi, Reuters)

WASHINGTON (CNS) — The death of Cardinal Bernard F. Law opened “a lot of old wounds,” causing “much pain and anger in those who have suffered so much already,” Boston Cardinal Sean P. O’Malley said Dec. 20, the day the Vatican announced Cardinal Law’s death.

The passing of the cardinal in Rome has put the spotlight once again on Boston as the epicenter of a clergy sex abuse scandal that has affected the whole U.S. church. The scandal erupted in 2002 and Cardinal Law resigned a year later amid allegations of mishandling clergy sex abuse cases.

Since 2002, however, the U.S. Catholic Church has taken many steps to bring abusers to justice, to prevent abuse and to heighten awareness of signs and symptoms of abuse.

“Looking at the culture of safety and well-being, the modus operandi has changed,” said Deacon Bernie Nojadera, executive director of the U.S. bishops’ Secretariat for Child and Youth Protection. “No one can just go in to a parish and say they want to work with children, young people. They have to be cleared, background-checked, and it has to be done repeatedly. This ongoing awareness and mindfulness is in place.”

In a Dec. 21 interview with Catholic News Service, the deacon said that he is always asked, “Are we going to completely eradicate abuse?”

“The answer to that is ‘no,’ but with what has been happening since 2002,” he said, “I can confidently say the church does indeed provide safe environments, does have an eye out and looks out for the vulnerable — our minors, our children — and has protocols in place.”

Those protocols were established by the bishops in 2002, when they met in Dallas that June for their spring assembly. They adopted the “Charter for the Protection of Children and Young People.”

At that meeting, the president of the U.S. Conference of Catholic Bishops, then-Illinois Bishop Wilton D. Gregory, who is now Atlanta’s archbishop, placed blame for the crisis on the bishops’ shoulders. He said it stemmed from “a profound loss of confidence by the faithful in our leadership as shepherds, because of our failures in addressing the crime of the sexual abuse of children and young people by priests and church personnel.”

The charter, revised in 2005 and 2011, established the lay-run National Review Board and the Office, now Secretariat, for Child and Youth Protection at the USCCB to assure that bishops comply with the policy decisions spelled out in the charter and the legally binding, Vatican-approved “Essential Norms” implementing it.

The norms provide U.S. dioceses and eparchies with “standards for protecting young people, reaching out to victims, assessing allegations against clergy, with the benefit of the advice of competent lay persons, and for anyone who would harm children.”

All U.S. dioceses and eparchies undergo independent audits of their current sexual abuse policies and practices and give detailed reports on complaints against their clergy since 1950.

“Since the 2002 inception of the charter approved by the bishops, every diocese and eparchy has safe-environment coordinators and victims assistance coordinators,” said Deacon Nojadera.

“But more important is that what’s happened since this crisis is the understanding, the culture, has changed,” Deacon Nojadera said. “Victims are listened to. Victims are believed.

“There is the understanding now, too, that instead of at all costs avoiding scandal, all transactions are out in the open, clear and transparent and additionally that is taking place on all levels — diocesan and national,” he said.

He added, “We have the blessing and grace and honor of accompanying survivor-victims on their journey toward healing and reconciliation. As a result of all of this, I believe the church is transformed, the church is healthier, holier now.”

According to Mary Gautier of the Center for Applied Research in the Apostolate at Georgetown University, the U.S. church has spent more than $3 billion on settlement-related costs between 2004 and 2016 and close to half a billion dollars in that same period on child-protection efforts, from Virtus background checks to victim assistance offices. Gautier said 2004 was the first year such figures were available and the 2016 figures are the latest available.

“Despite all the policies, procedures, codes of conduct, reports and training, unacceptable events still occurred,” the report said, noting 25 allegations were made by minors and reported to local civil authorities.

The report reminded church leaders that “we must be ever vigilant in our parishes and schools,” warning against complacency. “One act of abuse is one too many,” it said.

Because of what the church is doing to address sexual abuse and in light of the “current climate of sexual harassment in Hollywood, in politics, this dialogue is important and continues to come forward,” Deacon Nojadera said. “And what is happening now, folks are talking about elder abuse, domestic abuse, cyberbullying. In the end, any form of abuse will not be tolerated.”

PREVIOUS: Priest asks for prayers for victims of Bronx fire and their families