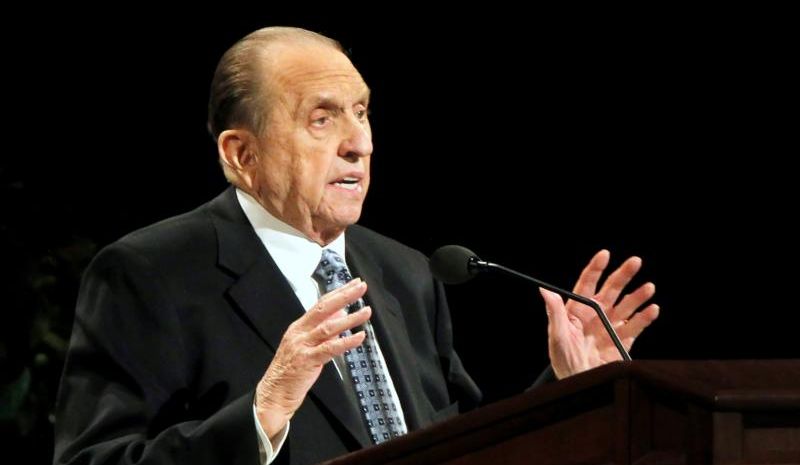 “During his tenure as president, understanding and friendship developed between our two communities on national and local levels,” Cardinal DiNardo said in a statement issued Jan. 3.

“As we engage important questions on family and the dignity of the human person, Catholics and Mormons work together and support each other. Today, Catholics join their Latter-day Saints brothers and sisters in commending his soul to the mercy and love of God,” the cardinal said.

Archbishop Charles Chaput said Jan. 3 in a statement that “Catholics in Philadelphia enjoy a warm working friendship with the Church of Jesus Christ of Latter-Day Saints on issues of mutual concern and importance to the whole nation.”

The archbishop said he was “deeply saddened” to learn of Monson’s death.

“In his efforts to build up the good in our society, he was a leader of exceptional character and ability. On behalf of the Catholic Church in Philadelphia, I offer my deepest condolences to the Monson family and the wider LDS community, and may God grant President Monson eternal life and peace.”

Monson was the 16th president of the Mormons, whose church was established in the early 19th century.

He served in the Naval Reserve, reaching the rank of ensign. He saw no action in World War II and rejected a commission just before the outbreak of the Korean War to serve as counselor to his local Mormon bishopric. He himself became a bishop, akin to a Catholic parish pastor, at age 22.

Monson taught briefly at the University of Utah, then worked in the advertising department of the Deseret News, based in Salt Lake City, and the Deseret News Press, the Mormons’ publishing arm.

Monson “has been a good friend and supporter in our mutual efforts to support the common good and care for the most vulnerable both at home and abroad,” said a Jan. 3 statement from Bishop Oscar A. Solis of Salt Lake City. Monson was also “an advocate of unity and believed in the goodness of each person,” the bishop added.

“He embraced people regardless of faith, seeing in them the image of Jesus,” said Bishop Solis. For Monson, he added, “the Sermon on the Mount was not just a platitude but a way of life.”

In 1959, at age 31, Monson became president of the church’s Canadian mission serving the provinces of Ontario and Quebec, working there until 1962. In 1963, he joined the church’s Quorum of the 12 Apostles — the youngest man in 53 years to serve in the post and 17 years younger than the next-youngest member, Gordon Hinckley, whom Monson succeeded as Mormon president in 2008.

Monson is credited with opening the church’s archives to researchers and scholars, even at the risk of them uncovering documents that contradicted Mormon teaching and practice, and with cultivating more missionaries within the church and opening the door for more and younger women to serve as missionaries.

However, he drew the line at ordaining women to the Mormon clergy and fought against same-sex marriage. In 2015, the church declared any Mormons in such a union to be apostates, which caused an estimated 1,500 Mormons to resign from the church. He also wrote to Mormon churches in California in 2008 urging them to support Proposition 8, which would eliminate the right of same-sex couples to marry in the state. The measure passed but ultimately was rejected by the courts.

PREVIOUS: Vermont parishes set to celebrate the Year of the Family in 2018