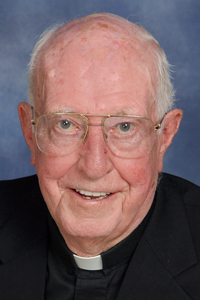 He was born March 29, 1930, the son of the late Daniel J. Herron and the late Beatrice (Allen) Herron. He attended Transfiguration School and West Catholic High School for Boys before entering St. Charles Borromeo Seminary.

He was assigned as parochial vicar at Visitation B.V.M., Norristown, and Our Lady of Good Counsel, Southampton, until his retirement in 2002 with residence mostly in Longport, N.J.

Father Zachary Navit, who was assigned with Father Herron at Visitation B.V.M., remembers him as a mentor. “I could go to him for good, sound, practical advice that came from his deep faith,” he said.

“Nothing was too much for him,” Father Navit recalls. “He was willing to jump in to do anything that needed to be done. He was dedicated to the sick, visiting shut-ins, and he also worked with married couples and in  marriage preparation.”

On a personal level, Father Navit recalls Father Herron as a member of “Arnie’s Army” who enjoyed golf, but also the Jersey Shore where his family had a home, plus visits to his ancestral home, Ireland.

Although Father Herron had the Irish wit that goes with his heritage, “he was basically a quiet man, but what he said was important,” Father Navit recalls.

There will be a viewing for Father Herron at St. Francis of Assisi Church, Springfield, on Wednesday, Jan. 17 at 9 a.m., followed by his 11 a.m. funeral Mass with Archbishop Charles J. Chaput as the celebrant.

Concelebrants will include Fathers Francis Mulranen, Wilfred Maloney, Edmond Speitel, Richard Hadyka and Father Navit, who will be the homilist.

Father Herron is survived by his sister-in-law Mary Herron, his nephews and a niece, and grandnephews and grandnieces.