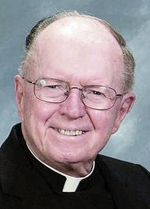 He was ordained May 19, 1951 at the Cathedral of SS. Peter and Paul  by Bishop Hugh L. Lamb and his first assignment was as parochial vicar at St. Patrick Parish, Pottsville.

“I worked with him for about two years,” said Marianne Houston, the business manager at Mother of Divine Providence. “He was a very gentle, calm person and just a kind man.”

While Father Gormley enjoyed life, Houston recalls, he was a very holy man which showed in the way he celebrated Mass and in the confessional.

Father Gormley was named pastor emeritus of Mother of Divine Providence in 1996, then served as senior priest and in residence at St. Matthias Parish, Bala Cynwyd, before retiring to St. Joseph Villa, Darby.

Father Michael Dilorio, who was stationed with Father Gormley and remained a good friend ever after, recalled his wonderful qualities as a priest.

“That is not only my opinion but the opinion of anybody that ever met Charlie Gormley,” he said. “The priests who lived with him looked at him the same way. It was one of the happiest times in their life.”

There will be a viewing for Father Gormley at Mother of Divine Providence Church on Friday, Feb. 2 beginning at 9 a.m., which will be followed by his 11 a.m. funeral Mass with Bishop Edward M. Deliman as the principal celebrant.

Concelebrants will include Msgr. Francis X. Dreger, who was a classmate of Father Gormley at St. Charles Seminary, also Msgrs. Gerard Mesure, Arthur Rodgers and Michael McCulken, and Father Martin Cioppi and Father DiIorio, who will be the homilist.

Father Gormley is survived by his brothers, John W. and William J. Gormley, and nieces and nephews.