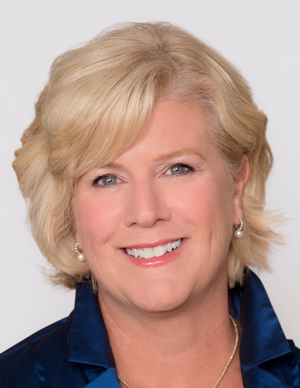 Mary Jo Timlin-Hoag, senior executive director of the Central Association of the Miraculous Medal in Philadelphia.

The Central Association of the Miraculous Medal (CAMM) has announced that Mary Jo Timlin-Hoag has been appointed senior executive director, the first woman to serve in that capacity in the organization’s 103-year history.

The association was founded in 1915 by Vincentian Father Joseph Skelly to promote devotion to the Blessed Mother under the title of Our Lady of the Miraculous Medal.

Located in the Germantown section of Philadelphia, CAMM is best known for its Shrine of Our Lady of the Miraculous Medal, a favorite place of prayer and novena for generations of Catholics.

CAMM also supports the formation and education of Vincentian seminarians, care for aged and infirm priests and programs to assist the poor and the works of the Congregation of the Mission (Vincentians).

Timlin-Hoag is no stranger to the shrine. When she was a child her parents, John and Anne Timlin, had a devotion to the Virgin Mary and would bring Mary Jo regularly to the weekly novena.

“My parents were very dedicated to the shrine,” she said.

Their own parish, St. Martin of Tours in Northeast Philadelphia, did have a beautiful altar dedicated to the Blessed Virgin, but the shrine was special.

This connection with CAMM and the shrine has been reinforced through her brother, Father John Timlin, C.M., who directs formation at the Vincentians’ nearby De Paul Novitiate.

After St. Martin School, Timlin-Hoag went on to Mount St. Joseph Academy and Penn State University. Over her professional career her focus has been in health care and the business aspects of that field.

She had leadership roles at Aetna, GE Healthcare, General Motors, McKesson, MedScape and Children’s Hospital of Philadelphia. She was also active through service on several charitable boards and a member of a number of professional societies.

In her personal life, she and her husband Gary Hoag settled in Holy Martyrs Parish, Oreland, 27 years ago and raised their two children, Colleen and Matthew. There is now one grandchild and a second on the way.

Throughout her life Timlin-Hoag’s childhood devotion to the Blessed Virgin has not wavered. Through grade school, high school and in nursing school, as a young married woman and to this day, it remains.

Her rosary is with her constantly and has helped her through the inevitable crises of life, including sicknesses of her children and the death of her husband at a relatively young age in 2016.

After mourning his death she began to consider seriously her own future. She did not want to go back to the corporate world, but strongly felt at this time in her life she should apply the skills she had acquired to help others, by giving back.

Coming to CAMM was perfect. “I know the mission, I lived it for many years,” she said. “What excites me the most is the opportunity to support that mission in a different way.”

With three decades in the business world she brings to the table leadership experience in a varied skill set including operations strategy, program development, employee engagement, contract negotiations, change management and organizational development.

All of these are valuable assets that will help CAMM and all of its entities, including the shrine, continue hopefully for years to come.

“This is really a good place to put my energy and my knowledge,” Timlin-Hoag said. “It is very different than what I have done in my past career. It’s a happy and joyous way of giving back and I’m happy and proud to be part of this organization.”

PREVIOUS: What’s a nice Presbyterian doing in a Catholic convent?