What’s a nice Presbyterian doing in a Catholic convent? 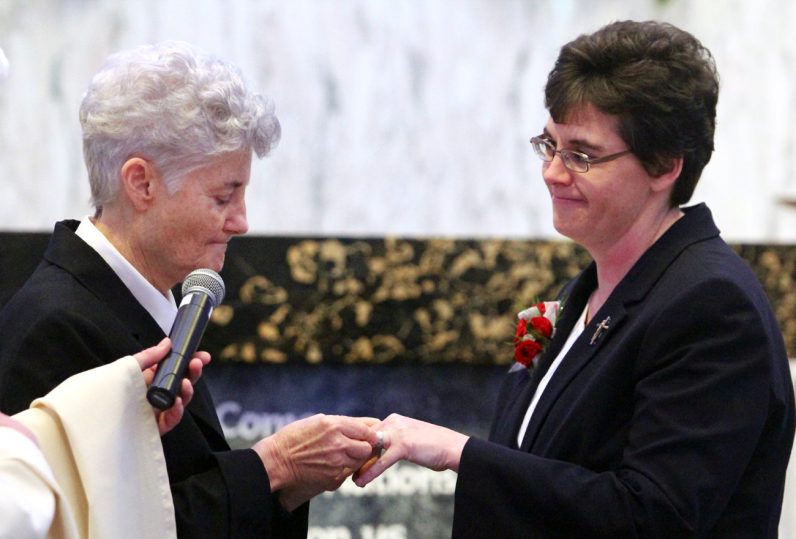 Sister Kimberly Kessler took her perpetual vows as a Sister of the Redeemer at the Redeemer Sisters’ Chapel in Huntingdon Valley on Dec. 9 with their chaplain, Father Timothy Judge, presiding.

For Sister Kimberly it was a milestone on a long journey — not the end, because that happens when we die and begin a new journey. Nevertheless it was a singular moment. Growing up in the Torresdale section of Northeast Philadelphia, she probably would have thought it more possible that she would be the first woman on the moon than a Catholic nun.

For one thing, her family — consisting of her mom Diane, who is now deceased; her dad, John; older sister Lisa and younger brother John — were Presbyterian. They were not especially a church-going family, but one of good Christian values, who in her own words taught her to be “a caring dedicated, committed and self-giving person.”

Kimberly attended Redeemer Lutheran Grade School and Abraham Lincoln High School, before going on to Manor Junior College and Beaver College, with the intention of becoming a physical therapist. She did have Catholic relatives on both sides of her family, and Manor College is under Ukrainian Catholic auspices.

But her first close encounter with Catholicism came when she took a volunteer internship at Holy Redeemer Health System in Meadowbrook, which is conducted by the Sisters of the Redeemer (formerly Sisters of the Holy Redeemer). Ultimately she got a full-time position with the health system and after a time in the Rehabilitation Department at St. Joseph’s Manor. 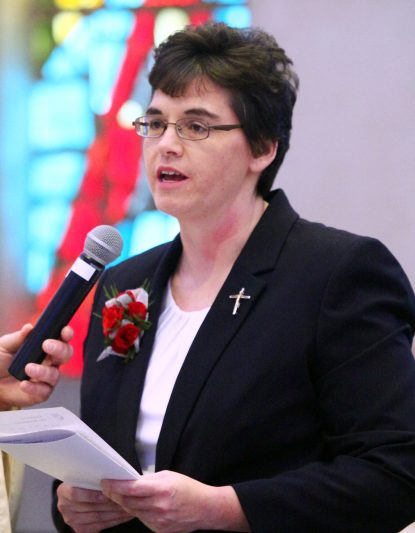 Sister Kimberly Kessler professes her final vows as a Sister of the Redeemer Dec. 9 at the Redeemer Sisters’ Chapel in Huntingdon Valley. (Sarah Webb)

Sister Bartholomew Proell, one of the older sisters, especially impressed Kimberly and the two became friends.

“Are you married, do you have a boyfriend?” asked Sister Bartholomew. No, she didn’t, was the answer.

It didn’t dawn on her that Kimberly might not be Catholic and the question didn’t come up. Sister Bartholomew, who was clearly thinking “religious vocation,” invited Kimberly to join the sisters’ various religious services. Kimberly didn’t have a clue why.

But another friend and co-worker, Helen, who was a devout Catholic, understood. “You should tell her you’re not Catholic,” she advised. Another sister inadvertently settled the issue. It was one evening after a service and Kimberly joined the sisters for a meal.

“Kim, what’s your parish?” she asked, in typical Philadelphia fashion, where in the past Catholics identified by parish, not neighborhood.

It was an awkward moment. “I’m not Catholic,” Kimberly replied.

Undeterred, Sister Bartholomew was determined that Kimberly should become Catholic and after three years enter the convent.

The truth is Kimberly was open to conversion but becoming a nun was another matter and at that point it was not at all on her radar. She underwent RCIA at nearby Our Lady of Calvary Parish, and was received into the church.

Meanwhile she was still living at home, and her family did not understand her decision. Her mother thought it was her fault for not taking the children to their own church. “I assured her it wasn’t her fault,” Sister Kimberly said.

However at Holy Redeemer she received encouragement and support from her coworkers, and over time began seriously to consider entering the convent. But she had doubts; was she really worthy?

“There was a yearning from within my heart and soul that I wanted to grow deeper in prayer,” she recalled at her perpetual vows ceremony. “This was foreign and scary to me, it was a mystery. I kept questioning my prayer life and faith. What did I know about praying and attending Mass regularly? God would keep drawing me back to the sisters and I wanted to be with them.”

Through the sisters, her prayer life deepened. In 2005 when World Youth Day was held in Cologne, Germany, the sisters suggested she attend. She agreed and it was arranged that she should travel over with a group from St. David Parish in Willow Grove.

She would have liked to do a bit of sightseeing in Germany but it was also arranged that she should spend a week at the Motherhouse of the Redeemer Sisters in Wurzburg. During this brief period of work and prayer in Wurzburg away from her daily routine, her resolve to enter religious life clarified.

At quiet time in the chapel, she prayed, “Help me Lord.” A strong feeling went through her body and she knew. She would enter the convent. God was calling her.

Back home it could not happen right away. First in 2006 there was a year as an aspirant before being formally received for formation by the congregation. Normally this can be spent at home. Because her family still had doubts about what she was undertaking she chose to spend the year with the Redeemer Sisters, although not officially a member. Gradually her family did come to accept her decision when they saw how happy she was.

There was a great sadness in her life six years ago with the death of her mother. The funeral service was held at the Redeemer Sisters’ chapel. The ring Sister Kimberly wears as a bride of Christ was given to her by her father. It is the ring he had given to her mother, his bride, on their wedding day.

Today Sister Kimberly divides her time working as a pastoral care associate comforting patients at Holy Redeemer Hospital and serving as vocation director for her congregation.

She knows her own vocation story wouldn’t be possible without the encouragement of many others. For example, Sister Ellen Marvel, her director of formation, and Sister Anne Marie Haas, provincial leader for the congregation; Sister Bartholomew and her first friend at Holy Redeemer, Helen, both of whom have gone home to God.

Also, there was Sister of Mercy Mary Trainer at Cranaleith Spirituality Center who provided an outside perspective for her vocation journey. The role of her dear parents, who of a different faith laid the foundation for everything, was also important.

But in the end no one could make her choice for her. It was Sister Kimberly herself who made the final decision to respond to God’s call. And so it is with everyone, teen or adult, who enters into service for the Lord. 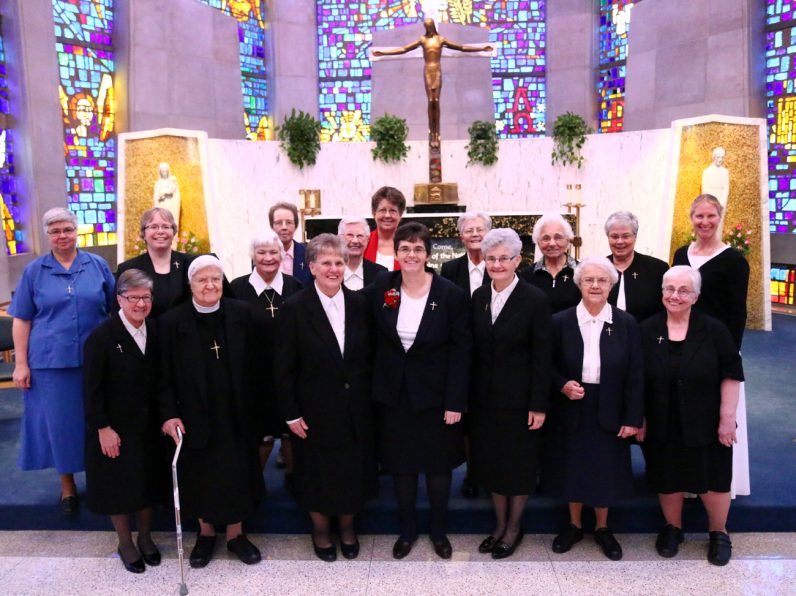 Sisters of the Redeemer pose for a photo after Sister Kimberly Kessler’s profession of vows Dec. 9 at the Redeemer Sisters’ Chapel. (Sarah Webb)

NEXT: Exec with long link to Miraculous Medal Shrine takes the reins