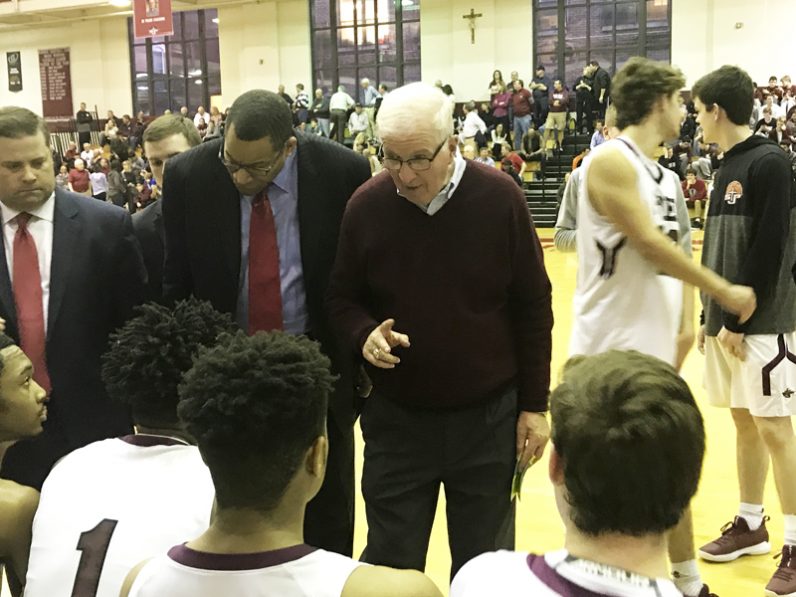 A touch of heaven.

Family, friends, former players, former assistant coaches, Prep faithful and longtime Catholic League fans enveloped the Prep’s standing-room-only Kelly Fieldhouse to pay homage to a man who has coached at every level for five decades and, thanks to the win over Lansdale Catholic, 1,000 combined high school and college victories.

After the victory, Morris returned to his small office, surrounded by wall-to-wall pictures and mementos. A man who shuns limelight and lives by the adage that actions trump words, Morris appeared extremely content, a tad fatigued and significantly relieved that Speedy Morris Day, which included television coverage, was finally over.

“So many memories out there,” said Morris. “Players who played for me and coached with me … I teared up a few times. I’m very, very grateful. Very, very blessed.”

That Morris has lived a very, very blessed life was crystal clear. At every turn, someone from his past insisted on a handshake, hug, or picture, or all three. His countenance strongly suggested that he didn’t mind.

Those who know him best would tell you that he would much rather have simply focused on getting his team prepared to play the Crusaders, but avoiding the spotlight would have been an exercise in futility. So Morris went with it.

“When you think about his legacy and how it has impacted others and continues to impact others, he is truly one of the great Philadelphians of our time,” said John Griffin, the former St. Joseph’s University coach who starred for Morris before graduating from Roman Catholic in 1974, and the father of current Roman coach and Prep 2007 alum Matt Griffin, like his father a first-team All-Catholic under Morris. “He is also one of the great Catholics of our time, and I say that seriously.

“Think about his life. From a Catholic perspective, who has made more of an impact on the archdiocese? People like (Mercy Sister) Mary Scullion come to mind, but Speedy Morris is also in that special category. He’s taught young basketball players for more than 50 years. How many of them have gone on to do the same? One hundred? Two hundred? More? And how many people have they impacted? It’s amazing when you think of this man’s impact.” 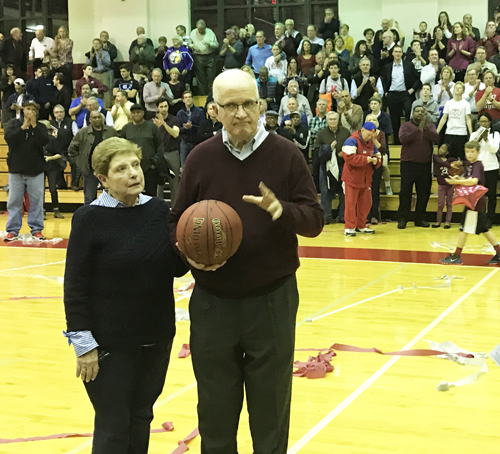 Speedy Morris and his wife Mimi receive warm applause from the crowd in recognition of his 1,000th career win and 50 years as a coach on the high school and collegiate levels. (John Knebels)

A lifetime worshipper at St. John the Baptist Church in Manayunk and a daily communicant, Morris coached CYO basketball at his grade school alma mater during his senior year at Roman Catholic, from which he graduated in 1960. He would eventually inherit the varsity Roman Catholic job in 1967 and ultimately lead the Cahillites to six of their 30 Catholic League titles while accruing a dazzling record of 347-82.

Morris would later coach at Penn Charter High School and then at La Salle University, first as women’s coach and then as men’s coach. He took over the Prep in 2001 and led the Hawks to back-to-back championships in 2003-2004.

But on this afternoon, wins and titles were secondary. This was a celebration of a life well lived, a life that remains vibrant, passionate and strong.

“You look around this gym today and see the guys and girls that came back, and the text messages and calls, and see the impact that he’s made on so many lives. It’s just unbelievable,” said Keith Morris, one of Speedy and Mimi Morris’ four children and current Prep assistant coach. “It’s an emotional week for him, too. He apologized to the team this week for all the commotion going on around him. That’s who he is.”

One guy that didn’t mind the commotion at all was senior Darius Kinnel. Late in the second quarter, Kinnel drove to the hoop for a highlight reel layup, which gave him 1,000 career points. The game was temporarily stopped and Kinnel received his own well-earned fanfare.

“Getting this on Speedy’s special day too was a wonderful moment for me,” said Kinnel. “I’ll always remember it for a lot of reasons.”

Morris offered Kinnel quite a compliment.

“I told him his accomplishment was far more better than mine,” said Morris. “It took him four years. It took me 50 years.”

In an interview with CatholicPhilly.com, Jim O’Brien, current assistant coach for the Philadelphia 76ers and former NBA head coach who played for Morris at Roman Catholic before graduating in 1970, called Morris an iconic figure.

“Speedy was one of the reasons I got into coaching,” said O’Brien. “I was lucky to have him as a coach and mentor. It’s been a joy for him to be in the lives of so many people, and so many of those people are able to express gratitude toward him. It’s well deserved.”

Carl Arrigale, the current coach at Neumann-Goretti who played for Morris at Penn Charter, attended the game despite having to coach his own game a few hours later in South Philly.

“I wouldn’t have missed it for the world,” said Arrigale. “Great family. A great man. I’m glad to be a part of it, both by him beating me as a coach and me playing for him as a player. My two years playing for Coach was a great experience. I really enjoyed it. He made it fun.”

Ironically, the coach he would compete against later that evening, the aforementioned Matt Griffin, was also on hand.

“He taught me so much in my life,” said Griffin. “Speedy loves the game of basketball, but more importantly, he loves impacting people’s lives. I think that’s what keeps him going on for so long. He cares so much about people.”

Steve Vasturia, the all-time leading scorer in Prep history and former University of Notre Dame standout, said it was an “honor” to play for Morris.

“He had such a positive impact on my life both on and off the court that continues today,” said Vasturia, a 2013 Prep graduate who now plays international basketball in Berlin, Germany. “I am lucky to call him a friend and couldn’t be happier that he has achieved this amazing milestone.”

As the post-game buzz subsided and family and close friends (and a reporter or two) hovered around the hallway outside Morris’ office, Chris Cmiel, a fifth-grade student at St. Genevieve School in Flourtown and one of Speedy and Mimi Morris’ eight grandchildren, was asked what words come to mind that best describe his grandfather.

“The first word that comes to my mind is kind,” he said. “He’ll give anything just for you.”

That about says it all. 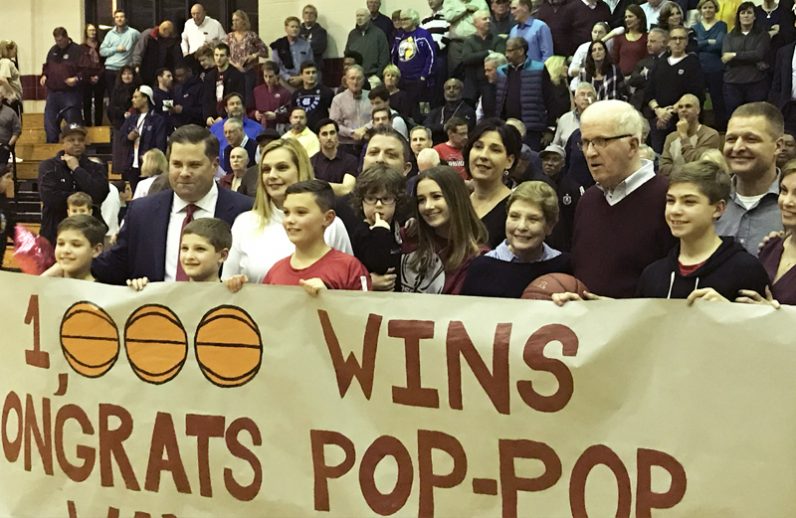 The Morris family celebrates a milestone day for Speedy Morris Jan. 12 as he crossed the 1,000-win mark in his long career. (John Knebels)

PREVIOUS: Many shooters have the hot hand in Catholic League gyms

NEXT: Point for point, Catholic League boys’ basketball is a close call