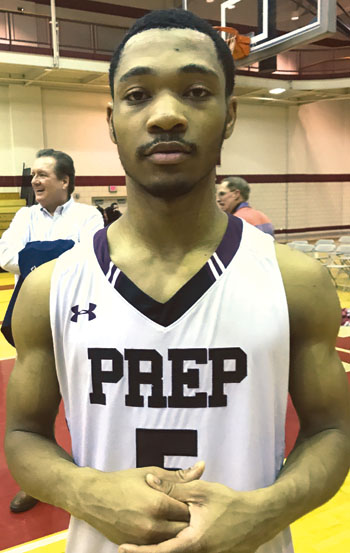 Darius Kinnel, a senior at St. Joseph’s Prepartory School, scored his 1000th point at a Jan. 12 match against Lansdale Catholic.

The following final scores reflect the tight window faced by players and coaches on a game-by-game basis. A jump shot here and foul shot there could literally provide the difference between preparing for the playoffs and watching from the stands.

On a driving layup with 1:51 left in the second quarter, Kinnel reached the quadruple-point plateau.

“I just tried to take what was given to me,” said Kinnel, the Catholic League’s second leading scorer, how 21.4 points per game slightly behind Conwell-Egan senior Patrick Robinson’s 22.2  “I tried to be aggressive all game and it just happened that way. Scoring 1,000 points was a goal of mine as a freshman. I can’t believe it. I’m blessed.”

Kinnel said “getting this on Speedy’s special day too was a wonderful moment for me” and added that Morris apologized to him for sharing the spotlight on Kinnel’s special day.

“I told him his accomplishment was far more better than mine,” said Morris. “It took him four years. It took me fifty years.”

Not quite, said Kinnel.

“What Coach Morris has done is hard to imagine,” he said. “I’m just very glad we were able to be a part of it.”