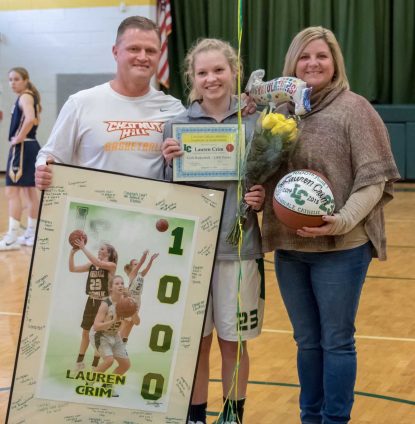 Lauren Crim, center, celebrates her milestone of scoring 1,000 career points, along with her parents Scott and Christine, at Lansdale Catholic High School Jan. 13.

To say that Lauren Crim was thankful is an understatement.

On Jan. 11 at West Catholic, the Lansdale Catholic senior basketball standout scored her 1,000th career point. Since her moment of glory, Crim has had time to reflect.

“It was a huge game for us,” said Crim. “I knew that I needed 13 points, but the priority was to win that game.”

Crim scored her 1,000th at the end of the third quarter. With West Catholic attempting a full-court press, Crim took a pass from freshman Olivia Schneider, traveled the length of the floor, and canned a short-side jumper that rattled around the iron before meeting mesh.

As players and head coach Joe Mack embraced her near midcourt, the game was momentarily halted to honor Crim’s accomplishment.

“I can’t thank West Catholic enough for stopping the game for me and letting me enjoy the moment,” said Crim, who in the fall goaltended LC’s soccer team to the Catholic League championship final before losing to Archbishop Ryan, 1-0.

The night got even better in the fourth quarter when Holy Family University-bound senior teammate Brady Wassel nailed a last-second shot to secure a 50-48 triumph.

“That really made the entire night unbelievable,” she said.

Less than 48 hours later, in an afternoon home contest versus non-league opponent Pope John Paul II, Crim was recognized in a pre-game ceremony. Sandwiched between parents Scott and Christine, Crim was presented a basketball and a large framed picture adorning numerous congratulatory messages, three pictures of herself, and four single digits – a one and three zeroes – in green and gold school colors.

Next year, Crim will play basketball at Chestnut Hill College and study to become a physician’s assistant.

“The whole week was something I will never forget,” said Crim. “It really was great.”

Already past the midpoint of the season, the Catholic League girls’ basketball standings feature six teams with winning percentages of .700 or better.

At one point, Archbishop Ryan was a perfect 7-0 and had started the season with a program-record 17 consecutive victories. The Ragdolls then dropped a pair of nail biters: 48-46 against Cardinal O’Hara on Jan. 23, and 53-51 at undefeated Neumann-Goretti on Jan. 25.

“This season has been so fun and definitely one that I’m going to remember,” said Ryan senior guard Madison Taylor. “We started out really strong and I think we’re still going strong.

“I think it gives us an idea of what playoffs will be like and what to expect. It shows where we stand going deeper into the season. They were just tough games, but we got past them and we definitely still have the same positive attitude we had from the start. I don’t think anything can change that.”

Defending champion Cardinal O’Hara is at 6-2. The Lions dropped a 47-42 decision versus Neumann-Goretti and a 33-29 thriller against Archbishop Wood.

“This year is a lot different from last year, not only with our team but with the Catholic League,” said O’Hara senior Kenzie Gardler. “This year there are about seven teams that could potentially win the PCL, so it is a very competitive year, so any win is a great win.

“We knew Ryan was going to be tough; they were undefeated and we knew they were coming into the game with confidence when we were coming in trying to bounce back from two back-to-back losses. We stuck together as a team and played hard the whole game and showed who we are as a team at critical times in the game.”

First-place Neumann-Goretti has already faced a brutal schedule and, barring an upset, appears a lock to finish its regular league season unscathed. The Saints have defeated 6-2 O’Hara, 7-1 Archbishop Wood, 7-3 Bonner-Prendergast, 6-2 Archbishop Carroll, 7-2 Archbishop Ryan, and 5-3 Lansdale Catholic. The rest of their games are against teams with losing records.

NEXT: 13 of 14 Catholic League teams vying for playoff spot