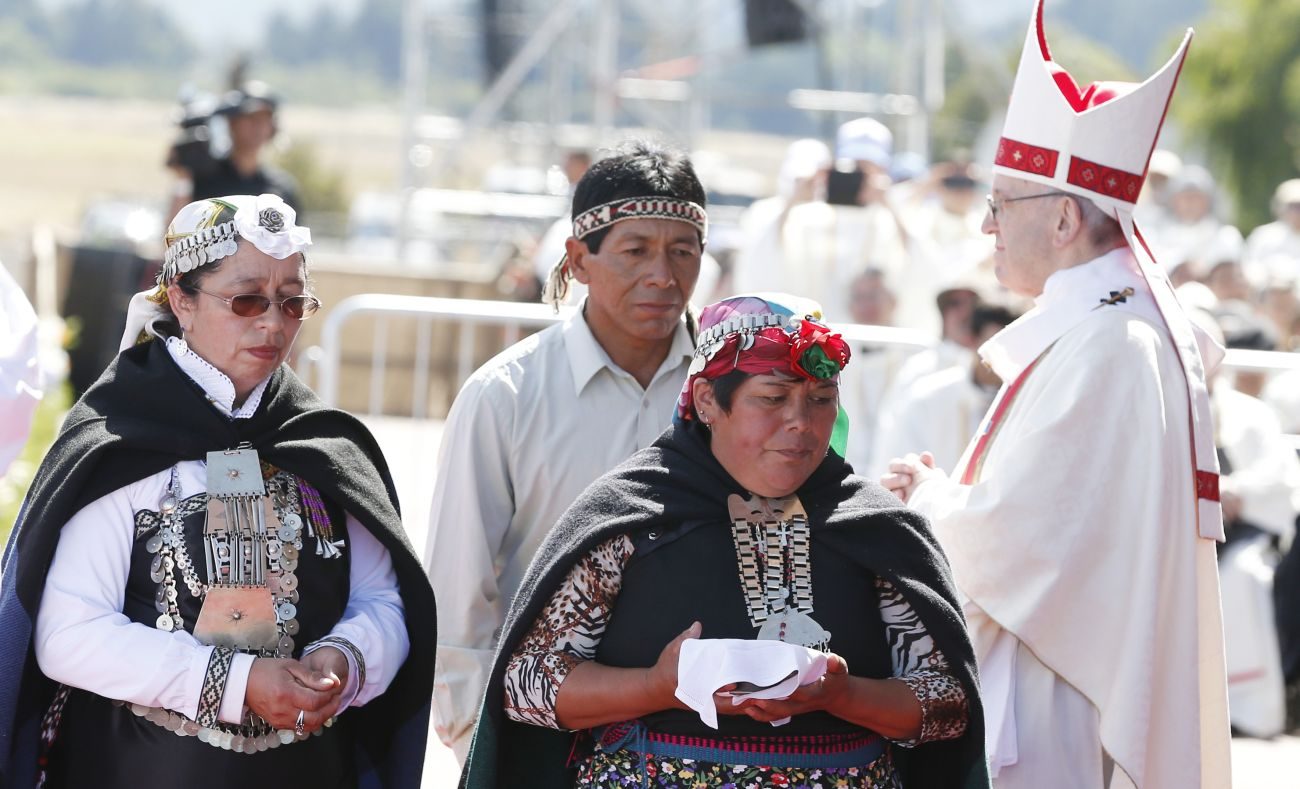 TEMUCO, Chile (CNS) — Celebrating Mass in a land steeped in indigenous history and culture, Pope Francis said the greatest threat facing humanity is the stifling of differences driven by the idea that some cultures are better than others.

Greeting members of the Mapuche people and other indigenous peoples living in southern Chile Jan. 17, Pope Francis recognized the suffering and injustice endured by the indigenous population.

“Seen through the eyes of tourists, this land will thrill us as we pass through it, but if we put our ear to the ground, we will hear it sing: ‘Arauco has a sorrow that cannot be silenced, the injustices of centuries that everyone sees taking place,'” Pope Francis said, quoting famed Chilean songwriter Violeta Parra.

In his homily at the Mass at Maquehue Airport in Temuco, the pope also acknowledged that the area, while rich in history and beauty, brought memories of “sorrow and pain” and “was the site of grave violations of human rights.”

Maquehue Airport, a Chilean air force base, was used as a torture and detention center during the brutal dictatorship of Augusto Pinochet from 1973 to 1990.

“We offer this Mass for all those who suffered and died, and for those who daily bear the burden of those many injustices,” the pope said. “The sacrifice of Jesus on the cross bears all the sin and pain of our peoples, in order to redeem it.”

While supporting the rights of the indigenous peoples to maintain their cultures, Pope Francis insisted that the only way to survive and thrive was to remain united and to shun violence.

“Let us instead seek the path of active nonviolence as a style of politics for peace,” he said. “Let us seek, and never tire of seeking, dialogue for the sake of unity. That is why we cry out: ‘Lord, make us artisans of your unity.'”

Exercise “the solidarity that makes us say: We need one another and our differences so that this land can remain beautiful!” he told them. “It is the only weapon we have against the ‘deforestation’ of hope.”

According to the Vatican, an estimated 150,000 people attended the Mass. Many of them were singing, cheering, and holding signs written in the native language of the Mapuche people, Mapudungun.

The Mass began with a traditional greeting to the pope delivered by a group of indigenous people.

In the Araucania region of southern Chile, Mapuche communities have been stripped of their land repeatedly — first by Spanish colonists, then by settlers who moved to the region to farm, and more recently by timber plantations.

Despite the pain and division associated with the territory, Pope Francis called on the people of southern Chile to work toward building unity and resist attempts at uniformity.

“Unity is not an idol or the result of forced integration; it is not a harmony bought at the price of leaving some people on the fringes,” the pope said.

Like the intricate designs of the traditional Mapuche clothing that blends different materials and colors, he added, unity is a “reconciled diversity” of all peoples with no notion “that there are higher or lower cultures.”

Thousands of people lined the streets of Temuco, welcoming the pope and waving yellow and white flags. However, a small group of protesters were also demonstrating outside the entrance to the airport.

The demonstrators held a large banner protesting against Bishop Juan Barros of Osorno, a bishop accused of turning a blind eye to the activity of a notorious priest accused of sexually abusing boys.

PREVIOUS: In Canada, new law could mean changing route of March for Life