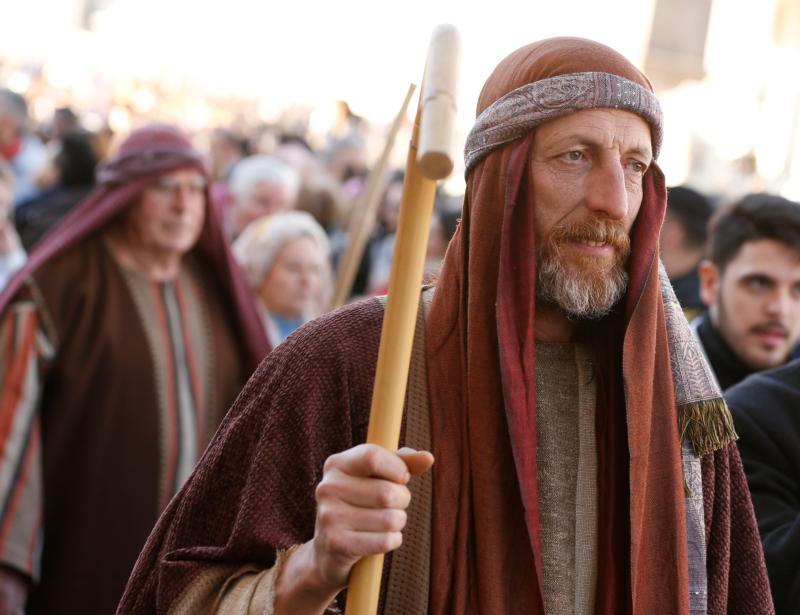 People participate in an parade marking the feast of the Epiphany in St. Peter’s Square at the Vatican Jan. 6. (CNS photo/Paul Haring)

VATICAN CITY (CNS) — To follow Jesus, one must set out like the Magi, leaving comfort behind, following the light and offering the Lord gifts without expecting anything in return, Pope Francis said Jan. 6 during Mass on the feast of the Epiphany.

In his homily, the pope asked people to think about the Gospel story of the Three Kings and why no one else seemed to see and follow the star to Bethlehem.

Perhaps, he said, it was because “few people raised their eyes to heaven.” Today, too, people think it is enough “to have our health, a little money and a bit of entertainment. I wonder if we still know how to look up at the sky. Do we know how to dream, to long for God, to expect the newness he brings, or do we let ourselves be swept along by life, like dry branches in the wind?”

At the Mass in St. Peter’s Basilica, Pope Francis asked people to think about what star they choose to follow in their lives.

“Some stars may be bright, but they do not point the way. So it is with success, money, career, honors and pleasures when these become our life,” he said. They are like meteors, blazing for a time, but burning out.

“The Lord’s star, however, may not always overwhelm by its brightness, but it is always there: it takes you by the hand in life and accompanies you,” he said. “It does not promise material reward, but ensures peace and grants, as it did to the Magi, ‘exceedingly great joy.'”

Following the star, he said, requires freeing oneself “from useless burdens and unnecessary extras that only prove a hindrance, and accept unforeseen obstacles along the map of life.”

“If we want to find Jesus, we have to overcome our fear of taking risks, our self-satisfaction and our indolent refusal to ask anything more of life,” the pope said.

In the Gospel story, he said, it is clear that Herod fears losing his power, many of the townspeople fear what is new and the priests and scribes, who know the prophecy about the Messiah’s birth, are content just to talk about it.

“Theirs can be the temptation of those who are used to being believers: They can talk at length about the faith they know so well, but will not take a personal risk for the Lord,” he said. “They talk, but do not pray; they complain, but do no good. The Magi, on the other hand, talk little and journey much.”

Like the Magi, Pope Francis said, Christians are called to imitate the Lord in offering gifts without expecting anything in return.

God, who became “small for our sake, asks us to offer something for the least of his brothers and sisters,” the needy, the hungry, the stranger and the prisoner, he said.

“We give a gift pleasing to Jesus when we care for a sick person, spend time with a difficult person, help someone for the sake of helping, or forgive someone who has hurt us,” the pope said. “These are gifts freely given, and they cannot be lacking in the lives of Christians.”

The next day, celebrating the feast of the Baptism of the Lord and baptizing 34 infants in the Sistine Chapel, Pope Francis urged parents to speak the language of love and transmit the faith to their children with the “dialect” of the family.

“Catechists will come later to develop this first transmission of faith with ideas and explanations,” the pope told the parents of the 16 boys and 18 girls, including two sets of twin girls. But if the children have not first received an education in faith at home, “if at home parents don’t speak the language of love,” the transmission of faith is very difficult.

Children, too, have a “dialect,” the pope said. Although none of the babies was crying at that point, Pope Francis asked the adults to allow their prayers to be as simple as the cries of the little ones.

And, as he has done each time he’s baptized babies, Pope Francis assured the mothers that even in the Sistine Chapel, if their babies are hungry they should not be afraid to breastfeed them, “because this, too, is the language of love.”