Gospel message of hope often is taught by the poor, cardinal says 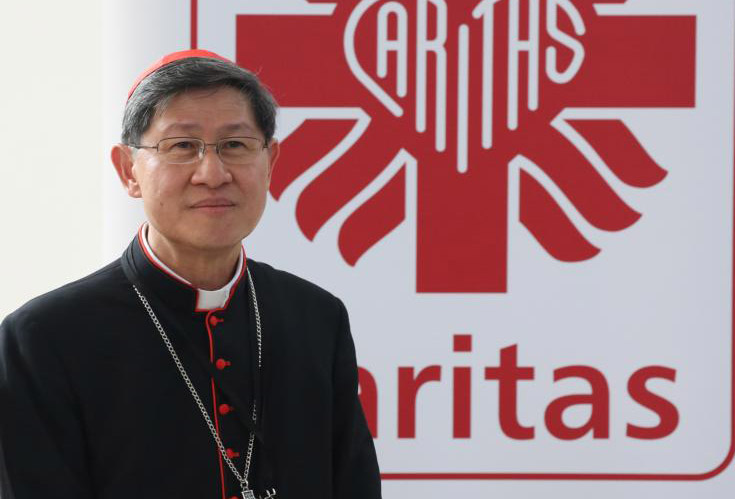 In his ministry as archbishop of Manila, Philippines, and in his travels for Caritas Internationalis, Cardinal Luis Antonio Tagle said he is reminded of the true meaning of hope by people living in situations the world would see as hopeless. Cardinal Tagle is pictured speaking to World Youth Day pilgrims in 2016 in Krakow, Poland. (CNS photo/Bob Roller)

VATICAN CITY (CNS) — In his ministry as archbishop of Manila and in his travels for Caritas Internationalis, Cardinal Luis Antonio Tagle said he is reminded of the true meaning of hope by people living in situations the world would see as hopeless.

“The poor know the frustration of dreaming and working hard with not much result,” Cardinal Tagle said. “They are betrayed by persons and institutions. But in their raw poverty, what is left for them is their humanity. They remind all of us that being human is our true and only wealth.”

While anyone can be tempted to see the fulfillment of hope in accomplishments, improved numbers and bigger bank balances, the poor celebrate the gift of life and praise the giver of life, the cardinal said in a written interview in early January.

“This is the secret of their enduring and persistent hope, which those who enjoy comfortable living, yet complain unceasingly, should discover,” he said.

Cardinal Tagle, 60, will talk and preach about hope with parish, school and diocesan leaders at the opening session and Mass of the Mid-Atlantic Congress in Baltimore Feb. 15-17.

Pride and self-sufficiency lie on the opposite end from the hope the poor witness to, he said. “Of the many challenges to hope, I consider pride the most dangerous. Pride weakens faith that gives assurance to hope. Pride makes me think I can do better than God. Pride makes me place my hope in myself. Pride makes me a pseudo-savior.”

“Whether personal or institutional, pride depletes hope,” the cardinal said.

In addition to serving as archbishop of Manila and president of Caritas Internationals, Cardinal Tagle also is president of the Catholic Biblical Federation.

Of course, the Bible is the book of hope, and “there are many Scripture verses or prayers that rekindle hope in me,” he said.

“But one that I ‘run to’ regularly is John 21:1-14,” which tells the story of the disciples’ miraculous catch of fish.

The cardinal said he often turns to the story, and “when I have labored hard and long but still end up not catching anything, I know the risen Lord is close by, watching compassionately and calling my attention so that he could direct my action.”

The story also brings consolation, he said, because it is a reminder that mission and ministry are Jesus’ work, and “my role is to work hard under his direction. The catch will be his, but I must be there with other collaborators to see the miracle, to haul the net to shore and to declare, ‘It is the Lord!'”

In that way, he said, “a seemingly hopeless situation becomes a space to return to my humble role and to witness to the true Lord.”

Cardinal Tagle’s Bible probably falls open to that Gospel story on its own. His episcopal motto, “Dominus Est” — “It is the Lord” — is taken from that passage. The Gospel account was the focus of a retreat he facilitated as a priest. And it was the subject of his homily in 2011 when he was installed as the archbishop of Manila.

Moving to Manila after 10 years as bishop of his home diocese, Imus, he said in the installation homily that the lesson of the passage — that the Lord directs the catch — is a message of hope for the church community as well as for individuals.

“The Lord guards his church. He keeps watch with us on those long nights of confusion and helplessness in mission,” the new archbishop said in 2011. “When, in spite of our good intentions and efforts, there are still the multitude of hungry people we cannot feed, homeless people we cannot shelter, battered women and children we cannot protect, cases of corruption and injustice that we cannot remedy, the long night of the disciples in the middle of the sea continues in us.”

The experience of the long night should make Christians “grow in compassion toward our neighbors whose lives seem to be a never ending dark night,” he said, and it should remind Christians that even when things are not working out as planned, the Lord is near.

The Gospel passage also is a call “to follow the Lord in our mission not individually, but together as the disciples did,” he said. “Mission is an event of the church. We will be together in failure, but we will also be together in listening to the Spirit, in beholding God’s miracles and in hauling the nets to shore.”

The bishops, priests, religious and laity share one mission, he said at his installation. “When we take different boats and even compete against each other to get the better portion of the catch for our own teams, we are not engaging in mission. Divisiveness and destructive competition will only help sink the boat.”

Now, after six years as archbishop and five years as a cardinal, he told Catholic News Service that “the faith that God is with us, especially in Jesus and in the animating power of the Holy Spirit, gives me hope.”

“The faith that assures me that creation and history are in God’s hands and these hands transform death into life, hatred into forgiveness and darkness into life — this gives me hope,” he said. “The faith that makes me see how people truly cooperate with God’s action in the world through sincere love gives me hope.”

NEXT: Bishop Bambera urges prayers for peace after attack on Coptic Christians