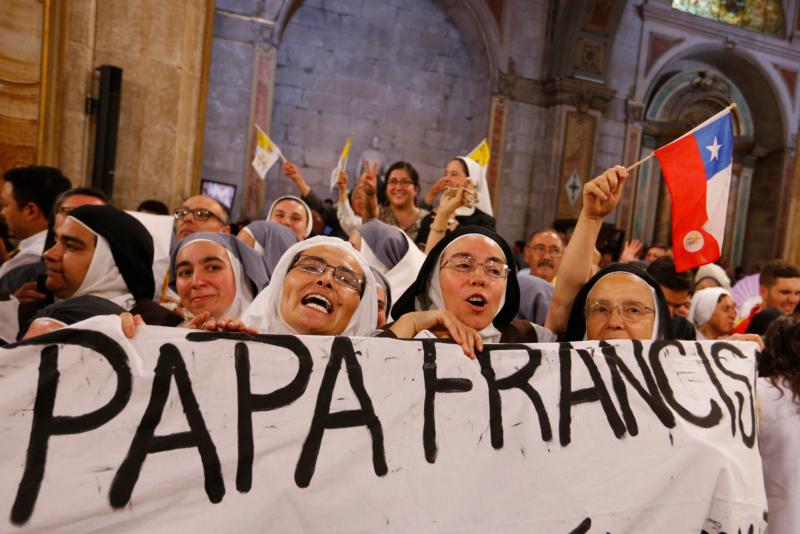 Nuns cheer as Pope Francis arrives for a meeting with priests, religious and seminarians at the Metropolitan Cathedral in Santiago, Chile, Jan. 16. (CNS photo/Paul Haring)

At the same time, he called for unity, dialogue and coexistence in each of the two countries, which have been marked by political tension and sometimes-violent conflicts. Invoking Mary, he called for compassion, which he also demonstrated as he blessed a Chilean prisoner’s unborn baby and consoled people who lost their homes in devastating floods a year ago on Peru’s northern coast.

He also acknowledged that the church must address its own problems, including sexual abuse, corruption and internal divisions.

“The kingdom of heaven means finding in Jesus a God who gets involved with the lives of his people,” he said.

Pope Francis arrived in Santiago, Chile’s capital, Jan. 15. Over the next three days, he met with young people outside the capital, celebrated Mass among indigenous people in the southern city of Temuco, and traveled to the northern desert city of Iquique, which has been a magnet for migrants.

On Jan. 18, he arrived in Peru, where he celebrated Mass in Lima and traveled to the northern coastal city of Trujillo, which suffered disastrous flooding a year ago, and Puerto Maldonado, in the heart of the Peruvian Amazon.

In both countries, the pope met with indigenous people and youth, clearly with an eye toward the Synod of Bishops on youth, scheduled for October at the Vatican, and the synod for the Amazon in 2019. He repeatedly referred to the importance of the earth, calling it “our common home,” as he did in the encyclical “Laudato Si’.”

The trip was the pope’s fourth to South America. It came at a time when politics in the region are increasingly polarized and political and economic problems have prompted many people, particularly from Haiti, Venezuela and Colombia, to seek better opportunities in other countries, where they often face discrimination.

Various countries, including Peru, are also reeling from revelations of corruption, especially multimillion-dollar bribes and kickbacks from the Brazilian construction company Odebrecht.

Speaking to an audience of diplomats and politicians that included Peruvian President Pedro Pablo Kuczynski, who had narrowly escaped impeachment a month earlier because of accusations of influence peddling, Pope Francis called corruption a “social virus, a phenomenon that infects everything, with the greatest harm being done to the poor and mother earth.”

He warned political and civic leaders in both countries against the seduction of the “false gods” of money and power and urged them to maintain unity by listening to their people, including native peoples, with their ties to the earth, as well as youth, migrants, the unemployed, children and the elderly.

The pope stressed the inextricable bonds between humans and the environment, telling leaders in Chile that “a people that turns its back on the land, and everything and everyone on it, will never experience real development.”

Both countries have seen violent clashes in recent years over large-scale development projects in indigenous territories.

In southern Chile, Mapuche communities are fighting to regain territory lost first to Spanish colonists and later to settlers who moved to the area after the country gained independence. Native forests, sacred to the Mapuche, have been razed for timber plantations, and springs and streams are drying.

There have been clashes between protesters and police, and attacks against landowners, including a high-profile case in 2013 in which a couple was killed when their house was set on fire.

Churches, both Catholic and evangelical, also have been burned. Four churches in Santiago were firebombed just before Pope Francis’ visit, and a chapel south of Temuco was set ablaze three days after his visit.

Speaking to an audience that included both Mapuche people and descendants of settlers, the pope called for unity, saying, “Each people and each culture is called to contribute to this land of blessings.” He added, “We need the riches that each people has to offer, and we must abandon the notion that there are superior or inferior cultures.” 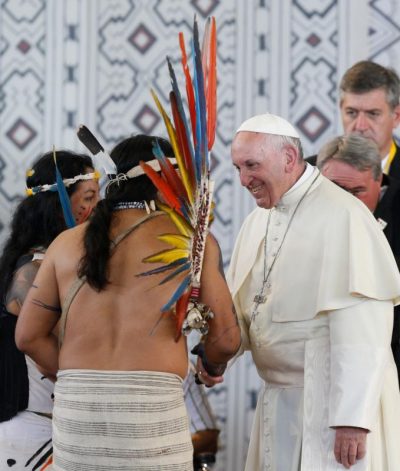 Rejecting “acts of violence and destruction that end up taking human lives,” the pope also spoke out against the signing of “elegant agreements that will never be put into practice,” which he said is also violence, “because it frustrates hope.”

In Peru, 34 people died and hundreds were injured in protests by indigenous groups in June 2009, after the government passed a series of laws that could have given timber, mining and other industries easier access to indigenous people’s lands. At the time, then-President Alan Garcia said indigenous people were blocking development in the Amazon.

Speaking in Puerto Maldonado to some 2,500 people from more than 20 indigenous groups, Pope Francis responded directly to that accusation, which has been repeated by government officials and industry executives in other countries.

“If, for some, you are viewed as an obstacle or a hindrance, the fact is your lives cry out against a style of life that is oblivious to its own real cost,” he said. “You are a living memory of the mission that God has entrusted to us all: the protection of our common home.”

The pope listed a number of threats that members of his audience had described to Amazonian bishops during an encounter the day before his visit. Governments and corporations promote oil and gas operations, mining, logging, industrial agriculture and even conservation projects without regard for the people living in the affected areas, he said.

He linked the survival of native cultures — especially groups that continue to shun contact with the outside world, many of which live along the border between Peru and Brazil — to protection of the earth.

“Native Amazonian peoples have probably never been so threatened on their own lands as they are at present,” he said. “We have to break with the historical paradigm that views Amazonia as an inexhaustible source of supplies for other countries without concern for its inhabitants.”

He urged indigenous people to work with bishops and missionaries to shape a church with “an Amazonian face and an indigenous face.” 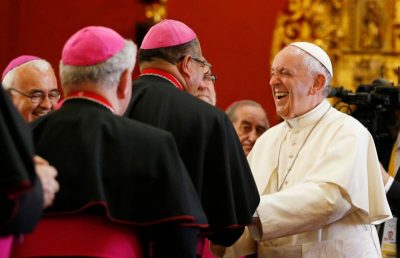 Pope Francis laughs as he meets with Peru’s bishops in the archbishop’s residence in Lima, Peru, Jan. 21. (CNS photo/Paul Haring)

The pope also linked environmental destruction to social problems, mentioning unregulated gold mining that has devastated forests and been accompanied by human trafficking for prostitution and labor.

He called attention to violence against women, urging his listeners to combat the violence that happens “behind walls” and “femicide,” the murder of women because they are women, usually perpetrated by men.

At every stop along his route, the pope was greeted by enthusiastic young people, many of whom were volunteers helping with organization and logistics.

In Chile, he urged them to make everyday decisions about their actions by asking, “What would Christ do?”

He also encouraged them to continue their education and work for a better future for their countries, while pointing to the need for improved schooling and job opportunities. Education, he said, should be “transformative” and “inclusive,” fostering coexistence.

In a moving encounter with youngsters in a home for abandoned and orphaned children founded and directed by a Swiss missionary priest in Puerto Maldonado, the pope asked their forgiveness for “those times when we adults have not cared for you, and when we did not give you the importance you deserve.”

As on all his trips, the pope met with priests, religious and seminarians, urging them to remember their roots, embrace the wounded world, maintain hope and spread joy.

Speaking with bishops, he addressed problems that included sexual abuse and divisions within the church.

In Chile, Pope Francis met privately on Jan. 16 with sex abuse survivors. He drew public criticism, however, for his defense of Bishop Juan Barros of Osorno, who has been accused of covering up sex abuse by his former mentor, Father Fernando Karadima. The Vatican sentenced Father Karadima to a life of prayer and penance after he was found guilty of sexually abusing boys.

After the pope told reporters on Jan. 18 that there was no evidence that Bishop Barros knew of the abuse by his mentor, and that the accusations were “slander,” Boston Cardinal Sean P. O’Malley said, “Words that convey the message ‘If you cannot prove your claims then you will not be believed’ abandon those who have suffered reprehensible criminal violations of their human dignity and relegate survivors to discredited exile.”

Cardinal O’Malley, who traveled to Peru Jan. 20 for the 60th anniversary of the Boston-based Missionary Society of St. James the Apostle, was among concelebrants at the pope’s final Mass in Lima.

In his public remarks to politicians in Chile and Peru, the pope acknowledged the harm done by sexual abuse, as well as the need to fight corruption not only in the public sphere, but also in the church.

Speaking to bishops in Chile, he warned against clericalism that stems from a “lack of consciousness of belonging to God’s faithful people as servants, and not masters.”

“A failure to realize that the mission belongs to the entire church, and not to the individual priest or bishop, limits the horizon, and even worse, stifles all the initiatives that the Spirit may be awakening in our midst,” he said.

He urged Peru’s bishops to follow the missionary St. Turibius’ example of being close to the people, learning the local language and culture, being a pastor to his priests and encouraging unity.

“Dear brothers, work for unity,” Pope Francis told the bishops. “Do not remain prisoners of divisions that create cliques and hamper our vocation to be a sacrament of communion.”

He also reminded the bishops that the saint had made enemies of those in power by confronting “a whole system of corruption and a web of interests” in colonial Peru.

“Charity must always be accompanied by justice,” he said. “There can be no authentic evangelization that does not point out and denounce every sin against the lives of our brothers and sisters, especially those who are most vulnerable.” 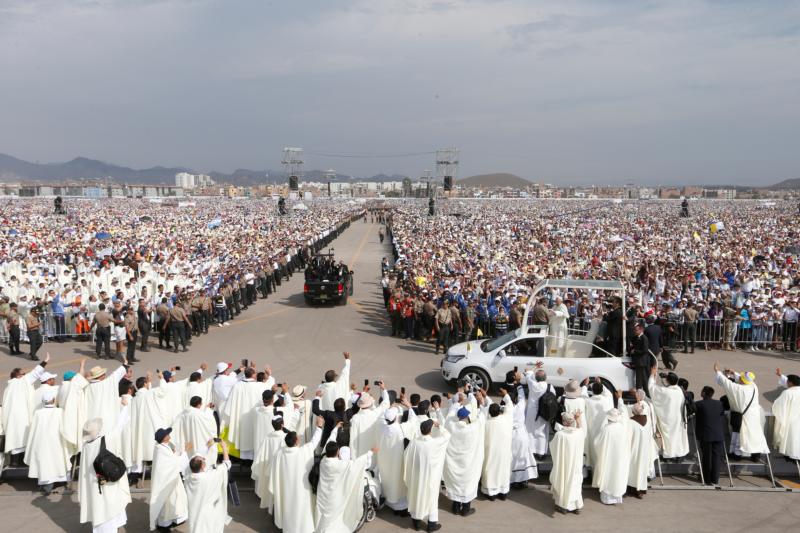 NEXT: In Holy Land, U.S. bishops say building walls does no good