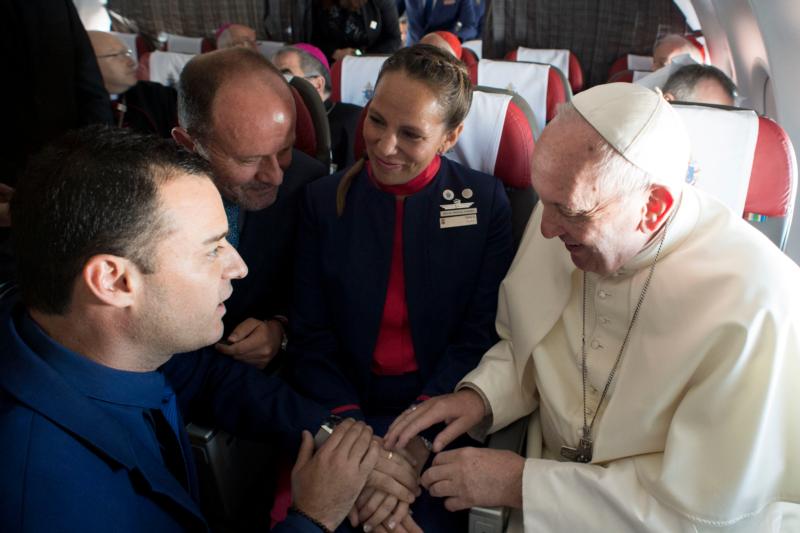 VATICAN CITY (CNS) — Pope Francis’ decision to convalidate the marriage of two flight attendants in the air sent waves of turbulence through the Catholic blogosphere, where respected canon lawyers and pastors raised serious questions about the pope sending a message that marriage wasn’t so serious.

But three days later, the pope gave reporters more of the background, demonstrating that he did not make the decision on the fly and neither did the couple.

“I judged they were prepared, they knew what they were doing,” the pope told reporters Jan. 21 on his flight back to Rome. “Both of them had prepared before God — with the sacrament of penance — and I married them.”

The blessing of the marriage of LATAM flight attendants Carlos Ciuffardi Elorriaga and Paula Podest Ruiz took place during the pope’s flight Jan. 18 from Santiago, Chile, to Iquique.

When the couple went to the back of the plane and told reporters about it, the whole thing had sounded very spontaneous.

But Pope Francis told reporters later that Ciuffardi also worked on the papal flight to Temuco the day before; Podest, whom he had married civilly in 2010, was not working the Jan. 17 flight.

So the groom had a chance to speak to the pope alone. “Later, I realized he was checking me out,” the pope told reporters. They spoke about life, marriage and the family. “It was a nice conversation.”

The next day, both attendants were on duty. They told the pope they had planned to marry in the church, but early in the morning the day of the wedding, Feb. 27, 2010, a massive earthquake struck Chile and the church collapsed.

The couple ended up marrying in a civil ceremony, and they have two daughters. They told the pope they planned to reschedule the church ceremony but just kept putting it off.

“I questioned them a bit and their answers were clear, it was for life, and they told me they had done the pre-marriage course,” the pope told reporters. Also, he said, “they were aware that they were in an irregular situation.”

In a story Dec. 19 about the crew chosen to work the papal flights, El Mercurio, a Chilean newspaper, had interviewed the couple. Already then, they raised the hope of Pope Francis blessing their union in flight. “We would love it, it’s our place, it’s our second home,” Podest was quoted as saying.

“All the conditions were there, that is clear,” he said. So, “why not do it today,” otherwise they could have put it off for another 10 years.

“The pope saw an opportunity and he worked it,” said Cardinal Kevin J. Farrell, prefect of the Dicastery for Laity, the Family and Life.

“What he is saying to the priests and to the church is that God’s time to bestow his blessings upon anybody does not necessarily depend on a rule or a regulation,” the cardinal told Catholic News Service Jan. 23.

Cardinal Farrell said that as bishop of Dallas, he would not allow couples to get married on a ranch or in a park. But the pope was not celebrating a wedding on the plane, he was convalidating a marriage, and Cardinal Farrell, like most priests, has done that in a variety of settings, including hospital rooms. “He did what any good pastor will do.”

“I thought it was an example that the pope set for all of us — that we should not be waiting for the people to come to us, but we should be going to the people,” the cardinal said. “He came out of the sacristy” as he has urged priests to do.

Convalidating a marriage on a plane “is not the general norm, but it is a way of bringing people back into the church, into the fold,” the cardinal said. “Why would we not do that?”

Msgr. Cuong M. Pham, an official at the Pontifical Council for Legislative Texts, was grateful Pope Francis provided extra details after the event. But even before knowing those details, it was clear that “the Holy Father, of all people, would take it seriously.”

“It is the task of the priest who officiates to take responsibility and be morally certain that couples who ask to be married are prepared and ready for the sacrament,” he said. That certainty is something that outside observers cannot presume to have.

Besides, he said, “as supreme legislator, the Holy Father has the authority to dispense from and even change merely ecclesiastical laws, if he judges it appropriate,” including canon law’s expectation that weddings take place in a church. Still, the pope’s officiating at a convalidation in midflight is “not meant to be replicated,” Msgr. Pham added.

But, he also said he hoped the pope’s outreach to the couple would encourage priests to be more solicitous toward other Catholic couples who have been married only civilly, finding ways to facilitate the convalidation of their unions as well.

Cardinal Farrell said he hoped other Catholic couples who have married outside the church would see what the pope and flight attendants did and realize that “the mercy of God and the blessing of God and the compassion of Christ is open to everybody.”

NEXT: Sharing ‘fake news’ makes one an accomplice in evil, pope says