Mexican bishops: Most churches damaged in September quakes were historic 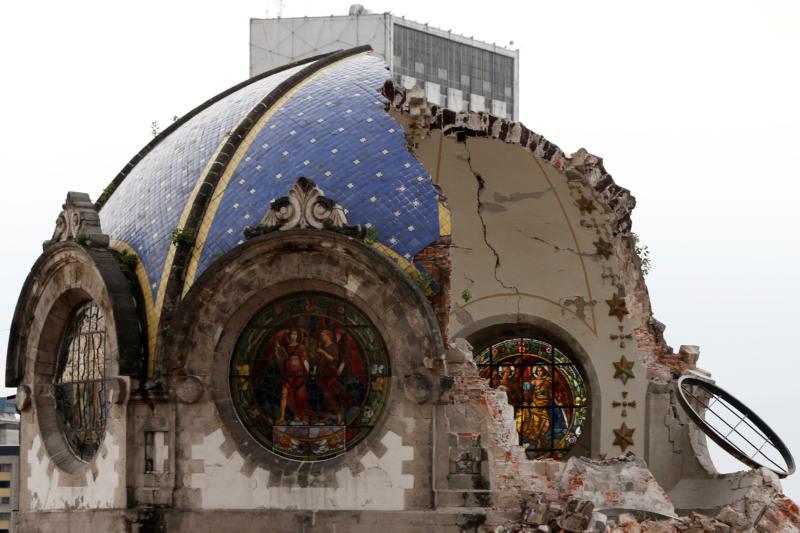 The destroyed dome of Our Lady of Angels Church is seen in 2017 following the September earthquake in Mexico City. (CNS photo/Francisco Guasco, EPA)

MEXICO CITY (CNS) — A report from the Mexican bishops’ conference has catalogued 1,850 damaged churches — including 17 cathedrals — due to the twin earthquakes that shook the country in September. The report, released Jan. 29, found that 1,603 of damaged churches were cataloged as “historic” buildings.

Some 220 churches remain closed, while 38 places of worship collapsed. Churches in at least 26 of Mexico’s dioceses suffered some sort of structural damage.

The Sept. 7 earthquake measured magnitude 8.1 and caused widespread in the Isthmus of Tehuantepec region of Oaxaca state and in neighboring Chiapas state. The temblor claimed nearly 100 lives, and the region is still badly damaged and rebuilding.

A magnitude 7.1 earthquake struck Mexico City and some central states such as Puebla and Morelos Sept. 19, claiming 370 lives. The Diocese of Cuernavaca, which serves Morelos, just to the south of Mexico City, reported damage to almost of all its churches.

In Puebla, 11 worshippers were killed in a collapsing church during the earthquake.

Much of the reconstruction will require working with the federal government, as many older churches in Mexico are considered national patrimony. This is partly the product of past prohibitions on the church owning property, regulations that were scrapped in 1992.

The bishops said such places of worship are pillars in local communities and support some local economies, especially where pilgrimages are popular.

“One of the great contributions of this inventory is to serve as a tool for establishing dialogue (with) various government entities, universities and other social and ecclesiastical organizations … all in favor of reconstructing these properties” and recovering “the livelihoods of many people,” the bishops said in a statement.