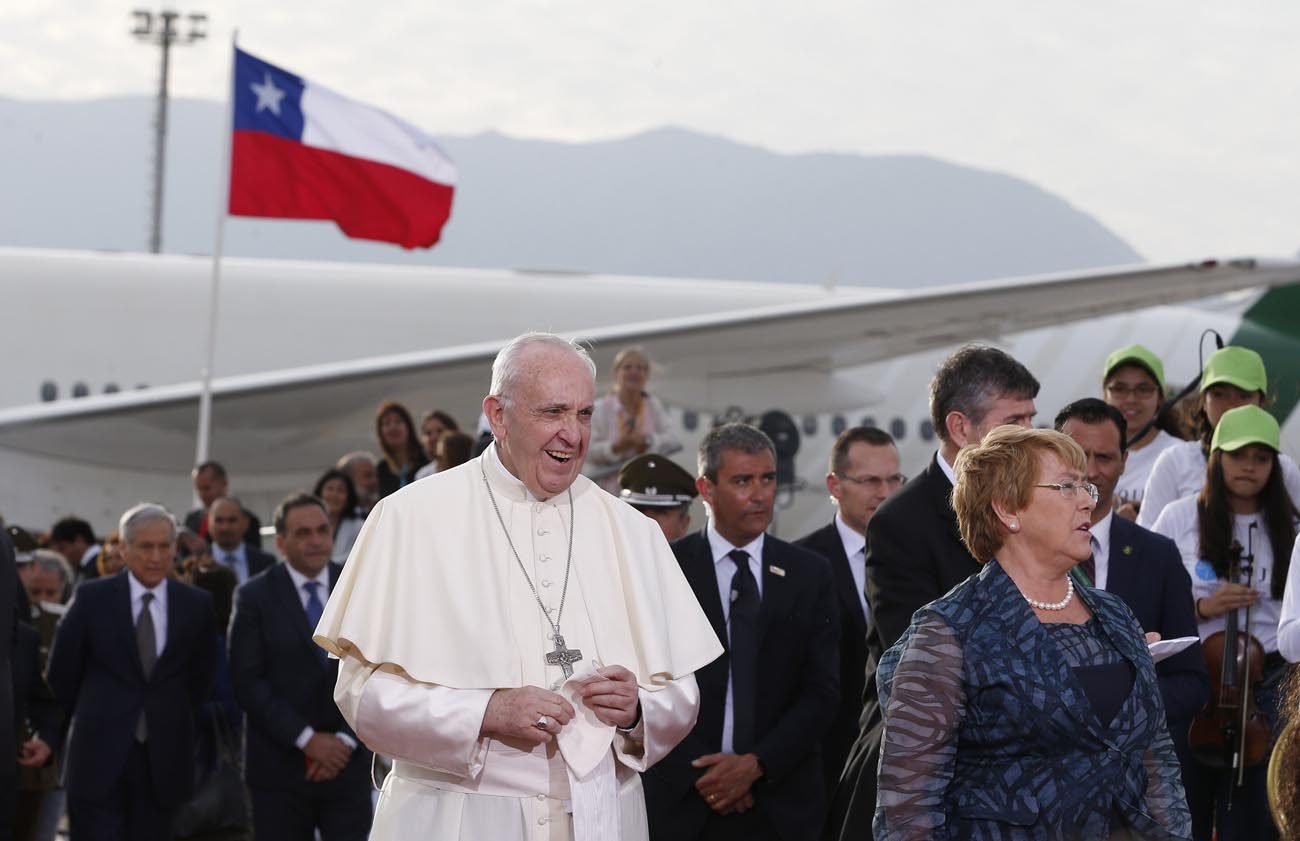 SANTIAGO, Chile (CNS) — Pope Francis arrived in Santiago, the first stop on a seven-day, six-city visit to Peru and Chile, where he will take his message of hope to people on the margins of society.

Arriving in Santiago after more than 15 hours in the air, Pope Francis was greeted by Chilean President Michelle Bachelet and a young Chilean girl. He told the crowd he was happy to be in Chile, and he blessed the workers at the airport before being transported to the papal nunciature, where he will stay the three nights he is in Chile.

On Jan. 17, the pope will travel to Temuco and meet with residents of the Mapuche indigenous community. Members of the Mapuche have called for the government to return lands confiscated prior to the country’s return to democracy in the late 1980s.

“Chile won’t be too difficult for me because I studied there for a year and I have many friends there and I know it well, or rather, well enough. Peru, however, I know less. I have gone maybe two, three times for conferences and meetings,” the pope told journalists aboard the papal flight.

There was no mention of increased security for the Chilean visit. Three days earlier, several Chilean churches were firebombed, and police found other, unexploded devices at two other churches in Santiago. Some of the pamphlets included the phrase, “The next bombs will be in your cassock” and spoke of the Mapuche cause.

Before flying to Peru Jan. 18, Pope Francis will visit Iquique, where he will celebrate Mass on Lobito beach.

In Peru Jan. 18-21, will visit Lima, Puerto Maldonado and Trujillo.

He will also meet with the indigenous people of the Amazon during his visit to Puerto Maldonado. The Amazon rainforest includes territory belonging to nine countries in South America and has experienced significant deforestation, negatively impacting the indigenous populations in the area and leading to a loss of biodiversity.

In both countries, he will work to restore trust and encourage healing after scandals left many wounded and angry at the Catholic Church.

Shortly after take-off from Rome, Greg Burke, Vatican spokesman, distributed a photo card the pope wished to share with journalists aboard his flight from Rome.

The photo depicted a young Japanese boy shortly after the bombing in Nagasaki, waiting in line, carrying his dead baby brother on his back to the crematorium. On the back of the card, the words “The fruit of war” were written along with Pope Francis’ signature.

Before greeting each of the 70 journalists, the pope said that he found the photo “by chance” and “was very moved when I saw this.”

“I could only write ‘the fruit of war.’ I wanted to print it and give it to you because such an image is more moving than a thousand words,” he said.

Responding to a journalist’s question about nuclear war, Pope Francis said: “I think we are at the very limit. I am really afraid of this. One accident is enough to precipitate things.”

The Peru-Chile trip is Pope Francis’ fourth to South America. In July 2013, he visited Brazil for World Youth Day. In July 2015, he traveled to Ecuador, Bolivia and Paraguay. His trip to Colombia in September was his third visit to the continent as pope.

Contributing to this story was Jane Chambers in Santiago.

NEXT: Pope Francis flies over Argentina, sparking questions of when he’ll visit