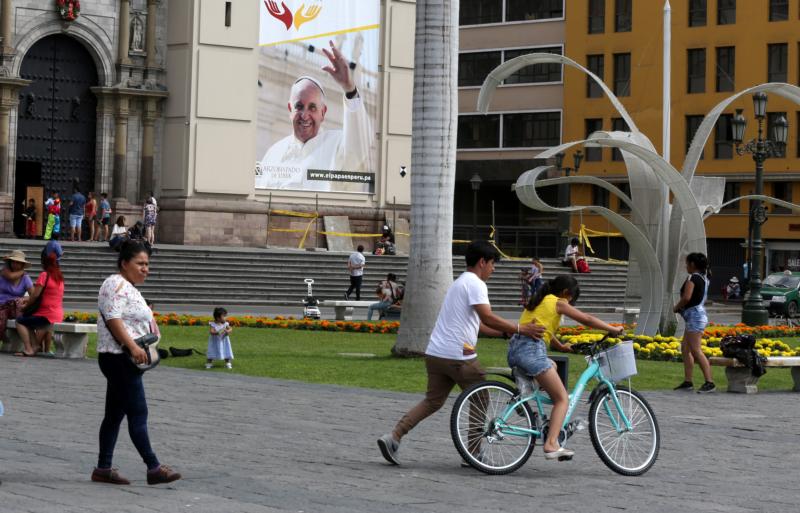 People walk near a banner with an image of Pope Francis on the facade of the cathedral in Lima, Peru, Jan. 3. On Jan. 15, Pope Francis will begin a six-day visit to Chile and Peru. (CNS photo/Mariana Bazo, Reuters)

The following is the schedule for the pope’s trip as updated Dec. 11 by the Vatican. Times listed are local, with Eastern Standard Time in parenthesis when it is different from local time:

— 9 a.m. (7 a.m.) Courtesy visit to Michelle Bachelet, president of the republic, at the presidential palace.

— 5:15 p.m. (3:15 p.m.) Meeting with priests, men and women religious, seminarians and novices at the cathedral of Santiago. Speech by pope.

— 7 p.m. (5 p.m.) Visit to the Pontifical Catholic University of Chile. Speech by pope.

— 11:30 a.m. Meeting with the people at the Jorge Basadre Institute. Greeting by pope.

— 1:15 p.m. Lunch with representatives of people of the Amazon at the Apaktone Pastoral Center.

— 4:45 p.m. Meeting with government authorities, members of civil society and the diplomatic corps in the courtyard of the presidential palace. Speech by pope.

— 5:15 p.m. Courtesy visit to Pedro Pablo Kuczynski, president of the republic, in the Ambassadors Room of the presidential palace.

— 12:15 p.m. Tour of the Buenos Aires neighborhood in popemobile.

— 4:45 p.m. Marian celebration of Our Lady of La Puerta at Plaza de Armas. Speech by pope.

— 9:15 a.m. Mid-morning prayer with contemplative nuns at the Shrine of Our Lord of the Miracles. Homily by pope.

— 10:30 a.m. Prayer before the relics of Peruvian saints in the city’s cathedral.

— 10:50 a.m. Meeting with Peru’s bishops in the archbishop’s residence. Speech by pope.

— Noon. Recitation of the Angelus at Plaza de Armas.

PREVIOUS: Postulator: Religious killed in Algeria will be recognized as martyrs

NEXT: Pope to teachers: Help kids live with care for all of creation