At De La Salle Vocational, lives are turned around with graduation tassels 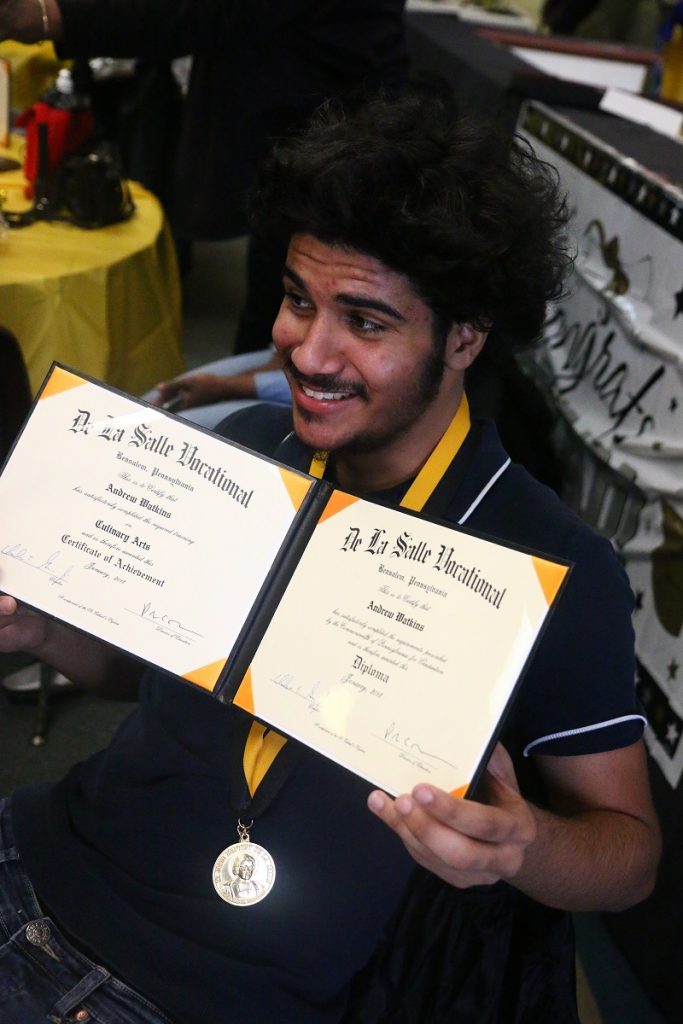 With the turn of a graduation tassel, 25 young men recently turned a corner in their lives.

The youths were awarded their high school diplomas in a Jan. 26 graduation ceremony at De La Salle Vocational, the day treatment center of the St. Gabriel’s System in the Archdiocese of Philadelphia. A division of Catholic Social Services, the system offers educational, vocational and behavioral support to adjudicated young men aged 16 to 18.

For many, the journey to the podium has been a difficult but rewarding one, as salutatorian Nicholas Moseley noted.

“I was a troubled kid,” he said in his address. “But today proves that we are not troubled anymore, and shows us that we can conquer the challenges that are set in our path.”

Now certified in auto services, Moseley has shared his story with students at area Catholic schools, and with cadets at the Philadelphia Police Academy.

“I probably wouldn’t be the young man I am today if I hadn’t attended this program,” he said. “I was able to turn around the previous decisions I’d made.”

Kimberly Kramer, a social service worker at De La Salle Vocational, said that the greatest challenge for students is learning to trust the staff.

(Watch a video of the De La Salle Vocational graduation:)

“When they first come here, a lot of the kids think that we’re a set-up to get them locked up,” she said. “But when they realize we’re here to help, they begin to open up and build a relationship with us.”

That outreach is inspired by the school’s namesake, St. John Baptist de La Salle, a 17th-century French priest who founded the Christian Brothers, an order dedicated exclusively to education.

La Salle, the patron saint of teachers, developed schools that integrated religious and secular instruction, while involving parents in the educational process.

After a three-year course of study, Candace Ford was proud to watch her son Tajmir accept his diploma, which included a certification in building maintenance. 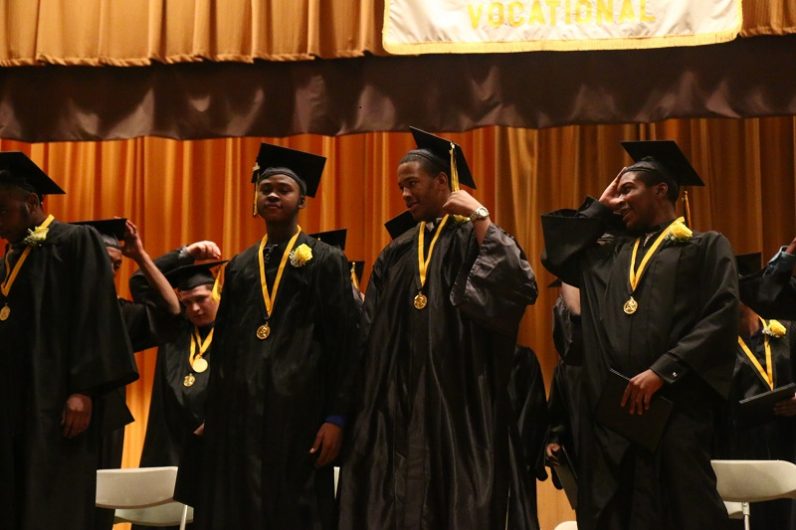 “That’s my baby,” she said. “I’d like him to continue his education with additional tech school training.”

Steven Parker, an auto body instructor, advises graduates to apply what they’ve learned at De La Salle to more advanced coursework, and to life itself.

“It’s not just working on cars or buildings,” he said. “It’s having a good work ethic, and being a good person.”

Fudjr Mitchell, a culinary arts graduate, has already secured an internship at the Kind Institute, an urban education program in the Point Breeze section of Philadelphia.

Mitchell, who is set to enroll in Community College of Philadelphia, ultimately plans to open restaurant and clothing store chains.

“I’m a ‘lifestyle entrepreneur,’” he said. “I’m fascinated with a number of subjects; I can’t limit myself to just one project.”

“Remember what you accomplished here,” he said. “You are today and will be forever capable, competent, skilled individuals, able to do whatever you set your mind to achieving.”

NEXT: Couple clears up misconceptions on Natural Family Planning