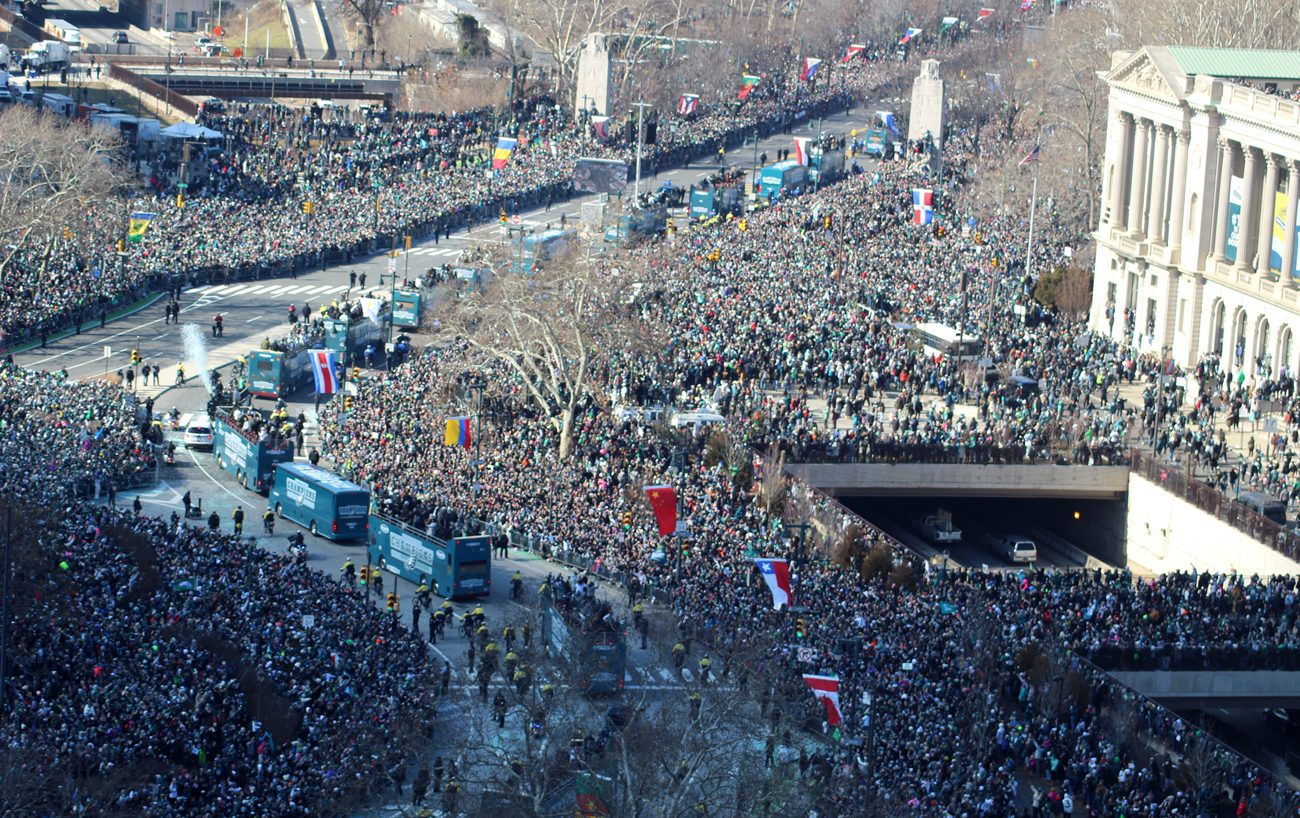 Some of the dozen open-air buses carrying Philadelphia Eagles players, coaches and officials wind through Logan Square in Philadelphia and some of the approximately 2 million Eagles fans at a parade and victory rally Feb. 8. (Photo by Matthew Gambino)

Faithful fans of the Philadelphia Eagles, who captured their first Super Bowl championship Feb. 4, also captured the hearts of up to 2 million people who packed the rowhome-lined streets and grand boulevards of this city for a parade under a bright, cloudless sky Thursday, Feb. 8.

(See our photo gallery with 28 images from the day here.)

In a cathartic outpouring of passion borne from generations of coming oh-so-close but no further, parents and grandparents, children and teens, friends and strangers from every walk of life danced and sang together the Eagles fight song all morning.

The parade of more than a dozen open-air buses started on a five-mile-long route around 11 a.m. in South Philadelphia, past City Hall and by mid afternoon ended at the Philadelphia Museum of Art for a massive victory rally.

Along the way players and coaches, led by Eagles owner Jeffrey Lurie and head coach Doug Pederson, held the silver Lombardi Trophy for the NFL championship high in the gleaming sunshine amidst the rolling, deafening roars of the crowds that lined along the route.

They had started out for center city as early as 3 a.m. from their homes by train, bus or car to stream into the city from its neighborhoods, its suburbs and states near and far. 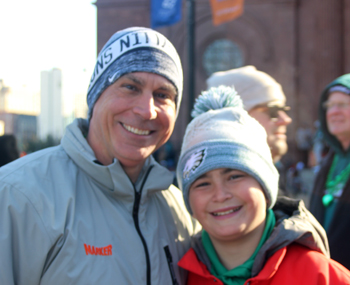 Mark McKarra (left), a former Delaware County resident, drove up to Philadelphia from South Carolina with his son, Jacob, for the parade.

One of those travelers from out of state was Bernie McKarra, 48, and his son Jacob, 11, from Christ Our King Parish in Mt. Pleasant, South Carolina, Diocese of Charleston, who drove 11 hours to the parade in Philadelphia.

Brian, formerly a resident of Ridley, Delaware County, and a member of Our Lady of Perpetual Help Parish, Morton, is the center of a generational devotion to the Eagles. It was a common tale for many, if not most of the parade goers.

“My dad died about eight years ago. He’s looking down and smiling now,” said McKarra. When his beloved Eagles wound down Super Bowl LII for the 41-33 win over the New England Patriots, “We were all thinking, ‘Finally!’ It was cool.”

McKarra said he watched the game with friends and family at his home, joined by friends from the Philadelphia area who, like him, are also transplants to South Carolina. 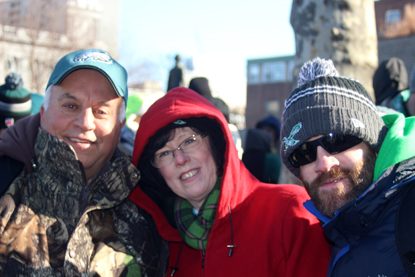 Mark Marine (left), a member of St. Matthew Parish in Conshohocken, enjoys the parade with his wife and son.

Closer to Philadelphia and making the trek into the parade was Mark Marine, a resident of Conshohocken and member of St. Matthew Parish, who came with his wife and son.

“I have relatives in Boston and we go back and forth. They torment me,” he said hours before the start of the parade. “Now it’s my turn. It was a lot of fun on Sunday.”

A longtime season-ticket holder when the Eagles played at Veterans Stadium from 1971 through 2003, and a patron of the infamous 700 level, Marine recalled decades of Eagles’ memories that he is passing down to his son Mark Jr.

Chief among them was the 1980 NFC championship game against the archrival Dallas Cowboys, leading to the Eagles’ first Super Bowl appearance in 1981.

Played in single-digit temperatures and resulting in a 20-7 win, Marine best remembers the tailgate party of that day.

Most of the crowd at the parade consisted of young adults and teens, owing to the high-decibel roar rising up hours before the parade as Jumbotron televisions replayed the Super Bowl game to cheers during the biggest plays. They’d already seen those unforgettable moments but gleefully relived them with newfound friends. 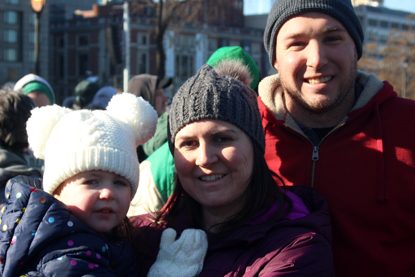 The Fedorowicz family — from left, Cassidy, Lindsey and Joe — came from Harleysville and Corpus Christi Parish for the parade.

Joe and Lindsey Federowicz had watched the game Sunday night nervously with their 3-year-old daughter Cassidy, whom they’d brought well bundled to the parade from their home in Harleysville and Corpus Christi Parish.

Amid the excitement and press of the crowds from their vantage point around Logan Circle, the family remembered the tension of one of the most exciting Super Bowl games ever.

“There wasn’t a moment” during the taut game when Joe could feel confident the Eagles would win, he said, “not until the clock read zero.”

But they did win, as improbable as it may have seemed in the beginning of the 2017 season.

This 16-3 campaign capped by its first-ever Super Bowl championship for the 85-year-old franchise had ended, blessedly, with a parade that drew folks from all walks of life. They took trains, buses, cars and even, in the case of Renee Badeau of North Philadelphia, a walk down Broad Street from her home with her father, sister and niece. 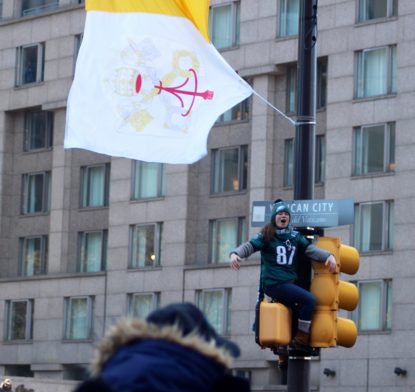 A young woman gets a prime viewing spot atop of traffic signal adorned with the flag of the Holy See. The flags of all countries line the Benjamin Franklin Parkway, one of two major routes for the Philadelphia Eagles’ Super Bowl victory parade Feb. 8 in Philadelphia.

And what a scene they found. Observers said the parade and ending victory rally may have been unprecedented among American cities in its size, outpouring of emotion and by its end, an apparent absence of bad actors. Loud voices made hoarse became united in song, especially for a 2 million-strong rendition of “We Are the Champions.”

The sustained passion was punctuated by explosions of joy as team leaders spoke to the crowds who in turn showed gratitude and joy as thick as a lineman.

The parade would be an indelible memory that, for those who believe year after year, generation after generation, dreams do come true. They’re made yet sweeter for the wait.

The proud, long-devoted fans will savor the moment not only on this winter’s day, but doubtless for all their days forward. 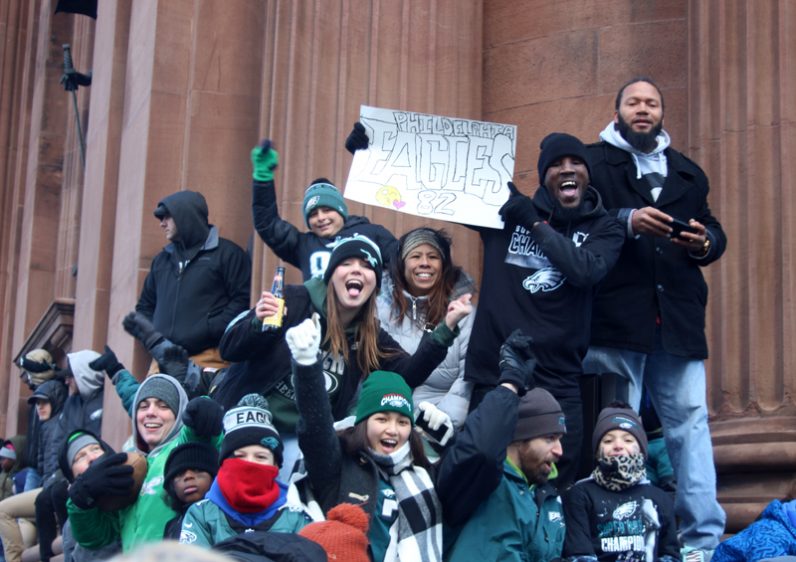 Crowds enjoying the Feb. 8 parade were boisterous but good natured, especially on the steps of the Cathedral Basilica of SS. Peter and Paul, which overlooked the parade route on Logan Circle.

PREVIOUS: CRS Rice Bowl offers way to help the hungry near and far

NEXT: At De La Salle Vocational, lives are turned around with graduation tassels