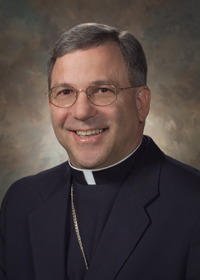 SAGINAW, Mich. (CNA/EWTN News) — Bishop Joseph Cistone of Saginaw, Michigan has asked for prayers and some leeway in his schedule following a recent lung cancer diagnosis.

In a letter to his priests and diocesan leaders yesterday, Bishop Cistone said his diagnosis came after a series of tests, following a persistent cough and labored breathing which “persisted since September.”

“Over the past two months, I have undergone a series of tests and have now learned that I have lung cancer,“ he said. “The good news is that, since I have never been a smoker, it is a form of lung cancer which is treatable and potentially curable.”

Bishop Cistone is the sixth bishop of the Saginaw Diocese, and was appointed there in 2009 by Pope Benedict XVI. A native of Philadelphia, he was ordained a priest for the Archdiocese of Philadelphia in 1975, where he also served as auxiliary bishop from 2004-2009.

Due to a six-week treatment plan including chemotherapy and radiation, Cistone said that he may need to step aside from certain scheduled events, but that he planned to maintain his administrative responsibilities and involvement in pastoral concerns “to the best of my ability.”

Cistone said that he was told by his doctors that he will experience relief of his symptoms within the first two weeks of his treatment plan, which is scheduled to be completed before Easter.

“With the grace of God, we will celebrate the Chrism Mass together with prayers of gratitude,” he said. “In the meantime, I ask for your prayers and those of your people, as I assure you of my prayers for you and those entrusted to your care.”