When Father John Babowitch received notice that he was definitively going to attend Sunday’s Super Bowl between the Philadelphia Eagles and New England Patriots in Minnesota, he was excited.

Well, more like very excited. Actually, he was thrilled. OK, he was beyond thrilled.

Few, if any, bleed more green than Father Babowitch. 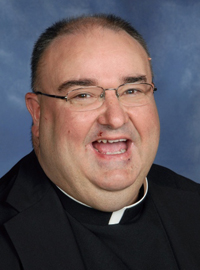 “You don’t get an opportunity like this,” said the pastor of Our Lady of Calvary Parish in Northeast Philadelphia. “It’s something that you don’t think will happen, so when it does, it takes a few minutes for it to sink in.”

Long story short, Father Kevin Mulligan, pastor at Flourtown’s St. Genevieve Parish, was gifted two tickets by a benefactor of Pope St. John XXIII Seminary in Weston, Massachusetts, where he studied before his ordination for the Philadelphia Archdiocese in 2015. Father Mulligan’s comrade of choice was a no-brainer.

“He was the first person I thought of,” said Father Mulligan. “He’s an expert on all things Eagles. A huge, huge fan.”

When it comes to being a sports expert, Father Mulligan is no slouch himself. A 1973 graduate of since-closed Bishop Kenrick High School in Norristown who grew up in St. Helena Parish in Blue Bell, Father Mulligan conducted a long, successful career as a sportswriter.

While at the Philadelphia Daily News from 1982 through 2005, Father Mulligan eventually became the Eagles beat writer. He attended “five or six” Super Bowls, he recalls. Ultimately, Father Mulligan departed journalism for ministry.

This Eagles Patriots connection with the two men has happened before. While a seminarian in New England, Father Mulligan once had a pair of tickets to an Eagles-Patriots game that started at 4:15 p.m. Sunday afternoon. If Father Babowitch wanted to attend, he was invited.

Undaunted, Father Babowitch immediately accepted the offer. He drove six hours north, watched the Eagles shock the Patriots, and then immediately drove home through the night because he had a 6:30 a.m. Monday Mass to celebrate.

“When it comes to the Eagles,” Father Mulligan quipped, “the man apparently doesn’t need much sleep.”

Father Babowitch is a product of Visitation B.V.M. Parish in Philadelphia’s Kensington section and the since-closed North Catholic High School (Class of 1987). He was ordained in 1996 after studying at St. Charles Borromeo Seminary.

He has thoroughly reveled in the “happy” moods of Philadelphians since this amazing Eagles’ ride started gaining steam during the regular season and reached incalculable decibels during a surreal 38-7 win over the Minnesota Vikings in the NFC championship two weeks ago.

“I’m a Philly boy through and through,” Father Babowitch said. “The entire city is just so excited for this. You see it everywhere you go, people wearing Eagles’ shirts. You hear it on the radio. They love all their sports, but this is an Eagles’ town.

“Our parish is thrilled. The kids in our school, our parishioners, all of them are smiling and hoping for a Super Bowl win. If the Eagles can do it, imagine the happiness then.”

Always a faithful Philadelphian, Father Mulligan stopped being an Eagles’ fan per se early in his sports writing career, which is common when a person’s employment is tied to an organization that you watch day in and day out on a professional level.

This year’s edition of the Eagles, however, has inspired him. He will definitely be cheering for the Eagles to dethrone the perennial-champion Patriots inside Minnesota’s domed U.S. Bank Stadium.

He and Father Babowitch will fly out Saturday to Chicago, drive to Minnesota and stay overnight at a seminary in the Minneapolis/St. Paul Archdiocese.

“The team has grown on me,” Father Mulligan said. “It began with the character of some of the players they brought in, and there are also a few ‘characters’ that have livened this up and don’t take themselves too seriously. They’re easy to root for.”

Father Mulligan said sports teams have the capacity to create peace, mend disagreements and galvanize communities. He has talked about this with the St. Genevieve parishioners and student body.

“The unifying power of this is great,” he said. “We can learn so much from athletes in team settings. They start as strangers … draft picks … free agents. Then they become brothers.

“You saw it with the Phillies and Sixers in the 80s and the Eagles in 2004 and the Phillies in 2008 and the Eagles now. Even when teams are only in the playoffs, it brings people together. It’s visible. Different races, ethnicities, backgrounds. None of it matters. They are sharing an experience together as one.”

In the parish bulletin this week, Father Mulligan predicts the Birds will declaw the Pats, 24-21. A few miles away, Father Babowitch is portending a 24-17 Eagles victory.

If the Eagles triumph, Father Mulligan will be St. Gen’s most popular person because he promised the school a “pastor’s holiday” to commemorate what would literally be a historical event.

Father Babowitch did one better, asking the school what day they would appreciate having off regardless of a victory. They chose Monday.

With more than a million fans desirous of attending a parade on Tuesday or Wednesday, maybe the archdiocese will follow suit and declare a celebratory respite for its workers.

Father Babowitch would undoubtedly attend that parade, same as Father Mulligan. To anyone who wants to listen, they would have quite a story to tell. A story that supersedes winning or losing. A story that defies logic.

A story for the ages.

Father John Babowitch (second from right) stands with students and staff of Our Lady of Calvary Parish in Northeast Philadelphia, enjoying a moment he and a million other residents have waited a long time to witness: the Philadelphia Eagles are aiming to win their first Super Bowl on Sunday, Feb. 4.