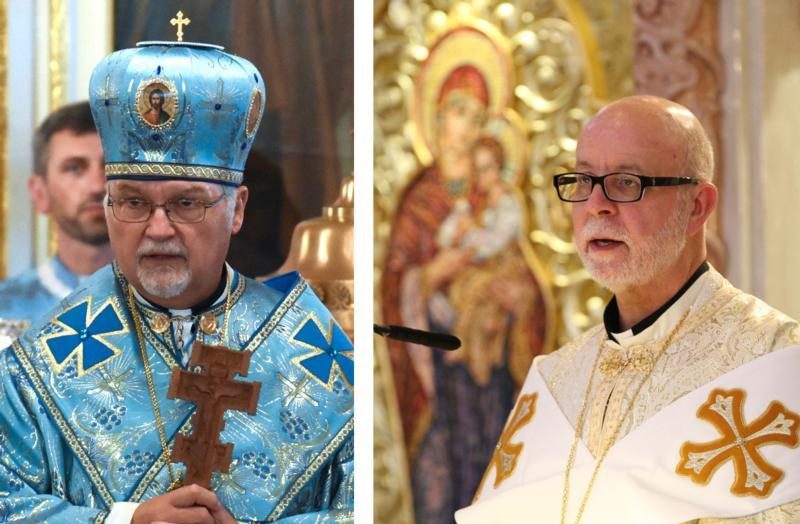 Archbishop Stefan Soroka of Philadelphia, metropolitan of U.S. Ukrainian Catholics, and Bishop Paul P. Chomnycky of Stamford, Conn., are pictured in a composite photo. The two Ukrainian Catholic prelates have placed a culinary wager on the outcome of the Feb. 4 Super Bowl LII in Minneapolis. (CNS photos/Jacqueline Dorme, Republican-Herald and Gregory A. Shemitz)

PHILADELPHIA (CNS) — Two Ukrainian Catholic prelates have placed a culinary wager on the outcome of the Feb. 4 Super Bowl LII in Minneapolis.

According to the owners of the Parker House Hotel in Boston, the Boston cream pie was first created at the hotel by an Armenian-French chef, M. Sanzian, in 1856 and originally called a chocolate cream pie. While other custard cakes may have existed at the time, baking chocolate as a coating was a new process, making it unique and a popular choice on the menu.

The name “Boston cream pie” first appeared in the 1872 Methodist Almanac was declared the official dessert of Massachusetts Dec. 12,1996.

While both bishops are rooting for their respective home teams, they said they see the big game as an American tradition that brings the nation together on Super Bowl Sunday.

“It is amazing how on this one Sunday, people throughout the nation, indeed throughout the world, come together to watch a game played by grown men. Families, neighbors and organizations have parties and socials to enjoy this American classic. It is a unifying event,” Archbishop Soroka said.

Bishop Chomnycky commented, “While we all hope for an exciting and competitive football game on Sunday, we also look forward to good sportsmanship and camaraderie among the players and fans both on and off the field. For a few hours, we are able to forget about the many problems throughout the world.”