Chaldean archbishop: Time to be ‘honest’ in dialogue with Muslims 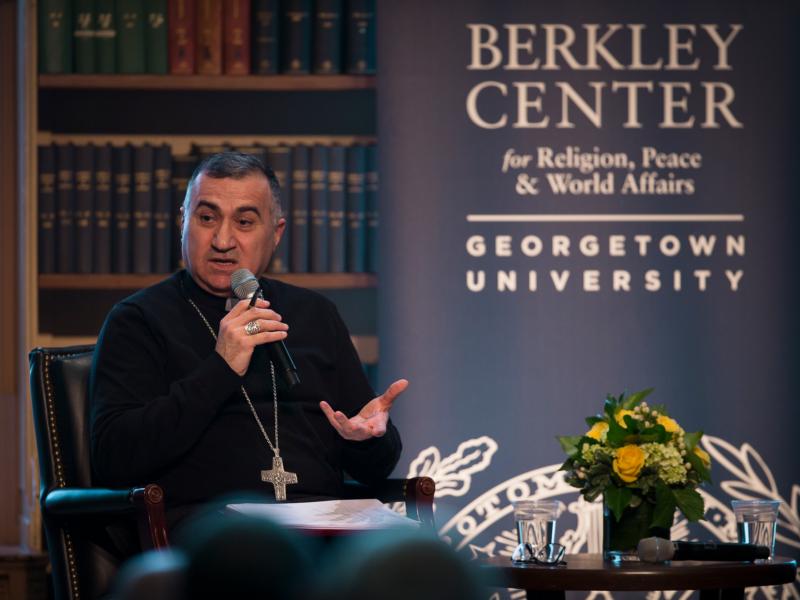 WASHINGTON (CNS) — If Christians in the Middle East are going to be “honest” with their Muslim dialogue partners, said Chaldean Archbishop Bashar Warda of Irbil, Iraq, Muslims will have to acknowledge that the persecution of Christians in the region did not start with the Islamic State’s rise to power in 2014.

“We experienced this not for the last four years, but 1,400 years,” Archbishop Warda said during a Feb. 15 speech at Georgetown University in Washington, sponsored by the Religious Freedom Research Project of the university’s Berkley Center for Religion, Peace & World Affairs.

Christians are partly to blame, too, in the dialogue, according to Archbishop Warda. “We did not push back against the recurring periods of terrorism that inflicted cruel pain upon our ancestors,” he said. He added that Christianity also needs to return to a “pre-Constantine vision” of the church, recalling Jesus’ words shortly before his crucifixion: “My kingdom is not of this world.”

Given the scope of the Islamic State’s campaign to erase Christians and all non-Muslims from the territories it had controlled prior to a counteroffensive that decimated its ranks and holdings, “there is nothing left but to speak plainly,” he said. “When there is nothing left to lose, it is very liberating.”

Archbishop Warda added, “We object that one faith has now the right to kill another. There needs to be a change and a correction within Islam.”

He said the typical Muslim response to Islamic State’s atrocities — declared genocide by the U.S. Department of State in 2016 — falls along the line of “ISIS does not represent Islam,” but rarely goes further, with no acknowledgment of past mistreatment of Christians or an expression of remorse for them.

“In the Middle East, we have moved from fear to terror to horror,” he said. “Where next? … Hundreds of thousands of innocent people have died.”

He noted, “We have been hearing courageous words from some Islamic leaders. It should be encouraged,” although he cautioned, “we should not be passive, or simply pray for the best.”

With about $3 million donated by Italian Catholics, Archbishop Warda started the Catholic University of Irbil in 2015. It has 82 students, including four Muslims, in undergraduate degree programs in the arts and sciences. While there are other Catholic colleges in the Middle East, he said he thought it was important that this school have the name “Catholic” in its title.

The wait for reconstruction money continues. Archbishop Warda said the money is needed now, but governments just continue to “talk” rather than distribute funds. He took note of a March 14-15 conference in the region sponsored by the U.S. Agency for International Development. “They will probably just talk more” then, he added. “Maybe by late 2020” will the region finally see the promised funds, he guessed aloud.

“Your policy assessments have life-or-death consequences,” the archbishop said, asking for material support and not charitable aid. “Help us develop sustainable ways of life and income in Iraq,” he added, with the most critical needs being education and health.

For the estimated 200,000 or so Christians remaining in Iraq — down from about 1.5 million in 2003, when the United States launched the Iraq War — “ours is a missionary role, to give a witness to the truth of Christ,” Archbishop Warda said. “I am not speaking of conversion. I am speaking of the fundamental truth … that we can show in a moment of unique clarity.”

Archbishop Warda said, “So many of our people have fled, and so few of us are left,” but he added he does not begrudge families for making the decision to live elsewhere permanently for their safety or that of their children. “While it is true that our numbers are small, the number of Apostles were also small.”