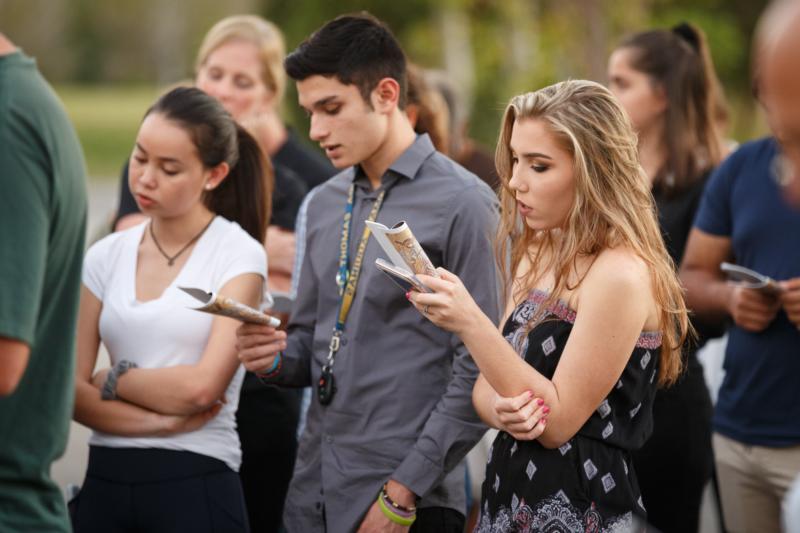 Parishioners of Mary Help of Christians Church in Parkland, Fla., pray during an outdoor Stations of the Cross service Feb. 16 dedicated to the victims and survivors of the deadly mass shooting at nearby Marjory Stoneman Douglas High School. At least 17 people were killed when 19-year-old former student Nikolas Cruz stormed the school with an AR-15 semi-atomic style weapon. At least one member of the parish was among those killed, according to the parish administrator. (CNS photo/Tom Tracy)

PARKLAND, Fla. (CNS) — A parish community less than two miles away and directly impacted by the Feb. 14 school shooting at a Broward County high school is finding new purpose in Lent this year, according to the parish administrator.

“We decided to hold Stations of the Cross on Fridays during Lent as is our tradition but this (past) Friday we decided to celebrate those stations in memory and in solidarity with those who died and all their families, and those at school who experienced this violence on Wednesday,” said Polish-born Father Ireneusz Ekiert, who became administrator of Mary Help of Christians Parish in December.

At least one member of the suburban parish northwest of Fort Lauderdale — 14-year-old freshman Gina Montalto, 14, who had attended Mary Help of Christians Elementary School — was among the deceased. Her funeral is set for Feb. 20.

“We have a couple of families with kids who were wounded and one that has died,” the priest told the Florida Catholic, newspaper of the Miami Archdiocese. “This was a perfect opportunity to bring all those who died, and their families, those who suffered, all those who experienced that violence to bring them into prayer in the Stations today.”

Troubled 19-year-old Nikolas Cruz has been charged with 17 counts of first-degree premeditated murder after stalking the halls of Marjory Stoneman Douglas High School with an AR-15 rifle on Valentine’s Day. Fourteen more faculty and students were injured in the tragedy. Cruz had reportedly been expelled from the school for disciplinary reasons.

Father Ekiert said several kids from the parish who attend the high school “were also traumatized by the whole experience. We talked with them on Wednesday and again yesterday and they are scared, they don’t know what to do with it.” 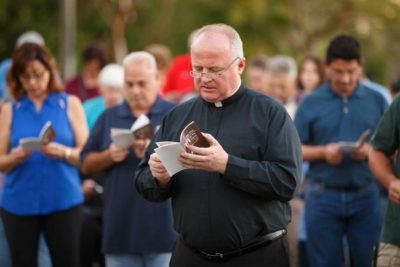 Father Ireneusz Ekiert, administrator of Mary Help of Christians Church in Parkland, Fla., leads parishioners during an outdoor Stations of the Cross service Feb. 16 dedicated to the victims and survivors of the deadly mass shooting at nearby Marjory Stoneman Douglas High School. (CNS photo/Tom Tracy)

Some 75 parishioners were on hand for the Stations of the Cross, including members of the parish youth group, local public high school students and students from the parish school. The parish another prayer vigil the night before and invited parishioners and others to pray the rosary at noon, 2, 4 and 6 p.m. the day after the shooting.

Father Ekiert said he never imagined being plunged into a horrific tragedy of this scope, especially in an otherwise quiet residential area that has become home to many South American transplants.

“Unfortunately, this event is very painful, very heartbreaking,” he said, “but people are coming together to pray. They were here on Ash Wednesday services in good numbers and yesterday we prayed the rosary all day every two hours for the victims and students.”

He added that the community will pray again this Sunday “for those who lost their lives or were affected by this violence.”

Local Catholic Charities counselors and others also were on hand to speak to student survivors. 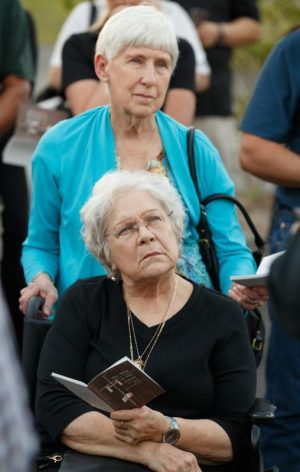 Parishioners of Mary Help of Christians Church in Parkland, Fla., pray during an outdoor Stations of the Cross service Feb. 16. (CNS photo/Tom Tracy)

“The kids in school and their parents were traumatized because students were locked in school for three and four hours and so yesterday and today we were trying to reach out to (parish and parochial school) families,” Father Ekiert said. “Thursday was difficult for everybody, but (our families) know that we are here for them and they know the school is a safe place.”

On the afternoon of Feb. 14, Cruz allegedly went on the shooting rampage shortly before school was to let out for the day. He was apprehended about an hour after shots were reported at the school. Although he has confessed to the shooting, details about his motive are still being pieced together.

Among the dead was Marjory Stoneman Douglas High School’s athletic director, Chris Hixon, a parishioner at Nativity Church in Hollywood; and another 14-year-old, Cara Loughran, who took part in the youth group at St. Elizabeth Ann Seton Church in nearby Coral Springs.