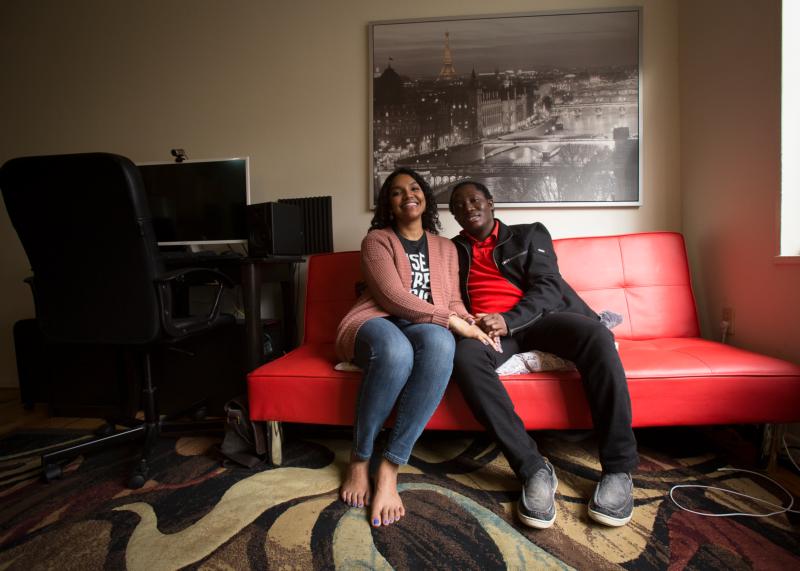 Sadhana Singh and My Ford Noel pose for a photo in their apartment in Washington Jan. 13. Singh is a recipient of the Deferred Action for Childhood Arrivals program and Noel is living in the U.S. under Temporary Protected Status. Both remain optimistic about their future, even though the Trump administration has ended DACA, asking Congress to continue it, and also ended TPS for select countries. (CNS photo/Tyler Orsburn)

WASHINGTON (CNS) — Love has its ways. And so does Facebook.

Both received scholarships from TheDream.US, and both now face uncertain futures.

Singh is a recipient of the Deferred Action for Childhood Arrivals program, or DACA, and her permit under the program expires this October. Noel, a Haitian, has Temporary Protected Status that ends in July 2019.

“We don’t want our lives to be just defined by this,” said Singh, sitting next to Noel on their Valentine-red couch in their small apartment. “Beyond our status we’re planning for a future. And together we can do that no matter where we are.”

With three associate degrees and a bachelor’s in supply chain management, Noel said they are considering a move to Canada.

“We may talk about the future, but we tend to wait until we are very happy because sometimes there’s a lot of (political) uncertainty,” he told Catholic News Service. “The last thing you want to do is talk about things while you’re upset and things are going wrong, and then you have that bad view of the future and you’re scared.”

The current anti-immigrant atmosphere in this country doesn’t seem to leave much room, or time, for the pursuit of happiness.

Contributing to this atmosphere was a comment attributed to President Donald Trump in questioning why the U.S. would accept more immigrants from Haiti and “(expletive) countries” during a meeting on immigration that touched on TPS immigrants from Haiti, El Salvador and some African nations.

“This administration sort of made America a little bit hostile at least mentally,” Singh said, noting an increase in internet aggression directed at immigrants.

“It’s very humiliating,” Noel added about the rhetoric online. “I knew it was there, but it (used to be) below the surface. Now that the president has been outspoken with his anti-immigration rhetoric, he encourages other people that normally wouldn’t say things to come out and say very nasty things that breaks somebody’s spirit.”

Singh said her parents brought her to the United States from Guyana because of economic hardship. She was an eighth-grader with a Creole accent living in suburban Atlanta, and had to manage her parents’ checkbook, utilities and phone calls because of their language barrier. She obtained DACA status seven years after graduating from high school.

Three years after moving to Washington to pursue a degree in communications with an international affair minor, Catholic-run Trinity Washington University awarded her the St. Catherine Medal for her leadership on campus, “Dreamers” activism, six internships and 3.95 GPA.

In September, President Trump announced that he would end DACA this March and he also called on Congress to come up with a legislative solution to keep the program in place. Many are urging members of Congress to pass the Development, Relief and Education for Alien Minors Act, or DREAM Act, which has long been proposed and which gives DACA recipients the “Dreamer” name.

Noel left Haiti an orphan. As a child, he endured the political unrest of the 1990s, and as a teenager, he survived the 2010 earthquake that left more than 220,000 people dead. He was granted TPS in Florida that same year.

In recent weeks, the administration has also announced it was ending TPS for several countries, including Haiti.

Before moving to Washington to be with Singh, he taught classes at Broward College in Fort Lauderdale, Florida, and had a small Segway business for tourists. He is currently an inventory logistics manager with Avis Budget and in his free time designs a new business model for online shopping.

Singh said she is fortunate to have Noel in her life. Together they support one another and problem-solve issues they’re familiar with. “I’ve dated Americans before, and you tell them stuff, but it’s very much cursory. It’s very much like ‘Oh, well.’ This is my situation and then you move on to something else,” she told CNS.

Both say finding love is not about papers or citizenship.

“We will triumph and continue to live as a great couple,” said Noel, looking into Singh’s eyes. “Our love will continue to grow stronger, with or without status.”

NEXT: Archbishop: Church’s Christian anthropology is basis for social teachings