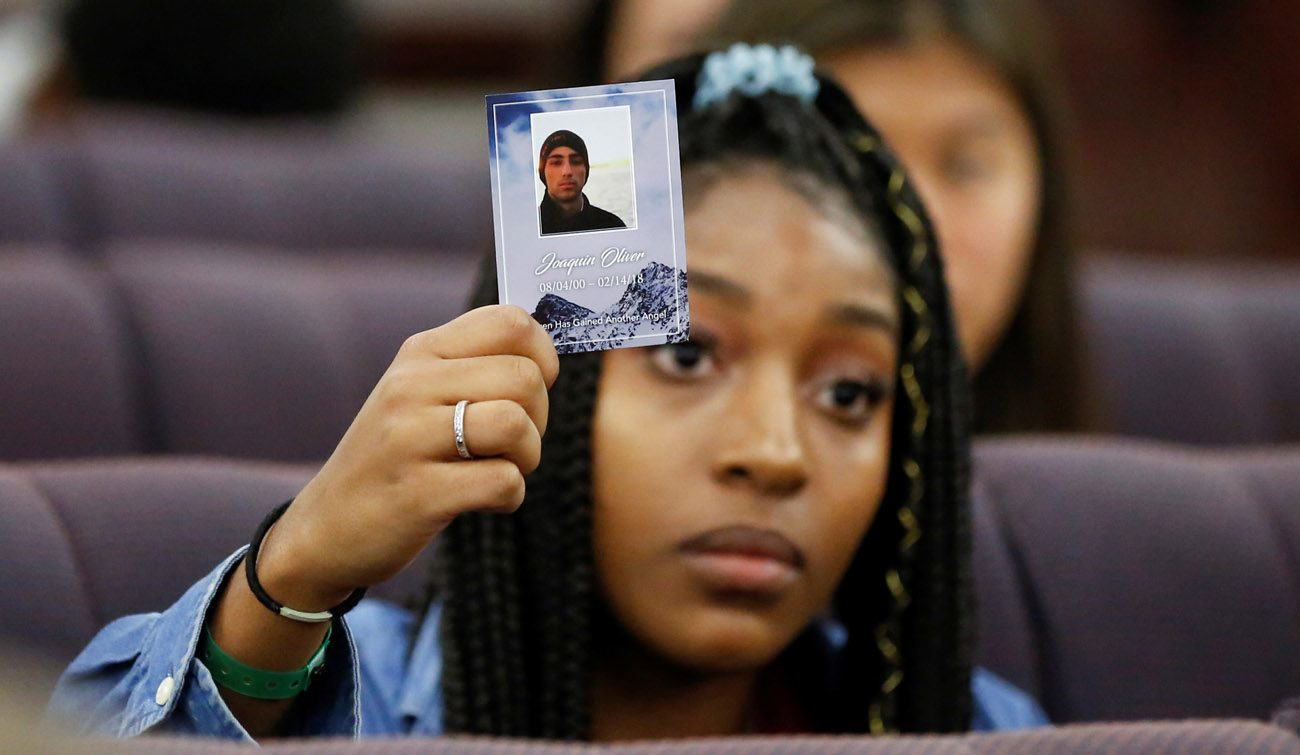 In this file photo, Tyra Hemans, a senior from Marjory Stoneman Dougla High School in Parkland, Fla., holds a photo of her friend Joaquin Oliver as she and other students speak with Florida state legislators Feb. 20 at the Capitol in Tallahassee. About 100 students from the Parkland school traveled in a three-bus caravan to demand gun restrictions a week after the deadly shooting that left 17 of their classmates and teachers dead. Oliver was one of the victims. (CNS photo/Colin Hackley, Reuters)

WASHINGTON (CNS) — The head of an organization representing Jesuit middle and high schools in the U.S. and Canada is calling for stricter gun legislation, following the Valentine’s Day mass shooting at a Florida high school that left 17 dead and many injured.

In a Feb. 21 letter addressed to U.S. President Donald Trump and to high-ranking members of Congress, Jesuit Father William Muller, executive director of Jesuit Schools Network of North America, said that those who survived the Feb. 14 shooting are “burdened now with the loss of classmates and peers senselessly murdered,” and said the Jesuit network stands “with so many voices against the proliferation of guns in our country.”

Authorities say the suspect in the shooting, Nikolas Cruz, a former student at the Florida high school, used an AR-15 semiautomatic rifle to gun down classmates and school officials.

“The deaths of innocent children and their teachers are the hardest to bear in this terrible trend of violence,” says Father Muller.

He points to a 2016 statement from the U.S. Conference of Catholic Bishops that calls on Congress to “require universal background checks for all gun purchases, limit civilian access to high-capacity weapons and ammunition magazines, make gun trafficking a federal crime and improve access to mental health care for those who may be prone to violence.”

The Jesuit network, along with the Catholic bishops and with the community of the Marjory Stoneham Douglas High School in Parkland, Florida, where the latest school shooting took place, declares support for laws to ban sales of assault weapons and high-capacity ammunition and for background checks on gun sales, Father Muller said.

“Columbine, Virginia Tech, Newton, Parkland — and others. They are the names of our shame as a nation,” he said. “We cannot risk another young life because of our inaction.”

PREVIOUS: Rev. Graham recalled for deep faith, his invitation to all to know Christ