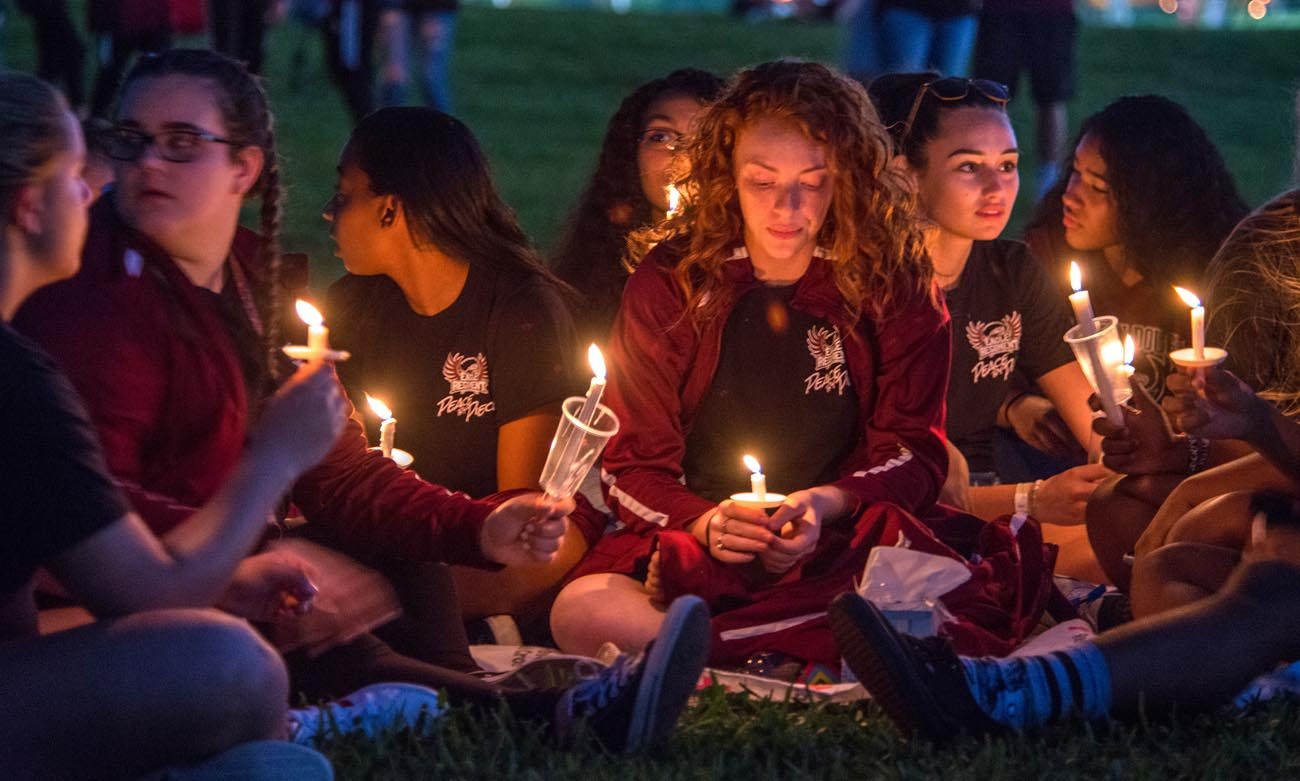 Students attend a candlelight prayer vigil Feb. 15 for the victims of a mass shooting at nearby Marjory Stoneman Douglas High School in Parkland, Fla. At least 17 people were killed in the Feb. 14 shooting. The suspect, 19-year-old former student Nikolas Cruz, is in custody. (CNS photo/Giorgio Vierea, EPA)

PARKLAND, Fla. (CNS) — The massacre at Marjory Stoneman Douglas High School in Parkland left all of America reeling, but at Mary Help of Christians Church and School, the pain and grief were especially palpable.

The church, school and preschool are less than a mile from the high school and on the afternoon of Feb. 14 — Ash Wednesday and Valentine’s Day combined — sirens blared and emergency vehicles sped by the Catholic school throughout the afternoon. The school was locked down for nearly three hours, and the next morning, the parish family learned that one of its own had been among the victims.

The mood at the preschool was somber as veteran teachers reminisced about one of their former students, Gina Montalto. They recalled a youngster with an infectious smile and an effervescent personality. As a freshman at Douglas, she had excelled as a member of the marching band’s winter guard, a precision flag and dance troupe.

Gina was being mourned as well in Parkland’s neighboring city of Coral Springs, where she had been a member of St. Elizabeth Ann Seton’s high school youth group. At an evening prayer service Feb. 18, parishioners said they would remember “her sweet smile and kind heart.”

They also mourned 14-year-old freshman Cara Loughran, who served as a peer minister in St. Elizabeth’s religious education program. Both Gina and Cara had received the sacrament of confirmation at the church last year.

Those who knew Cara said she always wore a bright smile and loved Irish dancing, weekends at the beach and time spent with her cousins. During that same Feb. 18 prayer service, parishioners remembered her as “a beautiful soul who will be dearly missed by all who knew her. She was truly an angel on earth.”

As plans were made at Mary Help of Christians for Gina’s Feb. 20 funeral, the parish also needed to address the pain felt by others in the community whose children and their friends had been terrorized and traumatized by the events, as well as their parents who had suddenly started feeling very vulnerable.

The parish moved swiftly: rosaries were being said every two hours Feb. 15, the day after the shooting. That same night, the parish held a bilingual prayer service, one of several religious vigils held throughout Parkland that night.

“Each of us has a connection to what happened” at Stoneman Douglas, music director Tadeo Castro told the attendees. “Even though we don’t know what to say, we do know what to do. Prayer is the only thing we do fantastically. The only other thing we have to do is be here. You are here and I am here. What else do we need?”

Acute pain and grief were being felt elsewhere in Broward County, too. In Hollywood, Nativity Parish learned of the death of longtime parishioner Christopher Hixon, Stoneman Douglas’ athletic director and wrestling coach. Hixon also had served as athletic director at Blanche Ely High in Pompano Beach and South Broward High in Hollywood.

Hixon was the son of a Broward wrestling coach and he loved coaching the sport himself. But when he was needed to step in elsewhere — as a volleyball coach at one school, an assistant soccer coach at another, he did what was needed for his students.

He was equally devoted as a husband and father, and had served honorably in the U.S. Navy and Navy Reserve. Accolades followed him throughout his career; his most recent honor was being named the 2017 Athletic Director of the Year for the Broward County Athletic Association.

In the days after the shooting, mourners have returned to Pine Trails Park where 17 lighted plastic angels stand as sentries at the Udine Amphitheater and 17 crosses invite reflection and prayers. On a table at the amphitheater covered with candles, flowers and teddy bears is a note left by a former middle school classmate of Gina Montalto:

“Gina: We were in Science Club together last year. You were one of the first to talk to me at Westglades (Middle School). You made me feel so worth it. And I never got to tell you. Thank you for being so sweet to me. You signed my yearbook. You told me to keep pursuing science and art. I promise that I always will. For you. I’ll never forget you, Gina. I’ll miss you. We all will.”

Thuma writes for the Florida Catholic, newspaper of the Archdiocese of Miami.

NEXT: Parkland students arrive in Florida capital to urge action on gun reform