‘Lean on each other,’ advises couple married 75 years 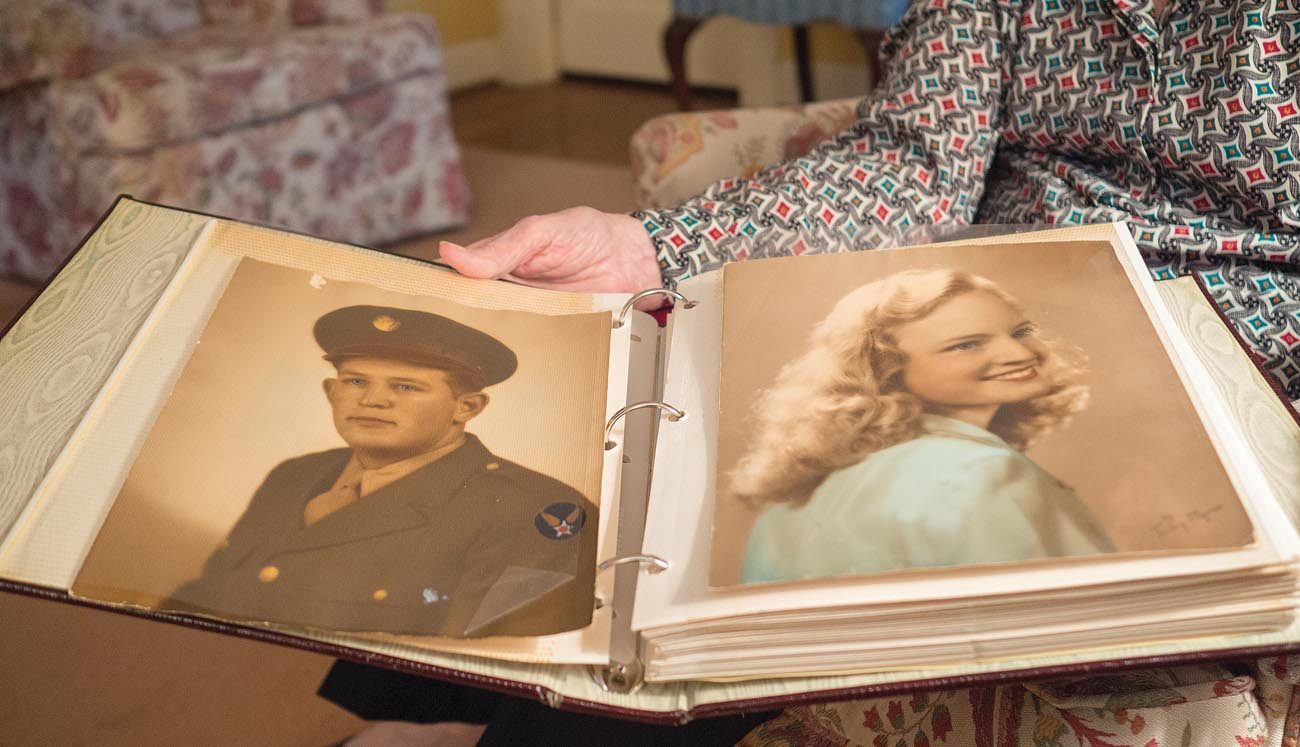 Ann Farr holds up portraits of her husband, Joseph, and herself at their home in Savannah, Ga. The photos were taken around the time they were married in 1943. (CNS photo/Jessica L. Marsala, Southern Cross)

SAVANNAH, Ga. (CNS) — Married for 75 years, Joseph Farr and his wife, Ann, say that they believe they’ve found the secret to making a marriage last.

They were married Jan. 3, 1943, at Sacred Heart Church in Savannah. Both were well under age 21 and barely alumni of Savannah High School — Ann completed the last three weeks of her senior year after her wedding. The couple doesn’t deny they have had, as Ann describes, an overdose of problems.

Between the two of them, they can account for more than 20 major surgeries and illnesses, the loss of their youngest daughter, Margaret, as well as a time away from each other in the early years of their marriage when Joe served as an aerial gunnery instructor in Europe during World War II.

Recounting that he heard about the birth of his first child, Joseph Jr., through his brother William’s affiliation with Gen. George Marshall, who was chief of staff of the United States Army at the time, Joe said that he even had to wait six months before he left the Army to could see his newborn son for the first time.

“When my son was born and I found out she (Ann) was all right and he was all right, that was really something,” Joe said of what he considers one of the most memorable moments of their marriage.

The silver lining in all of the Farrs’ hardships, however, have been further chances to solidify their partnership, one in which they each took turns being the breadwinner — Joe after he left the Army and Ann after their three children were already grown and Joe’s health problems made it difficult for him to continue working.

“The whole marriage has been one of working together, helping each other, and being ready to do it when the time arose,” Ann said, later explaining that in such a partnership, the love and respect increases with time.

Since her husband, who she described as being “loyal, strong, dependable and always there” was able to handle things at home when their roles reversed, Ann said she was able to work for a company that paid for her nightly college classes. She was then able to graduate with honors from then-Armstrong University at age 60.

“He’d have the most delicious meals ready for me,” Ann said, of coming home to entrees like her husband’s self-described “pretty damn good” vegetable beef soup. She added that she never did learn to cook as well as him, to which Joe humorously replied, “No, I don’t think you have.”

For the Farrs, mealtimes have also underscored their shared Catholic faith — which Joe, a former Baptist, adopted well into their marriage with the help of Father Tom Peyton, a former pastor of Sacred Heart Church in Savannah, who is now retired and in residence at the Cathedral of St. John the Baptist.

Ann, wearing a miraculous medal around her neck, talked about how the two of them say three prayers at meals: grace, followed by “Jesus be our guest” — something she learned from her mother — and finally ending with “Oh my God, we offer thee every act of today for thy great honor and glory.”

“He was going to Mass with me one morning, and Father Peyton looked at him and said, ‘When are you coming in?’ And so that was the invitation he kind of needed, the emphasis that brought him into the church,” Ann said, noting that her husband attended Mass with her even before he became a Catholic.

Ann also believes her resilience, strengthened by faith, inspired her husband, who later said that one of the things that makes her “something special” and “just pure wonderful” — aside from how beautiful it is when she tucks him in at night — are her high principles.

“I think you have to lean on each other, and that’s the big thing,” Joe said of finding strength in their marriage. “You help each other.”

Marsala is assistant to the editor of the Southern Cross, newspaper of the Diocese of Savannah.

PREVIOUS: Case on transfer of Archbishop Sheen’s body goes back to N.Y. court

NEXT: Archbishop calls for renewed focus on Rev. King’s call to nonviolence