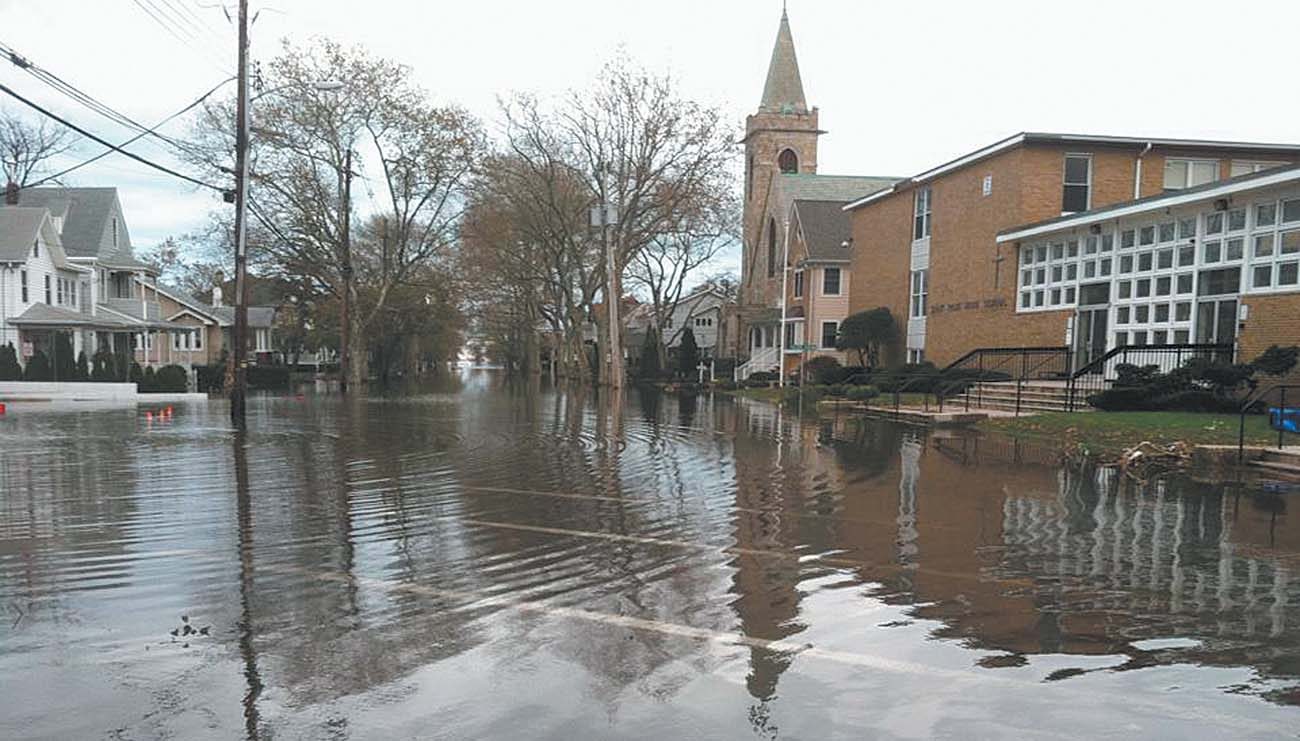 Floodwaters from Superstorm Sandy swamp the area around St. Rose Parish and its grammar and high schools in Belmar, N.J., during Superstorm Sandy in 2012. A change in Federal Emergency Management Agency policy may mean federal funds for religious organizations and houses of worship affected by hurricanes Harvey and Irma. (CNS photo/courtesy Ginny Blasi)

TRENTON, N.J. (CNS) — Superstorm Sandy-weary diocesan and parish officials lauded a Federal Emergency Management Agency policy change announced earlier this year that reverses a prior exclusion for religious organizations and houses of worship from applying for federal aid to recover from natural disasters.

“This change in eligibility for FEMA public assistance to religious organizations is monumental,” said Joe Cahill, director of the Diocese of Trenton’s Department of Risk Management.

Cahill’s comments came before the Feb. 9 passage of the Federal Disaster Assistance Nonprofit Fairness Act by Congress as part of the Bipartisan Budget Act. The bill, signed into law by President Donald Trump, codifies this change in FEMA policy.

The fairness provision directs FEMA to make disaster relief assistance available to houses of worship “on the same terms as other nonprofit entities,” said a statement released the same day by the U.S. Conference of Catholic Bishops, which had urged its passage.

These provisions ensure that houses of worship are treated fairly. That’s good not only for houses of worship but for the communities that depend on them,” added the statement issued jointly by Archbishop Joseph E. Kurtz of Louisville, Kentucky, chairman of the Committee for Religious Liberty, and Bishop Joseph C. Bambera of Scranton, Pennsylvania, chairman of the Committee on Ecumenical and Interreligious Affairs.

When it announced the policy change Jan. 2, FEMA attributed it to a 7-2 U.S. Supreme Court decision last June, which held that Trinity Lutheran Church in Missouri should not have been denied a public benefit just because it is a church.

In urging Congress to pass the Federal Disaster Assistance Nonprofit Fairness Act, the U.S. bishops and others also cited the Trinity Lutheran case.

Damage to Texas churches and Florida synagogues following hurricanes Harvey and Irma sparked additional legal challenges, as well as lawsuits filed against FEMA. In the fall, members of Congress — including Rep. Chris Smith, R-New Jersey — advocated for legislative changes to allow for disaster relief funding eligibility for houses of worship.

In an interview prior to the federal budget bill’s passage, Cahill said the ongoing debate over the funding has resonated across the Diocese of Trenton, particularly in areas affected by Superstorm Sandy.

“The memory of Sandy remains at the Diocese of Trenton,” Cahill told The Monitor, newspaper of The Trenton Diocese. “Many parishes on the barrier islands and other coastal areas have not fully recovered. Some homes remain abandoned or have been demolished.

“Parishioner count has declined in some locations as local economies suffered from the effects of the storm and (as) people moved away for reason of employment or available housing.”

“If FEMA assistance was available early on, it would have eased the cash flow burden on the Diocese and parishes,” Cahill said, “as the cost of emergency work in the early days after the storm was significant and could have covered a portion of the flood insurance deductible for a named storm.”

Under the prior review process, Cahill said that a religious organization would have to prove that assistance was for flood damage to buildings that were not religious in nature — but even then, the process was lengthy.

Msgr. Edward J. Arnister, pastor of St. Rose Parish, remembers all too well the significant damage his parish and school community sustained at the hands of Superstorm Sandy. It took four weeks before the church could reopen, and all electric, heat and air conditioning systems had to be replaced. The parish center and first floor of St. Rose High School had to be completely restored and rebuilt, and the roof of St. Rose Grammar School was torn off by wind and had to be replaced.

“I can’t emphasize enough that good planning and management by the Diocese of Trenton in having adequate flood insurance saved the day,” Msgr. Arnister told The Monitor. “St. Rose would have been in serious financial difficulty without that.” FEMA did provide some limited funding for recovery efforts.

In Congress, Smith introduced the Federal Disaster Assistance Nonprofit Fairness Act first in 2013, and again in 2015 and 2017.

Houses of worship “are hubs in our communities for humanitarian assistance year-round, and especially during times of natural disaster,” he said in an interview before the vote on his legislation as part of the budget bill.

Smith praised the Diocese of Trenton for its “professional and meticulous” response to Superstorm Sandy, noting the significant role that religious organizations play in the wake of a natural disaster.

“So many churches are directly involved in disaster relief and bring with them a cadre of committed volunteers,” he said.

“Without them, our national recovery efforts would be significantly diminished and as such, churches should not be discriminated against when applying for federal assistance,” he added.

James King, director of the Office of Social Concerns for the New Jersey Catholic Conference — the public policy arm of the state’s Catholic bishops — visited Puerto Rico in the wake of Hurricane Maria, which left in its path significant devastation. King was on hand to support Catholic Charities efforts on the island.

Reflecting on his experience, King shared his observations on how church communities stepped up to provide support to victims, despite the significant damage sustained by those communities themselves.

“I worked with local parishes that converted parts of church buildings into distribution centers for essential items like food and water, despite damage to those buildings,” King said. “Throughout my deployment, I heard numerous times that if it were not for the Catholic Church having numerous facilities throughout the island, some towns would not have received these essential items.”

Karas is a correspondent for The Monitor, newspaper of the Diocese of Trenton.

PREVIOUS: Imagining a world with papal wish of nonviolence as a style of politics

NEXT: Therapy, Retrouvaille and the sacraments offer hope to failing marriages