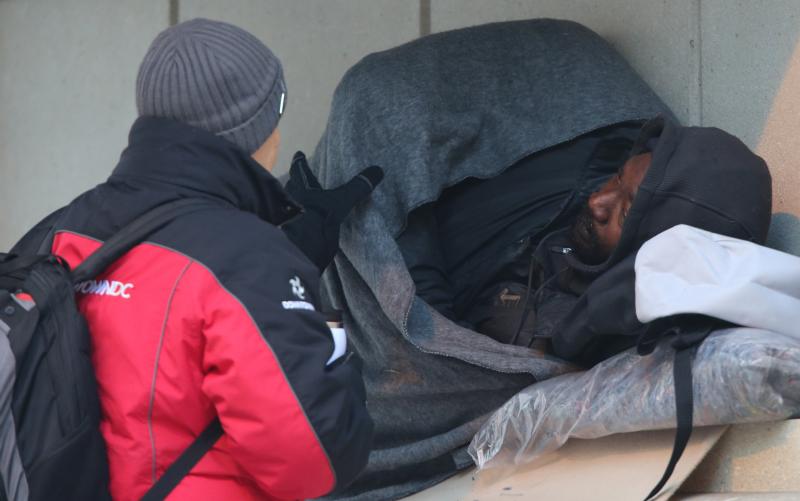 WASHINGTON (CNS) — Catholic advocates visited Capitol Hill Feb. 6 hoping members of Congress were ready to listen to their push for a federal budget that makes the needs of poor and vulnerable people a priority.

Coming at the end of the annual Catholic Social Ministry Gathering, their visits took on greater urgency as Congress faced a Feb. 8 deadline to pass a budget deal or approve another stopgap spending measure to keep the government operating.

The advocates’ main concern stemmed from the willingness of some in Congress to consider deep cuts in the social service safety net to offset part of the $1 trillion deficit expected over the next decade under the tax reform bill passed in December.

Other “asks” included a path to citizenship for 1.8 million young adults who were brought illegally into the country as children; increasing the value of the Low-Income Housing Tax Credit, a primary vehicle that helps finance new affordable housing projects; and maintaining “strong and vibrant investments” in diplomacy and overseas development that leads to peaceful societies.

Even with a budget that spares deep cuts for the fiscal year that ends Sept. 30, there’s talk that the 2019 budget plan due out in mid-February from the Office of Management and Budget will zero in on the very programs the advocates want to protect for a significantly smaller share of the federal pie.

In the current Washington environment there are other concerns, of course — climate change, education, Social Security, the minimum wage and worker rights, to name a few. For now though, social services, housing and international aid were deemed the most pressing by the U.S. Conference of Catholic Bishops, Catholic Relief Services and Catholic Charities USA.

Trying to determine what issues are most important on any given day has given headaches to the three agencies as they see new crises emerge daily and the stances of President Donald Trump shift, seemingly, hour by hour.

Still, the three agencies coordinate as much as possible to ensure there is a consistent message coming from Catholics.

“On the budget stuff, we work on a one-church strategy,” Bill O’Keefe, vice president for government relations and advocacy at CRS, told Catholic News Service.

International humanitarian and poverty-reducing aid has long been supported by CRS and the USCCB. Funding for international programs including disaster assistance, peacekeeping operations, and the President’s Emergency Plan for HIV/AIDS Relief, or PEPFAR, totaled about $24.5 billion in fiscal year 2017. That’s about 0.5 percent of the federal budget, noted Stephen Colecchi, director of the USCCB’s Office of International Justice and Peace.

At Catholic Charities USA, addressing the need for affordable housing remains a priority and for officials there increasing the value of the Low-Income Housing Tax Credit, or LIHTC, is a must.

The tax credit has funded 30 percent of the nation’s 10 million affordable housing units. Catholic Charities agencies nationwide use it as a tool to attract investment in the housing projects they develop.

However, the tax reform act is expected to make the credit less attractive to investors.

With the corporate tax rate reduced from 35 percent to 21 percent, high-level investors are less likely to invest in the construction of new affordable housing projects to take advantage of LIHTC, Stephen Caprobres, executive director of Housing for Hope, Inc. of Catholic Charities Community Services in the Phoenix Diocese, said during a social ministry gathering workshop.

The country already faces a shortage of more than 7 million affordable housing units and should fewer projects be built, housing advocates fear the crunch will worsen.

Social ministry gathering delegates and Catholic agencies aren’t the only ones concerned about potential budget cuts in social services. Nearly 1,000 women religious voiced their views in letters to House Speaker Paul Ryan, R-Wisconsin, that were supposed to be delivered to his office on Capitol Hill in December.

Two women religious from Ryan’s district, Dominican Sister Erica Jordan of Kenosha and Franciscan Sister Ruth Brings of Janesville, were scheduled to meet with Ryan’s deputy chief of staff, but the meeting was canceled by the time their plane landed in Washington, according to the Catholic social justice lobby Network.

Sister Kathleen Kanet, a member of the Religious of the Sacred Heart of Mary in New York City, told CNS she came up with the idea of religious sisters writing letters as she read news reports about Ryan, who is Catholic, discussing the need for spending cuts to help balance the federal budget. Network helped coordinate the effort.

Sister Kanet said she thought the speaker should hear from women religious, many of whom see the daily struggles of families living in poverty.

“I’m thinking who can challenge that in the light of Jesus,” she said. “It became so clear to me that religious sisters can do this.”

As of Feb. 7, the letters had yet to be delivered. Network leaders were determining how they might be helpful as budget drama unfolds.

PREVIOUS: Catholics gather on Hill to pray lawmakers will protect the Dreamers