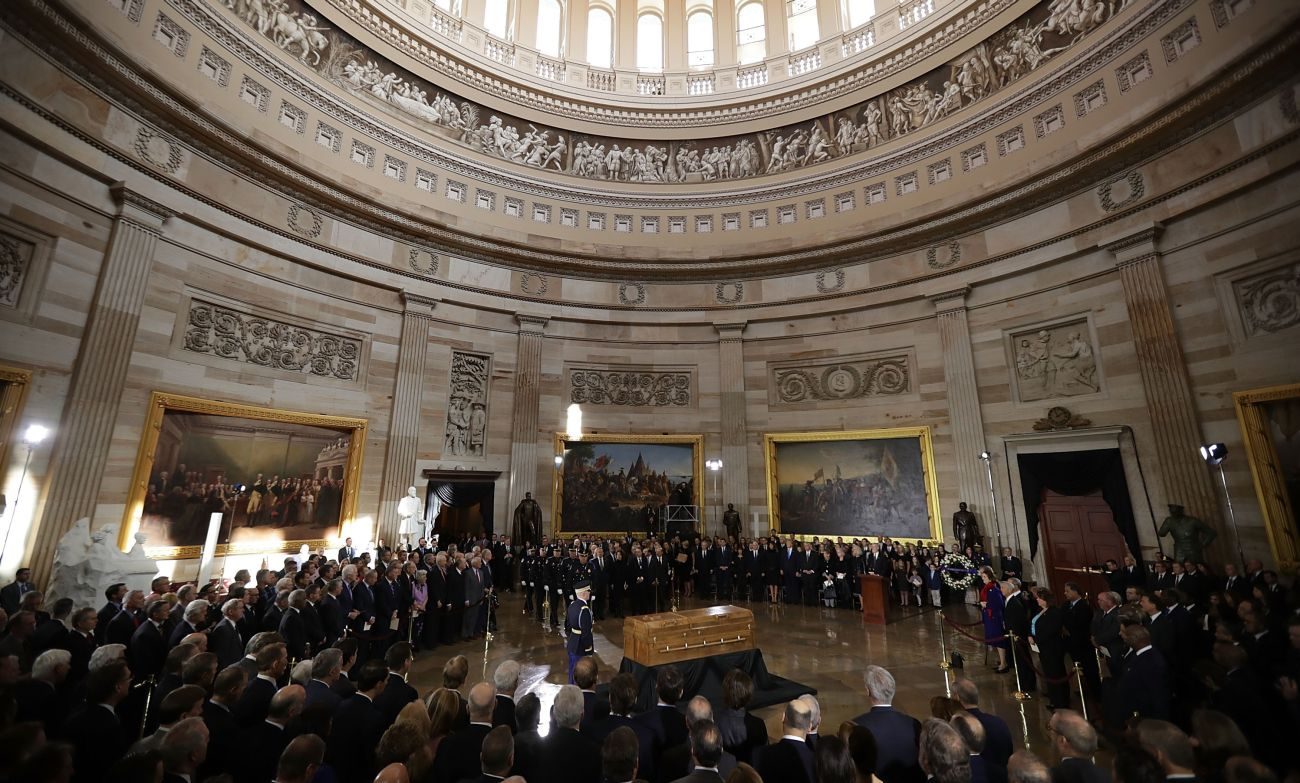 The casket with the body of the Rev. Billy Graham lies in honor during a ceremony in the U.S. Capitol Rotunda in Washington Feb. 28. (CNS photo/pool, Chip Somodevilla via Reuters)

WASHINGTON (CNS) — President Donald Trump and congressional leaders paid tribute to the Rev. Billy Graham Feb. 28 in a brief ceremony before the public could pay respects to the evangelist while he lies in honor at the U.S. Capitol Rotunda.

“Today we give thanks for this extraordinary life. And it’s very fitting that we do so right here in the Rotunda of the United States Capitol, where the memory of the American people is enshrined. Here in this room we remember America is a nation sustained by prayer,” said Trump.

Rev. Graham, who died at age 99 Feb. 21 at his home in Montreat, North Carolina, was known as “America’s pastor” and was a spiritual adviser to 13 U.S. presidents, from Harry S. Truman to Trump.

He is the fourth person to lie in honor at the Capitol. The last person to have this honor was civil rights icon Rosa Parks in 2005. U.S. Capitol Police officers Jacob Joseph and John Michael Gibson, who were killed in the line of duty in 1998, also received the honor.

Members of Congress and Cabinet members attended the private ceremony along with Rev. Graham’s family. Senate Majority Leader Mitch McConnell, R-Kentucky, and House Speaker Paul Ryan, R-Wisconsin, received the casket when it arrived at the Capitol.

Trump told the assembled group that he heard Rev. Graham address a crowd at Yankee Stadium because his father, Fred Trump, “who was a big fan,” wanted the family to attend.

Paul Ryan, who is Catholic, said Rev. Graham’s message to presidents, leaders and ordinary people alike “never diminished” and said the well-known preacher was “made great not by who he was, but by who he served, with all of his heart and all of his soul, and all of his mind.”

“When our country was on its knees he reminded us, he convinced us, that is exactly when we find our grace and our strength,” he added.

McConnell said Rev. Graham was more than a personal success story noting that the evangelist’s life was always focused on preaching the gospel.

And this preaching is how he was best known and will likely be remembered. The stadium events where he preached around the world were called Billy Graham crusades. At these venues, including a 16-week run at New York’s Madison Square Garden in 1957, he spoke to the crowds about Jesus and invited people to accept Jesus as their Lord and Savior.

He also reached at least 210 million people through his personal appearances and through his radio and television ministries.

Rev. Graham’s body will lie in honor Feb. 28 and March 1 before it will be returned to North Carolina for his private funeral March 2 at the Billy Graham Library in Charlotte.

PREVIOUS: Dozens of Catholics arrested as they call on Congress to help ‘Dreamers’

NEXT: Supreme Court says government can detain some immigrants indefinitely